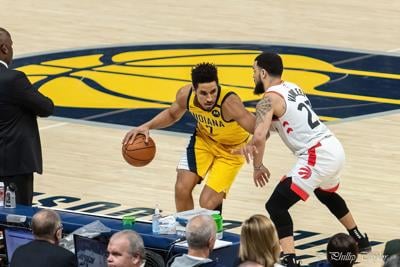 With a grandfather who marched alongside Martin Luther King Jr., Malcolm Brogdon says civil rights issues have always been at the foundation of his being.

“Learning that, for me, was as important as learning math and science — it was more important,” Brogdon says. “I was blessed into a family that was part of the movement from an early stage. So foundationally, in my mind, that comes before education. It comes before basketball. It comes before all these other things in your life. Knowing who you are and your identity, and who you represent and what you stand for.”

Since taking part in a peaceful Atlanta protest against police brutality and racial injustice on May 30, Brogdon has continued to use his platform for change, even writing a piece for USA Today on what we must do as Americans once protests have faded.

As protests have taken place across the country following the murder of George Floyd, Brogdon says he’s been in regular contact with Pacers head coach Nate McMillan.

“Me and Coach McMillan have actually been in constant communication separately, just me and him one-on-one on the phone,” Brogdon says. “[We’ve been] talking about ways that I can continue to make an impact and continue to keep this conversation and solutions in people’s mind. I think he’s been great, to have a coach like that. To have a Black man as a coach that strongly identifies as being Black and is supporting me in everything I’m doing and also probably sees himself in me when he was my age.”

Brogdon has also had conversations with his teammates surrounding the topic of white privilege.

Once Pacers players return to Indianapolis in anticipation of the NBA season’s return on July 31, Brogdon says he would even be open to leading a march of his own alongside teammates.

“I’ve talked extensively about having a march in Indianapolis at some point when me and my teammates get back, and the Pacers leading that,” he says. “That would be awesome, but that’s all about timing.”

Additionally, Brogdon will look to make a bigger impact in the Indianapolis community via a new foundation he’s starting.

“It’ll be launching later this month or early next month, and we’re really going to focus on three to four schools in Indianapolis,” Brogdon says. “We’ve already built a close relationship with a charter school in downtown Indianapolis, where it’s predominantly minority children. We’re focusing on schools that have mainly blacks and Hispanics — the population of people that are underserved. We’re going to have a mentoring program and also a literacy program at each of those schools.”

All in all, Pacers president of basketball operations Kevin Pritchard couldn’t be happier to have a leader like Brogdon as a member of his team.

“I’m watching and talking to Malcolm Brogdon everyday. He’s not a star — he is a superstar,” Pritchard says. “What he’s doing in the community…this organization is so proud. We’re watching him. His platform is growing. He wants it, and that’s something that we can get behind.”

The Indiana Pacers stand united in their fight against racial injustice

In recent weeks, players and staff have made their stances clear on the fight for equality.