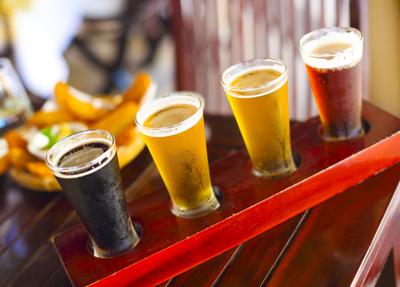 Attending Friday's VIP and Rarities Session gave me a chance to visit with most of the 49 breweries and guests [including homebrewers], each pouring two exclusive beverages not on tap on Saturday. I especially savored the fruit brews, adding a bit of color and zest to the gray days we've been having. Balance and layers of flavors marked all, with more emphasis coming through sipping while chatting. I opt for just a few sips in the small tasting glass so I can cover a wider swath. The best part is catching up with brewers, what's happening in their communities and neighborhoods, ooing over new photos of kids— the newly born and the spectrum amazingly grown up since last year's sharing. Equally affirming is catching up with attendees, who share their adventures since last year. Especially gratifying is seeing people who have moved away making a point of coming back home for Winterfest. It's the community of caring that draws us to BIG events.

"Ticket purchases not only support the not-for-profit Brewers of Indiana Guild and its mission to promote, educate and legislate on behalf of Indiana Craft Breweries; but also, raise funds for Joy's House, our local, nonprofit charity partner" summarized Scholl.

Joy's House will receive a donation in excess of $18,000 from Winterfest ticket sales this year. "Additionally, charity partners Joy's House, Raise the Bar, and The Northside Optimist Club raised $2,041, $459, and $1,161, respectively, through coat check and festival games."

Candid Winterfest photos and posts are on Facebook or Instagram. The official 12th Annual Winterfest Gallery to be published on DrinkIN.beer and Indy Winterfest By You Gallery here.

2020 marks an especially large group of anniversaries, led by the 30th anniversary of Broad Ripple Brewpub, the founding brewery of Indiana's step into the newly emerging craft beer movement. The RAM downtown marks their 20th anniversary. It's the 15th year since the founding of Michigan City-based Shoreline Brewery and Broad Ripple-based Brugge.

Rob Caputo, Executive Director of Brewers of Indiana Guild, verified the current list of the tenth and fifth years anniversaries, that exemplify the growth of small community-centric brewpubs into all corners of the state. It's ten years for Richmond-based New Boswell, and Indianapolis-based Bier Brewery.

Black Acre, Blind Owl, Deviate, FLIX, St. Joseph and Wabash. You can travel the state to get tastes of what the locals savor at Burn 'Em, The Guardian, Birdboy, Crooked Ewe, Goshen,

Next up for Brewers of Indiana Guild/Drink IN