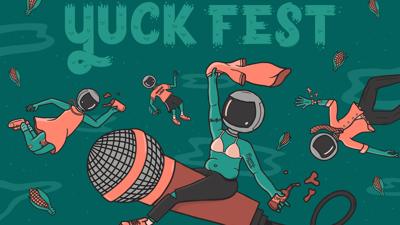 On the surface, Yuck Fest may simply look like your average comedy festival. Take one look further, however, and you’ll discover the first-annual event has its own Indy flavor.

“I’m super excited about the quality of the lineup, but I think I’m most excited about [the fact] that we’re doing it a little bit differently than most comedy festivals that you would see in other cities,” says festival co-founder Katlin McFee.

“We’re involving a lot of different scenes. We have music acts. We have some acts coming in that could fall between comedy and music,” McFee continues. “I like that we’re starting a good comedy festival, but also that it’s still a little bit different and specific to Indianapolis as far as involving more variety acts.”

Presented by Indy’s own Rocketship Comedy, Yuck Fest will take place from April 24 to 28 across several Indianapolis venues. As McFee mentioned, the lineup features a diverse selection of performers, including stand-up comedians, musical acts, and everything in between.

For its first year, Yuck Fest will welcome Andy Kindler (Bob’s Burgers, Everybody Loves Raymond, Maron) as a headliner, while also drawing several other acts into town from across the country. In addition to these noteworthy visitors, however, Yuck Fest will also feature a healthy helping of local talent, with prominent Indiana acts appearing on each and every bill throughout the festival’s five-day run.

Originally started in 2011, Rocketship Comedy blossomed out of a show that comedian Cam O’Connor first started at the Sinking Ship.

“In 2011, there were some little shows around town and an open mic or two, but you really had to do clubs,” says Yuck Fest co-founder O’Connor. “Isaac Landfert [the third Yuck Fest co-founder] had actually already started his White Rabbit show, so that showed me you could do it.”

“Instead of calling it ‘Cam O’Connor Presents,’ I just called it Rocketship Comedy,” O’Connor adds. “At one point, I got burnt out doing everything by myself, and I gathered a bunch of the youngsters that I liked. We’re lucky that we’ve got so many quality people that we’ve been able to plug in.”

To this day, O’Connor says the “Rocketship family” consists of about 30 people, give or take. One of these, of course, is McFee, who approached O’Connor about the Yuck Fest idea (which was inspired by her own series at State Street Pub showcases called Go Yuck Yourself).

“It was kind of a no-brainer after we’d talked about it a while,” O’Connor says about Yuck Fest. “We were like, ‘Fuck it. Let’s do this.’ Luckily, there’s been a good response, and we seem to have a decent enough reputation with folks.”

With this being said, the Yuck Fest organizers had good fortune with booking the performers they so desired.

One of the out-of-town comedians that Yuck Fest will be bringing to town is Whitney Chitwood, a Chicago comic who recently received some very kind words of encouragement from Maria Bamford.

“The whole Rocketship crew is fantastic, and I adore them,” says Chitwood, who has an album coming out on the near horizon via Stand Up! Records. “I got to headline LGBTQlol, and that was incredible. Everybody is just super loving, fun, and down to laugh [in Indianapolis].”

Headliner Andy Kindler shares a similar sentiment to Chitwood when it comes to Rocketship Comedy and the work they’re doing in Indy.

“These guys are great,” says Kindler (read his full interview here). “They’re creating what used to be called ‘alternative comedy.’ But now, most comedy is that way.”

Local musician/comedian Duncan Kissinger will make two appearances at Yuck Fest on Friday and Saturday, performing one set of music and one set of stand-up (both at State Street Pub). Having worked with McFee and the Rocketship crew on numerous occasions now, he’s excited to see the moves they are making.

“It’s nice seeing friends realize they can do anything they want,” Kissinger says. “Once we realize our creative dreams, then we can turn our focus on humbling the ruling class.”

With all of the shows he has a hand in, Landfert is always looking to turn Indy audiences on to lesser-known talent. This is again the case with Yuck Fest.

“With doing independent shows, the takeaway is always that you want people to be surprised,” Landfert says. “It’s the same with comedy, music, or anything. [You want people to] realize that you don’t already have to know somebody’s name to give it a shot.”

At the end of the day, Rocketship Comedy’s intent with Yuck Fest is simply to foster even more interest in Indy’s local comedy scene.

“I basically want to show off our city, show off all of our funny friends to this city, and illuminate some of these cool-ass venues that have been so welcoming, understanding, and patient with stand-up comedy,” O’Connor concludes.

Author’s Note: Yuck Fest is yet another example of an Indianapolis festival that’s come together through grassroots efforts. In recent years, several other local events have also sprung up in this nature, whether that be Chreece, Virginia Avenue Music Fest, Woo Grl Fest, or what have you.

In looking at Indianapolis’ music and arts festivals overall, what is one common thread you see in the ones that succeed?

The fest will take place in the heart of Fountain Square from on Saturday, Sept. 7, bringing internationally acclaimed queer artists to the Circle City.