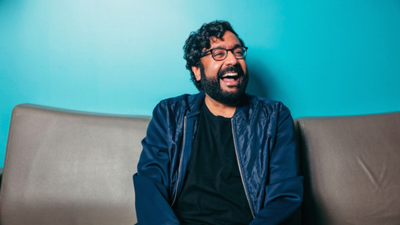 Comedian Hari Kondabolu knows that you might not laugh at every joke of his right away. Ultimately, however, all the New York native asks is that you stay attentive throughout one of his stand-up performances.

“Some people are very thoughtful, and they don’t react immediately but I do know they’re taking it in,” Kondabolu says. “What else can you ask of an audience? You just ask them to pay attention and give you a shot. It doesn’t mean the joke is going to be a home run every time. But they’re going to give me a chance to actually take a swing, and I appreciate that.”

On Tuesday, March 10, Kondabolu will visit Indy’s Helium Comedy Club for a rare Tuesday night show at the downtown venue. Ahead of his performance, Seth Johnson caught up with the New York native for a phone interview, discussing President Trump, universal health care and much more.

SETH JOHNSON: You talk about your mom a lot in your stand-up. That said, was your family supportive of your original decision to pursue a career in comedy?

HARI KONDABOLU: When I was doing it in high school and college, they saw it as a phase or a hobby. As it got bigger, I think it was surprising [to them]. Because they were never anti it completely — it was just not really realistic. Right after I graduated college, I told my mom, “I think I want to pursue this.” And she was like, “No. Absolutely not. That’s ridiculous.”

I went to Seattle and started working as an immigrant rights organizer. I was doing work I really loved and then doing comedy at night. The next thing I knew, I got discovered. I had a manager and was on Jimmy Kimmel Live. Then, they [his parents] were like, “Huh. This is a little more realistic than we thought.”

I still went to get a masters and didn’t pursue comedy at that point. Even with all that [I’d done], I was still kind of suspect. But after getting my masters degree, appearing on television and all that, they were like, “Okay. This kid has broken through more than we thought was possible for a South Asian in this country.” At that point, they were like, “Go for it.”

I’d been doing stand-up in Seattle through college, so I never really had to deal with how hard the New York scene was. So when I moved back home in 2008, I wanted to quit. I wasn’t used to the grind of doing comedy in front of eight people. I was like, “I’ve been on TV. Doesn’t that count?” But you realize it doesn’t in New York because New York is a hard scene. You really have to fight.

I wanted to quit a bunch of times that first year or two, and it was my mom and dad that kept pushing me. My mom wasn’t even in love with the idea of me doing stand-up, but she was honest. She would tell me, “It’s not like this is what I wanted you to do with your life, but you don’t quit things. You see them through. And if you feel like you can’t after you give it a real effort, then you can talk about quitting. But you just started here. You haven’t even really tried.”

I think the support of her and my dad in those early years was crucial. I don’t think I would’ve been able to pull through and make this a career without them.

JOHNSON: You were a former intern of Hillary Clinton. What did you learn from that experience?

KONDABOLU: One thing would be how famous she was. She had the most interns of anyone else on the Hill, and a lot of them weren’t even from New York. Everybody just wants to work for the super famous person.

My experiences were kind of limited. I was in the mailroom mostly. This was back in 2003. I was seeing her get hate mail, death threats and other ugly things from all over the country, and I was shocked. She didn’t read all of it, but she probably knew that there were lots of ugly things being sent to her constantly. So I think I understood for the first time what it feels like to be under that kind of scrutiny.

JOHNSON: In your last Netflix special, you made a joke about health care and how you’d like there to be public option. Now in 2020, most of the DNC presidential candidates have agreed that a public option is needed. What are your thoughts on where the health care conversation has gone since you wrote your joke?

KONDABOLU: I still believe that we should all have access to health care, and that it should be free. I like Bernie Sanders’ plan. Will it end up being that? I don’t know, but I think we should aim for that and see where we end up. I really don’t think we’ll end up there. But I’d rather make that the starting point and negotiate down to a public option versus starting at a public option and then getting whatever.

Obamacare was such a compromised thing that still helped the insurance industry. It gave us a few protections, and it’s certainly better than having nothing. But, why are we shooting from a lower point? If you have an opportunity, you shoot as high as you can get.

People get upset about this stuff irrationally. And once they have health care, the idea of not having it seems ridiculous. So I’m happy that we’re talking more and more from this position of, “We should have universal health care,” and that multiple candidates are saying that and have their plans. Before, very few people were this gung ho about universal health care. It feels good to know that this is becoming a normal part of the conversation.

JOHNSON: There has been a lot of talk about the large field of DNC presidential candidates in 2020. That being said, what do you see as being the biggest problem with the current primary process? (Note: This interview occurred on Feb. 27, prior to the South Carolina primary.)

KONDABOLU: Well, there are too many candidates, which I think says a lot about the nature of the party. There’s something about being able to unite around a fascist that’s pretty straightforward. But when you have a broad range of different…like, look at the age range of people who are still in the running right now. Look at the generations. Look at the policies. It’s pretty broad. From moderate to extreme left, there’s a lot of room there.

Also, it tells me that people are not happy with Bernie Sanders being in the lead. It’s really sad to read people saying that there might be a brokered convention if Sanders doesn’t have the 51%. it’s almost like saying, “If Bernie Sanders has a possibility of running against Donald Trump, we would rather just give Donald Trump the presidency.” Because if you broker a convention and give it to someone who didn’t win, I think you’re going to lose a lot more of your base than you think you are. So I really hope whoever wins it has the 51% so we can stop this talk about a brokered convention.

Democracy is already taking a bruising. You can say Trump stole the election. But if the Democratic Party is taking votes from their own party and saying, “Your vote doesn’t matter,” then what was it all for? You need to take some ethical stance, don’t you?

JOHNSON: What effect have you seen Trump’s presidency have on comedy and the way that people react to comedy?

KONDABOLU: I think more people are open to hearing about social and political things. As tired as they are of hearing about Trump all the time, I think people want relief, and people are also more informed about things.

When Trump talks, it’s not full of complex ideas or language. So even if he’s saying something terrible, people understand what he’s saying. When you have people saying, “I can’t believe he said that,” at least you know what he said. How often did you know what Obama said? His press conferences weren’t circuses in the same way.

So in a weird way, it’s made people more aware because he speaks in easy language. It’s so shocking that you become aware of issues while hearing what ridiculous things he said. So it’s crazy the degree of political literacy [he’s created] that wasn’t intended. Comedically, that’s been good for me because I’m able to explain more. Or, if I want to talk about a social issue, I can segue off of what the president said.

JOHNSON: In your last Netflix special, you reference a cautionary text you received from your mom while touring through Indiana. Can you give me the backstory behind that text, as well as what your thoughts are on Indiana now?

Indiana is a complicated state, just like a lot of states are. It’s not purely red or purely blue, and there are lots of different factions. What I do know is that people are generally polite and attentive, and the crowds I’ve had have been fantastic.

Tim and Eric Get Back to Roots with ‘Mandatory Attendance’ Tour