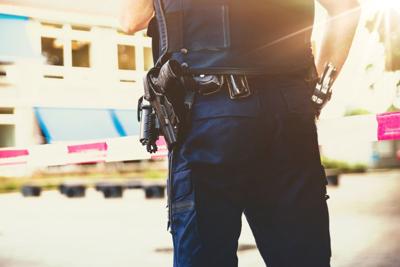 As schools nationwide scrutinize their use of police, a Chalkbeat analysis of state data shows that school police are 2.5 times as likely to arrest Black Indiana students than white students.

More than a quarter of the 1,217 arrests in Indiana schools in 2018-19 were of Black students, even though they only made up 14% of the state’s student population, raising questions of racial bias and educational inequity.

The consequences can be dire: Students who are arrested are less likely to graduate or succeed academically and more likely to be involved with the criminal justice system in the future, research has found.

“It’s state-sanctioned abuse,” said JauNae Hanger, president of the Children’s Policy and Law Initiative of Indiana. “We really need to look at our systems and how our systems are causing harm and start to address that.”

But while school systems in cities such as Minneapolis, Portland, and Denver have cut ties with local police departments, there appears to be little momentum for such action in Indiana. It’s hard to say how many police officers work in Indiana schools or how many of them have special school resource officer training for interacting with students, since the state doesn’t track that data or require the training.

In some districts, including Indianapolis Public Schools, officials say the disproportionate number of Black students arrested is “unacceptable,” and they want to reduce arrests in school. Still, officials defend the presence of police in schools as essential for student safety.

“It’s going to take a lot of work for us to get to an environment — particularly in a post-Columbine environment, post-Noblesville — where schools are going to be wholly safe without officers,” said IPS Chief of External Affairs Ahmed Young, referring to school shootings in Colorado and Indiana.

Reform advocates worry that schools face no consequences for arresting large numbers of students or disproportionately arresting Black students. Although districts are required to report arrests to the state, the figures receive little public scrutiny. That could allow teachers, administrators, and school-based police officers to over-rely on arrests, Hanger said, instead of addressing the factors leading to the incidents. Because people hold implicit biases, Black students are particularly vulnerable to arrest for minor infractions.

Even if a student is believed to have committed a crime, state law calls for the Department of Education to offer a model school discipline plan that supports arrests in schools only when “necessary to protect the health and safety of students or school employees.”

Hanger argues that many of the student arrests likely didn’t meet that standard, questioning the hundreds of student arrests that year for possession of marijuana, disorderly conduct, and possession of tobacco. The only more common offense was battery, according to state data, a charge that some contend should only be leveled in the most serious cases.

“We’ve got to be more circumspect about what we’re actually having kids arrested for,” said Gwen Kelley, co-chair of the Positive School Discipline Initiative, a project of the Children’s Policy and Law Initiative that helps Indiana schools reduce exclusionary discipline.

Student arrests fall into a larger pattern of schools imposing harsher discipline on Black students. Indiana has been highlighted for having among the worst racial disparities in the nation for suspensions, a gap that has held despite statewide efforts to soften disciplinary consequences and improve awareness of implicit bias.

One reason why attention to the problem has not brought dramatic change is because switching to less punitive discipline, such as restorative justice, is a difficult culture shift. Many educators continue to believe that strict discipline and removing disruptive students from classrooms is a more effective way to keep schools calm.

At New Haven High School, a 1,100-student campus outside of Fort Wayne, educators have zero tolerance for fighting and disrespect, said Deborah Watson, assistant superintendent of secondary schools for the East Allen district. “In order to enforce that, sometimes you have to send that strong message,” she added.

With 49 arrests last year, New Haven had one of the highest arrest rates in the state, and police were more likely to arrest Black students than white students.

Watson, who is Black, said that it’s hard to explain why the rate is so high without knowing more about the specific situations that led to arrests. She is certain, however, that the racial disparity does not reflect prejudice in the building.

Some districts have their own police departments, but many schools work with local police departments. Because the state does not track police in schools, it’s unclear whether the number of officers in schools has been growing. The latest federal data, from 2013-14, shows that about 35% of Indiana schools had police.

The public and parents look to school police officers to provide security not only from shooters, but also from more common problems, such as drugs, bullying, or fighting. Advocates for placing police in schools argue that if they are properly trained, school resource officers can serve as support for students — mentoring, building trust in law enforcement, and de-escalating conflict.

If districts remove resource officers from schools, “they are making a grave mistake,” Lyday said. “What they should be focusing their efforts on is not eliminating the presence of police in school. It should be on focusing on the required screening and the necessary training.”

Even without police on campus, schools will need to call in outside law enforcement, Lyday said. But the officers who respond may not have training or experience in working with adolescents.

Last year, for example, Indianapolis Public Schools’ police department called in city police officers to help when a fight broke out among students at Shortridge High School. After the fight, Indianapolis Metropolitan Police Department Officer Robert Lawson ordered a woman to leave and punched a 17-year-old Black student. The incident was captured on video, and Lawson faced criminal charges including misconduct and battery.

But the regular presence of police in schools can also have negative consequences for students.

“When police are in schools, we see higher arrest rates almost across the board,” said Ben Fisher, an assistant professor of criminal justice at the University of Louisville. He co-authored an analysis of federal data that found the increase is particularly large for Black students.

One reason why students are more likely to face arrest is because police officers become part of the school discipline system, Fisher said. “We’ve seen this increased criminalization of sort of minor behaviors that don’t quite conform to what the schools are asking of students but aren’t necessarily doing a lot of harm.”

In IPS, where the administration has called for public conversations on racism, the district is working to change its policing approach from the “traditional policing framework to a more nurturing framework,” said Young, the chief of external affairs.

As it stands, police are far more likely to arrest Black IPS students than other students. While Black students made up 46% of the district’s 32,000 enrollment in 2018-19, they made up 83% of the 58 students arrested.

Chief Tonia Guynn, a veteran of IPS’ police department who took over last year, said that she is aiming for all officers to go through school resource officer and racial equity training.

The police force, which has 42 officers, has also been shrinking in recent years. But Young said removing police from schools altogether is not an option district officials are considering.

The racial disparity in school arrests also affects younger students. Most Indiana students who are arrested are high schoolers, but more than 350 children in sixth, seventh, and eighth grades were arrested in 2018-19. The middle school with the highest rate in the state was in Kokomo, a small city about an hour north of Indianapolis.

At Maple Crest Middle School, which enrolled about 450 students, there were 19 arrests in 2018-19. Officers arrested a disproportionately high number of Black students.

Spokesman David Barnes of Kokomo schools declined several requests for interviews from Chalkbeat and did not respond to written questions about the arrest numbers: “Kokomo Schools has NO comment,” he wrote in an email.

Even districts that say they are attempting to reduce arrest rates also defend arresting students as an essential tool for maintaining school safety. Fort Wayne Community Schools, the state’s second-largest district, recorded 100 arrests, a higher rate than the statewide average. The district reported more arrests of Black students than of any other racial group.

Fort Wayne has made changes over the years to try to address those statistics, said spokeswoman Krista Stockman, including adding therapeutic counselors at elementary schools to address trauma and school resource officers at middle schools to build relationships.

“Having 100 arrests is still too many,” Stockman said. “Having 20 arrests would be too many. Because that isn’t what we want for our students.”

Fort Wayne is not considering reviewing the role of police officers in schools, she said. School resource officers and security officers form important bonds with students just as cafeteria workers and teachers do, she said, and the district relies on police to keep schools safe.

“I don’t think students like seeing other students arrested, but if a student brings a weapon to school, they also need to know that’s what’s going to happen,” Stockman said.

Rep. Greg Porter, the leading Democrat on the Indiana House Ways and Means Committee, is frustrated that discipline disparities have persisted for so many years. State lawmakers too often hope conversations on race will just “go away,” Porter said.

But if they wanted to, he believes lawmakers could take action to address racial disparities in education such as the discipline gap by putting money behind strategies proven to improve outcomes for Black students.

“We can’t sprinkle moon dust in the air and hopefully people will change,” he said. “We don’t need any more focus groups. We need some action groups.”