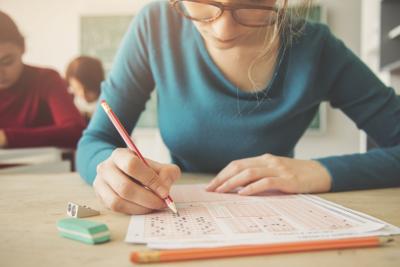 A growing number of high school students in Indiana are graduating without passing the state’s exit exam, according to newly released state data.

Indiana’s overall graduation rate remained largely steady in 2019, amid nearly a decade of stagnant results. In 2019, 87% of seniors graduated, compared to 88% in 2018. But that number drops to 76% when accounting for students who used a test waiver.

Waivers allow students to graduate without passing the state’s mandated test if they complete a list of other requirements, which can include retaking the exam and maintaining a high attendance rate and at least a C average.

The waiver option allows students with special education needs, who are English language learners, or who have just struggled repeatedly to pass the test an avenue to earn a high school diploma. But some education advocates are concerned that schools could graduate students who don’t have the necessary knowledge and skills.

Statewide, around 9,000 students used this option to graduate — the highest number the state has seen in nearly a decade. Almost twice as many students used a waiver in 2019, compared to nine years ago.

When asked about the drop in non-waiver graduates, Adam Baker, a state education spokesperson, pointed to the change in Indiana’s required exam. Graduates in 2019 were the first class required to pass the state’s ISTEP test in grade 10, as opposed to high schools’ end-of-course exams.

The state will undergo another change to the exit exam by 2023, when high schoolers will be required to take either the SAT or ACT. Lawmakers are expected this year to choose one of the college entrance exams, which will be administered by the state.

Indiana could see fewer students require waivers as it adopts what’s known as graduation pathways, which offers Indiana high schoolers multiple options for completing the requirements to graduate, thus deemphasizing testing. Students choose their path based on their interests, such as going to college or earning a technical certification.

Supporters of the approach say pathways better prepares students for careers, but critics insist the options could lower the bar for Indiana’s students and devalue the state’s diploma.

The new data also shows that virtual schools continue to post some of the lowest overall graduation rates in the state. Indiana Virtual Pathways Academy, which closed in September after the state found it inflated enrollment, saw 5.6% of its seniors graduate. Achieve Virtual Education Academy graduated 48%, and Indiana Connections Academy graduated 61%.

Nationally, only about half of virtual students graduate on time, said Gary Miron, a national policy fellow at the National Education Policy Center.

Lawmakers will have to consider these numbers as they look to improve the state’s struggling virtual schools. The stakes are high for Indiana high schoolers, particularly the population these schools say they serve: students who struggle in traditional schools.

“These schools are universally failing and we continue to send millions of dollars to them,” said Miron, a critic of virtual schools.

Among the state’s virtual schools, Indiana Connections Academy stood out with the highest proportion of its graduates relying on waivers. About half of Connections’ nearly 600 graduates used a waiver.

The school did not respond to Chalkbeat’s request for comment on Thursday.

In Marion County, almost all school districts had graduation rates above 85%. One exception: Beech Grove City Schools’ graduation rate dropped 10 percentage points from the year prior, to 79%. On the other end of the spectrum, Franklin Township had the highest graduation rate in the county, 97%.

Indianapolis Public Schools’ graduation rate remained relatively steady after three years of gains. This year, 82% of students graduated, down one percentage point from 2018.

“There is still work to be done,” said State Superintendent Jennifer McCormick in a press release. “The Department will continue to commit its resources to local districts, working together to ensure our children graduate prepared for life beyond high school.”