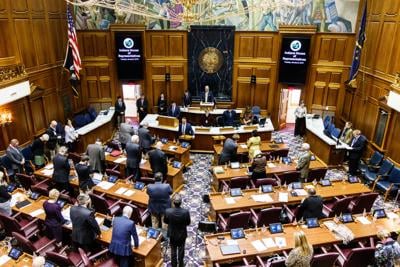 Schools won’t be punished for low test scores earned during the first two years of the state’s new ILEARN test — a move by state lawmakers Monday that will render schools’ 2019 and 2020 state grades essentially meaningless.

The House approved the hold harmless legislation 89-0, passing the bill through both chambers and showing strong support for Indiana’s first-ever multi-year exemption. The decision comes after student performance on the newly adopted state standardized test hit a new low, with only about one-third of students passing both the math and English portions.

The hold harmless, which next goes to Gov. Eric Holcomb to be signed, will prevent schools’ state grades from plummeting and teacher evaluations from being impacted negatively. But it will also make it almost impossible for the state or families to get a clear idea of how schools are performing. By the end of the hold harmless, the grades schools report could be based on scores from 2018, 2019, or 2020.

Republican leaders have hinted that broader conversations about how schools in Indiana are held accountable could come next. Some policymakers, including State Superintendent Jennifer McCormick, argue the state will have to keep passing hold harmless exemptions if the accountability system continues to rely heavily on ILEARN scores.

And the overwhelming support for the hold harmless could signal an openness to changing accountability, and a growing apprehension over the current system.

The hold-harmless exemption will prevent schools’ state grades from plummeting and teacher evaluations from being impacted negatively by allowing schools to keep the same test scores from the year before rather than new, lower scores.

Maggie Paino, Indiana Department of Education’s director of accountability, supported the hold harmless, but pointed to the problems associated with using old test scores during her testimony earlier this month. She called on lawmakers to stop state grades from being released at all until the hold-harmless is lifted.

“There would be no reliability when comparing school performance or saying this is a high-performing or low-performing school,” she said.

Lawmakers, including Senate President Pro Tempore Rodric Bray, defended creating the exemption for two years. At the beginning of session, Bray said that would give schools “ample time” to adjust to the new test, which has a new digital format and more rigorous questions.

The expectation behind this argument is that test scores will improve in the second year, but testing experts Chalkbeat previously spoke to said that might not be the case. The state’s ILEARN scores fall in line with how Indiana students scored on the National Assessment Educational Progress.

The same assumption was made in 2016, when the state passed a one-year hold harmless after changing the previous state test, ISTEP, to align with new, more rigorous state standards. But scores never saw a dramatic increase, remaining largely flat.

Caitlin Bell, vice president of policy and government affairs for the Institute for Quality Education, which advocates for school choice, urged lawmakers not to discredit low 2019 ILEARN scores. She asked lawmakers to continue publishing state grades with updated scores, even if schools aren’t punished for them.

“Shame on us for quickly moving to discount those results,” Bell said. “We are missing an opportunity to be honest and transparent about where we are as a state and where we need to go to best serve our students.”

McCormick has continued calls for Indiana to change to an accountability system that isn’t as drastically impacted by test scores. She wants the state to abandon its school grading system and keep its federal rating system for schools, which was adopted in 2017 to comply with new federal requirements.

The federal rating relies less heavily on test scores and, instead of giving a letter grade, categorizes schools as “exceeds,” “meets,” “approaches,” or “does not meet” expectations. About half of Indiana’s schools were considered to be on track to meet state expectations in 2019 — a calculation that used the low 2019 ILEARN scores.

Some conversations about changing the state’s accountability system have already started among lawmakers. The General Assembly is considering a bill that would decouple teacher evaluations from test scores — a noteworthy about-face for the state’s Republican Party, which in 2011 passed legislation requiring the measure be a “significant” factor of evaluations.

And a summer committee met to rethink how high schools are graded, prompted by Indiana’s new graduation pathways, which give students different options for earning a diploma. The committee suggested a new formula that would largely grade schools on whether students are enrolled in secondary education, employed or enlisted after graduation.

The idea saw mixed support from the State Board of Education, and lawmakers have yet to make a push to pass the idea this year.