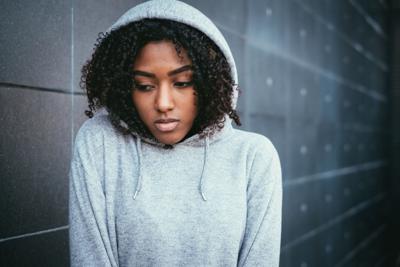 Author and activist Dr. Monique Morris described public schools as a “location for punishment” for African American girls, who she argues begin seeing educational disparities by the age of 5 in her January 2019 TED Talk. Morris explores the issue in her 2015 book, “Pushout: The Criminalization of Black Girls in Schools.” The Domestic Violence Network (DVN) will host a screening of her documentary of the same name Dec. 12 at Central Library.

“Black girls are struggling to be seen, working to be free and fighting to be included in the landscape of promise that a safe space to learn provides,” Morris said in her TED Talk.

Viral videos showing Black girls in elementary school being restrained by school disciplinary officers and a young African American woman being dragged in her seat by an officer during class illustrate this data and are disturbing reminders that Black girls often do not have the privilege of thinking of school as a “safe haven.”

Colleen Curtin, Youth Program coordinator for the DVN and the organizer of the event, hopes the screening and discussion will inspire educators and lawmakers to consider the effects that the culture of discipline has on young women of color.

“It used to be that when you got in trouble at school,” Curtin said, “you went to the office or saw the dean. Now, students are meeting with disciplinary officers. Those officers often feel compelled to treat these students like they were breaking the law on the street.”

This criminalization of minor disciplinary infractions, which overwhelmingly affects students of color, can ultimately lead to disenfranchisement from an academic setting or expulsion. That disconnect from school leads to a lack of education, idle time for high-risk activities and limited job opportunities.

Curtin argues that many instances considered to be school discipline issues are not reflective of actual discipline problems, and instead reflect an attempt to communicate that students need help. When students are punished during their attempts to get help, it’s counterproductive.

“Schools need to reevaluate how they handle disciplinary action,” Curtin said. “Behavior is communication, and in people whose frontal lobes aren’t fully developed, sometimes communication can seem like behavioral issues. If I was being punished every time I tried to communicate I needed help,” Curtin added, “I would just stop asking for help.”

If young Black girls learn from an early age that they can’t go to teachers and school staff for help, not only are they risking academic struggles, they’re more likely to stay silent about dangerous situations.

According to a Centers for Disease Control and Prevention Risk Assessment survey from 2018, Indiana ranks third in the nation for dating and sexual violence amongst teenagers.

“If schools criminalize discipline and push kids out, it can be really isolating,” Curtin said. “A lot of times, it’s hard for adults to wrap their heads around our kids dating, so instances of dating violence are referred to as ‘bullying.’ Many times, we’re talking about dating violence.”

In addition to the documentary, there will be a 30-minute panel discussion, which will consist of both a moderated conversation and an open forum with the audience. The panel will include community members such as Katie Blair of the ACLU and Crystal Haslett of the Metropolitan School District of Washington Township.

“I’m really expecting this conversation to be impactful,” Curtin said. “We need to find a way to combat this violence and change the system so schools are a place for safe learning.”

“Pushout” aims to give a voice to Black girls struggling with an educational system not designed for them to succeed, and the DVN aims to do the same through the screening.

“I would love for students to walk away from this screening with a plan for how they’re going to combat this violence in their schools,” Curtin said. “They have a powerful voice and they see what is happening in their school hallways. Our kids deserve to have a good education and feel safe at school, and that’s not the case for all students.”