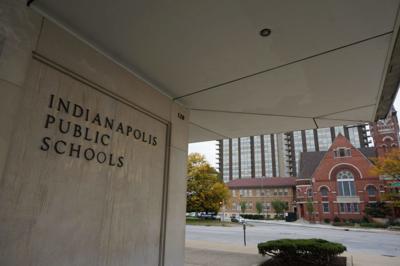 The Indianapolis Public Schools board gathered Thursday in a sureally empty room at the district headquarters, with wide gaps between those present.  Three board members phoned in, and  the reporters and observers who usually fill the room instead tuned in to watch the live video on Facebook.

The meeting — which took place in the midst of a pandemic just hours after Gov. Eric Holcomb announced that schools across Indiana would be closed at least until May 1 — was a sharp contrast with the performances, student-led flag raisings, and public comments that are typical of the district’s monthly gatherings.

The agenda was pared down to items that staff considered urgent: It included votes on approving new, outside managers for four campuses next year — all of which passed — and a resolution to give Superintendent Aleesia Johnson extra flexibility in staffing during the current crisis.

“It seems like every day, every moment, every minute, the world is changing,” said board member Evan Hawkins. “I would say, especially Superintendent Johnson, there’s a community that’s rallying behind you, and your staff have done an amazing, amazing job as we work through this. And so, I am so thrilled to stand behind and support this resolution and know that we will get through this together.”

The resolution in response to the new coronavirus will allow Johnson to give staff permission to work from home, to continue paying hourly workers who are called off because of the crisis, and to pay extra to those who must continue working — such as food service workers, bus drivers, and janitorial staff.

The district is paying hourly staff who are not reporting to work this week the same amount they would have if school was in session. Johnson said she hopes to continue that practice.

Johnson also announced plans to dramatically expand the district’s food distribution for low-income families who depend on the free breakfasts and lunches students typically receive at school. Indianapolis Public Schools is adding seven additional breakfast and lunch distribution sites, and it is launching a program in partnership with Gleaners Food Bank where school buses will deliver packages with enough food for a family of four for seven days to 25 locations throughout the city.

On Wednesday, about 1,200 students received meals from the district. That’s more than the district served during spring and summer breaks last year, Johnson said.

In the wake of Holcomb’s announcement earlier Thursday that schools would be shuttered for several more weeks, the state’s largest district is also working to plan how to educate students during an extended closure.

Although Indianapolis Public Schools has provided materials to help families with education this week, it was not considered formal remote learning. Last Friday and this week, the district is using six of the 20 waiver days granted by Holcomb as a result of the crisis. Students were already scheduled to be on spring break for the next two weeks. That buys district leaders some time to plan for remote learning. But when that break ends, educators must grapple with whether they can provide effective instruction remotely — especially in a district where many students lack access to devices and the internet.

In a call after the meeting, Johnson said the details are still uncertain but she hopes they will be able to offer remote learning in the coming weeks that would meet the bar to be considered instructional days. The district is looking at a range of ideas for tackling the challenge, including starting by focusing on serving seniors so they can graduate, incorporating paper-and-pencil instruction, and using local television.

“We have taken no options off the table,” Johnson said.

At the Thursday meeting, the board also approved plans for three district schools to become innovation schools, which are considered part of the district but managed by outside operators. A fourth campus, which is already an innovation school, will get a new manager. Most teachers at the schools are not employed directly by the district and not covered by the union contract.

Two struggling campuses — School 48 and School 67 — will be restarted as innovation schools and daily management will be taken over by charter operators. School 99 will become an innovation school voluntarily, with its current principal at the helm. Management of Emma Donnan Elementary and Middle School will be handed to a new operator.