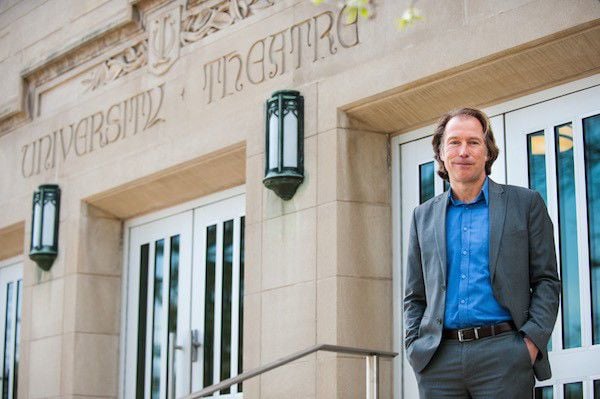 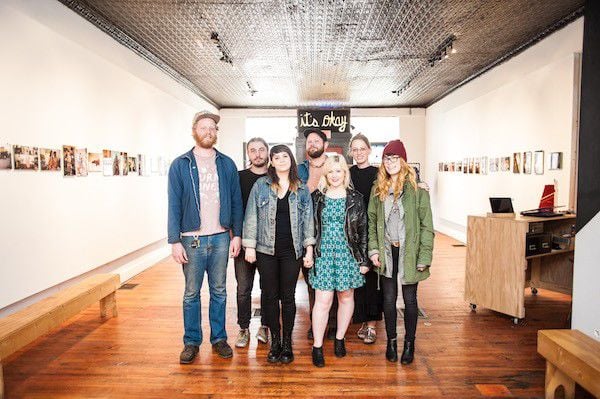 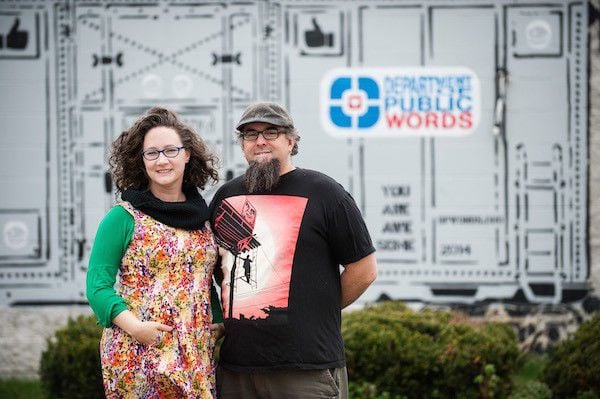 It all started with an installation. The one on top of the Murphy Art Center in Fountain Square reads "You Are Beautiful." And it grew from there, as Dave and Holly Combs built an organization devoted to putting "powerful positive messages in public spaces," from elementary schools to the Monon Trail.

"All the arts organizations that we saw had art as their goal — creating art — and for us it was never really about that," Dave told NUVO in January. "Art was a side effect of teaching kids positive life skills. So we used art as a gateway, to get our foot in the door. And then we would teach kids that they are awesome."

DPW gets kids through that door through projects like the crowd art mural. Participants draw their self-portraits, which the Combses then incorporate into the letters of a positive message. These letters are then digitally printed and installed in the school or community center. One of the murals sits in DPIndy's studio at the Murphy.

It's an art gallery. A concept shop. A makerspace. A flexible venue for concerts and poetry readings. And, yes, a collective. And it's all in a conspicuous storefront in the heart of Fountain Square. Founded in 2013, General Public has become a vibrant homebase for a diverse community of poets and musicians, artists and makers.

And it's really whatever they — or you — decide it'll be on a given night. The racks of clothes, the shelves of chapbooks and other local publications and a few other permanent fixtures are there to stay. But the space is really defined by the diversity of its programming (or happenings, if that's not too tired a term), including debut shows for artists who might just be a bit too provocative for other galleries, readings that wouldn't quite work in nearby bookstores, experimental music that works best in an intimate, supportive space.

When the Indiana University Cinema opened its doors in February 2011, founding director Jon Vickers (above) told us his goal was to establish one of the "best-recognized cinematheques in the country," a combination art house and repertory theatre making exemplary use of state-of-the-art technology (did I hear "THX certification" over all that rumbling bass?) And if it takes a few years for the rest of the country to catch up to the extraordinary things happening in Bloomington, then that's their loss.

It was an unexpected boon. Who would've thought a decade ago that a university without much of a film school would put significant money into building a cinema? That they'd locate it in the center of campus, beautifully, even sumptuously retrofitting an old theater? Another boon: Hiring a guy like Vickers who puts such an emphasis on collaboration. When he started his job, he resolved that if the cinema was going to get "high-level support from the university," he would have to "pay back," by involving the community in programming as much as possible.

IU Cinema has demonstrated what Vickers calls a sort of "fearlessness" in supporting projects proposed by town and gown alike. A highlight of The Burroughs Century, a city-wide celebration of William S. Burroughs's centennial, was a film fest at the cinema featuring rare and provocative work directed by or featuring Burroughs.

Vickers has been working away at the world's leading filmmakers for years, decades even (he had a similar job at Notre Dame before coming to Bloomington), trying to get them to come to unfamiliar territory of Indiana. And he's gotten the ball rolling. The list of visitors is impressive: Werner Herzog, Peter Weir, Guy Maddin, Ava DuVernay, Kevin Kline, Glenn Close, Edward James Olmos.

Vickers hopes that he and the IU Cinema staff will "continue to be innovators" in the coming years. He'd like to have filmmakers in residence on campus. He'd like to commission more work, perhaps short films. He'd like to develop film programs that will tour. He thinks that his "vision of collaboration has been infectious." Here's hoping that vision will go endemic.