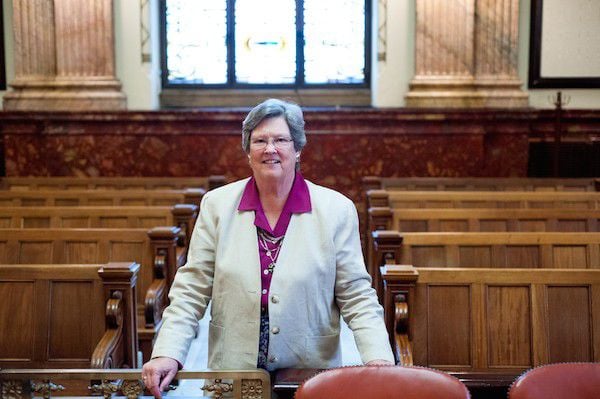 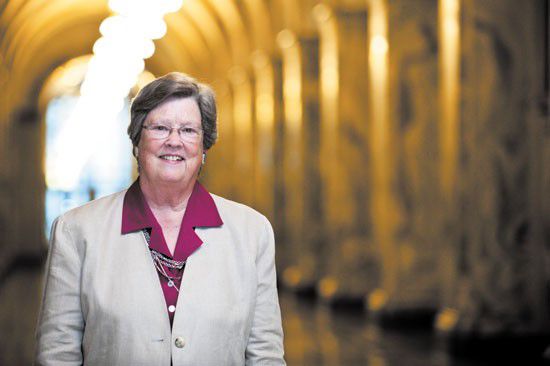 Sitting judges are often loathe to speak about cases they’ve adjudicated, especially while they’re still on the bench. “You don’t talk about it beforehand because you don’t want to invite ex parte comment,” explains Judge Sarah Evans Barker. “You don’t talk about it afterwards because you don’t defend your decisions that way. You make them as you go, and there are always more to be made. One of the best pieces of advice I received was, ‘Don’t look back.’ Just keep going. If it’s not right, there’s a process.”

Judge Barker has been part of that process for decades. Thirty years ago she became the first federal judge in the state of Indiana, nominated to the bench in February of 1984 by then-President Ronald Reagan. Shortly after her appointment, she proved that her understanding of the Constitution trumped the Reagan administration’s views on certain forms of speech: that November, Judge Barker overturned Indy’s proposed ban on pornographic materials, ruling that the ordinance’s language was far too broad and clearly violated the First Amendment. Her findings were upheld by the higher courts.

During Barker’s time on the bench for the Southern District of Indiana she found that a controversial 2008 Indiana election law requiring those voting in person to present a photo I.D. violated both the First and Fourteenth Amendments. A 2003 ruling was instrumental in improving overcrowding conditions at the Marion County jail. In 2013, Barker blocked part of Indiana’s immigration law, which, according to the ACLU of Indiana, “permitted local law enforcement officers to make warrantless arrests of people in possession of certain immigration-related documents, even though the possession of those documents is not a crime.” Regarding her ruling, Judge Barker said, “Because [the law] authorizes state and local law enforcement officers to effect warrantless arrests for matters that are not crimes, it runs afoul of the Fourth Amendment, and thus, is unconstitutional on those grounds.

Barker, who also holds the distinctions of being the first female assistant U.S. attorney and the first female chief judge in the Hoosier state, hadn’t set out to break down gender barriers. “I was the proverbial cork on the ocean. …  It wasn’t until my junior year [at I.U.] that I even had a major. I was talking to one of the advisors to student government — I was in student government — and she’s the one who said, ‘I think you should think about going to law school.’ If she had said, ‘You should be an astronaut,’ it couldn’t have been any more far-fetched.”

Barker’s advisor, though, saw that the future jurist had the necessary chops: a quick mind, a good humor, and a fine public speaking ability. Her Southern-born parents ensured that Barker and her sisters were schooled in “dramatic arts lessons. We memorized readings and poems and gave programs to church groups and school PTO groups, that sort of thing. We learned how to speak in public. “

Still, the leap from effective public speaker to attorney was daunting for a female in the mid-‘60s. “This was a time when women went into teaching and nursing — and wife-ing. ‘Wife of’ was a very good professional direction. If you were really driven, you might go to med school, but that was off the charts.” Of the 60 students in her law class, three were women, and the valedictorian found it difficult to even get a job interview. As for Barker, she wasn’t even aware she was about to make history when she first encountered the public spotlight in 1972.

“When I became the assistant U.S. attorney, I did not know I was the only woman,” Barker recalls. “I … applied for the job., went off, got married, had my honeymoon and came back — my husband was practicing law — and when I called the U.S. Attorney and he said, ‘Come in to be sworn in,’ I though it was going to be just a matter of filling out some employment papers. Instead, I walked into a full-blown press conference, with cameras and so forth.

“Lucky I wore my pearls that day.

“When I got that job … I sensed that people were watching to see if I had the stuff, Barker continues. “There were some who didn’t think I was the right person to be managing the breakthrough. I had a little bit of a ‘higher burden of proof.’ You know who was cheering for me most? The secretaries to the judges. They would do helpful things — if I needed to get a note to my husband that he had to go and pick up our kid, I could send it through the secretary. But all the judges were also very interested … They all had daughters who were roughly my age. I always had the sense they were rooting for me.”

Barker remembers vividly the day the President called her. On Valentine’s Day of 1984, Barker was in a small card shop downtown when a colleague tracked her down. “Mary [Marsh] came running into the card shop; she said, “The President’s trying to get you on the phone; come up to my office QUICKLY.”

“I went up to her office, and sat at her desk, and there was a call: Stand by, Mrs. Barker, for the President of the United States. It was Ronald Reagan himself. It was a very memorable moment. You hope you don’t say something crazy or stupid that will make him rescind the appointment.

“I said I hoped I’d never disappoint him.”

Thirty years after that phone call, Judge Barker is shifting her duties to what’s called “Senior Status” — she’s reducing her caseload, but only by 20 percent. “I’ve taken a lot of ribbing about cutting back to 80 percent,” she says, but Judge Barker, who turned 70 last year, explains that this is the best way for Indiana’s Southern District to gain another judge. “The Southern District of Indiana has had one of the highest caseloads per judge for a long time. I thought, ‘I’m the only one who can do anything about this — I’m the only one who’s eligible for senior status.’ We need another judge. It wouldn’t do any good just to vacate the seat and not contribute — and besides, I like the work. I think I’m able to keep doing it in the way it needs to be done. I say that this is my ‘slow glide path,’ says Barker with a smile.

In addition to her role as a federal judge — and her distinguished tenure as a member of a vast number of conferences and committees, including the Special Study Committee on Judicial Conduct and Disability (the “Breyer Committee”) — Barker’s active off the bench, too. Although she flatly refuses to undertake any manner of fundraising, she has volunteered on the Advisory Board for the Spirit and Place Civic Festival, she’s an emeritus board member of the Conner Prairie Foundation and the Connor Prairie Museum, a member of the board of trustees of the Indiana Historical Society and a trustee of Clarian Health Partners.

Barker says she’s involved with these civic organizations because they inform her life experience in a manner that helps bring fresh perspective to the bench. When she sees decisions being made by an organization on the front end, it brings insights to her role as someone who may have to review the decision-making process after the fact. Barker can handle the civic roles as well as the professional duties because she has “the right husband — and kids who give me the space I need.”

There have been low points in her career: Judge Barker found both government sequestration and what she refers to as “cookie-cutter, mandatory sentencing guidelines” odious. She’s been appreciative of the fact that she no longer has a lack of female colleagues, though, and she’s glad that the federal judicial system now hires based entirely on merit; gone are the days when support positions were filled via political patronage.

Finally, though, one wonders: given all she’s done, all the barriers she’s broken, did this eminently humble, down-to-earth jurist ever consider herself a feminist?

“Not in the marching in the streets sort of way, but yes, I was drawn toward that.”

She ponders the question again.

“Was I a feminist? Probably.”