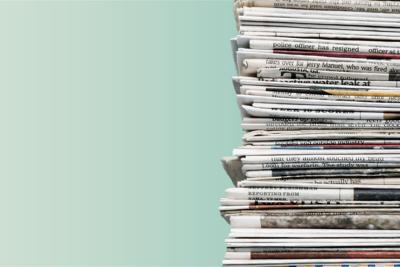 Think of it as a milestone in a minor key.

I passed my young manhood there. I was a 21-year-old intern and newly minted college graduate when I first walked through the paper’s doors. When I left, I was 39 and had been an editorial writer, columnist, political reporter, traveling feature writer, production editor, sometime sportswriter and music critic and occasional assistant city editor.

Those were good years, learning years.

I interviewed everyone from convicted murderers to presidents of the United States. I came to find that some public figures I thought I would admire turned out to be jerks when I met them and that some I was sure would be jerks turned out to be good, decent folks. I saw both how big and how small a place the world could be.

I cannot think of a better place or a better way to have spent my 20s and 30s.

They were more satisfying years for me than they were for afternoon daily newspapers.

When I hear people lamenting the struggles the news business is going through now, I often think, “What’s new?”

Those of us who first stepped into the journalism waters at afternoon dailies knew from the start that we were and always would be swimming against the tide. When I wrote my first piece for The News, the paper had a circulation of about 140,000. When the paper hit the streets for the last time, that number had dwindled to maybe 20,000 readers. Its owners had kept The News alive for that long out of principle and sentiment, not for business reasons.

The paper, like so many other afternoon dailies, had been done in by technological and cultural forces too great to resist.

Once the afternoon dailies were authoritative, even dominant sources of news in their communities. Many, maybe even most, Americans didn’t have time in the morning to read a newspaper, but the end of the workday was a good moment to catch up on the news, scan the sports scores, laugh at the comics, study the stock reports or read an advice column.

The development of sophisticated evening TV newscasts changed that. So did changes – two working-parent families, single-parent families, altered or extended work schedules – in the ways we Americans live.

The development of a nonstop news cycle provided the death blow.

In the last days, only the truly stubborn clung to the paper – elderly readers set in their ways and staffers determined to ride the ship down.

One of my colleagues at the paper cracked during the long descent that The News was “a dying newspaper for dying readers.”

Maybe, but it was a glorious death.

The folks I labored alongside at The Indianapolis News were some of the finest, most dedicated human beings I’ve known. They were smart, hardworking and fiercely committed to their principles.

That’s one reason I never know whether to laugh or scream when some politician whose head is useful only as a hat rack calls journalists “the enemy of the people.”

The folks I worked with at The News could be and often were cranks and misfits, but almost to a person they were animated by the purest sense of patriotism. Bright and talented as they were, they all could have made much better livings doing something else.

But they believed that, in a self-governing society, the people not only had a right to know but that the people needed to know. Our country wouldn’t work if the people didn’t know.

My colleagues were willing to work long hours and put up with a lot of abuse to see that the people did know.

For them, journalism was less a job than an act of faith.

The Indianapolis News died 20 years ago, a casualty in that good fight.

The battle, though, goes on – and will as long as we believe people should govern themselves. That people not only deserve to know, but that they need to know.

Twenty years ago, a paper I loved published its last.

Do I still miss it?

What do you think?