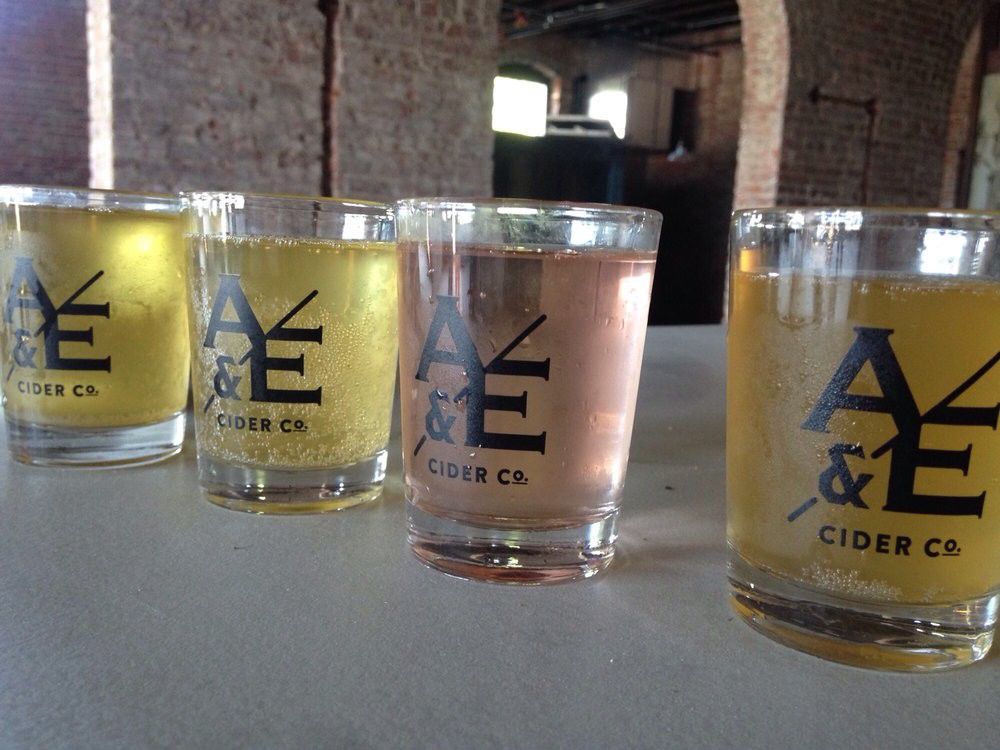 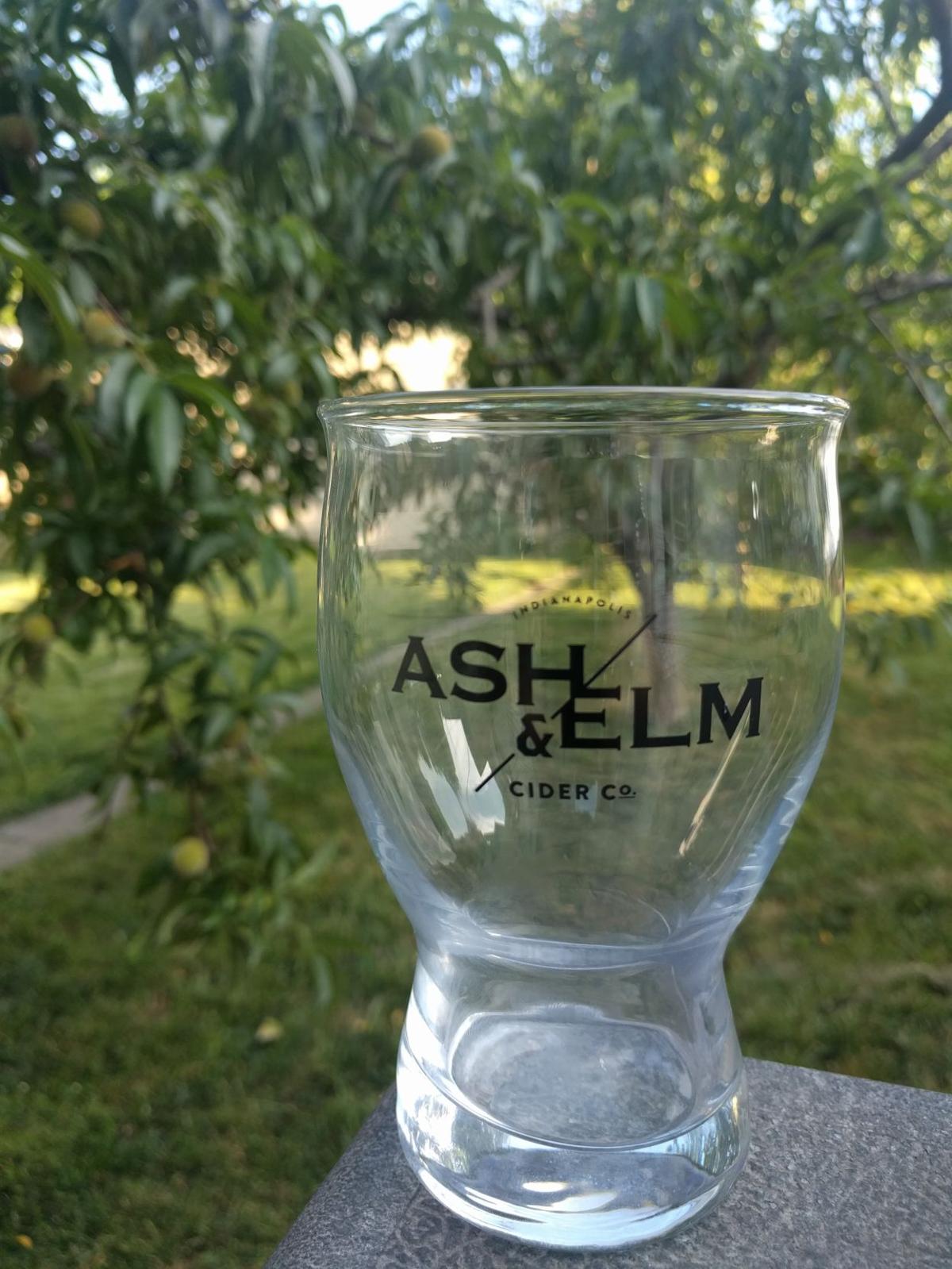 A glass from Ash & Elm's tasting room – everyone will receive a free glass at the grand opening. 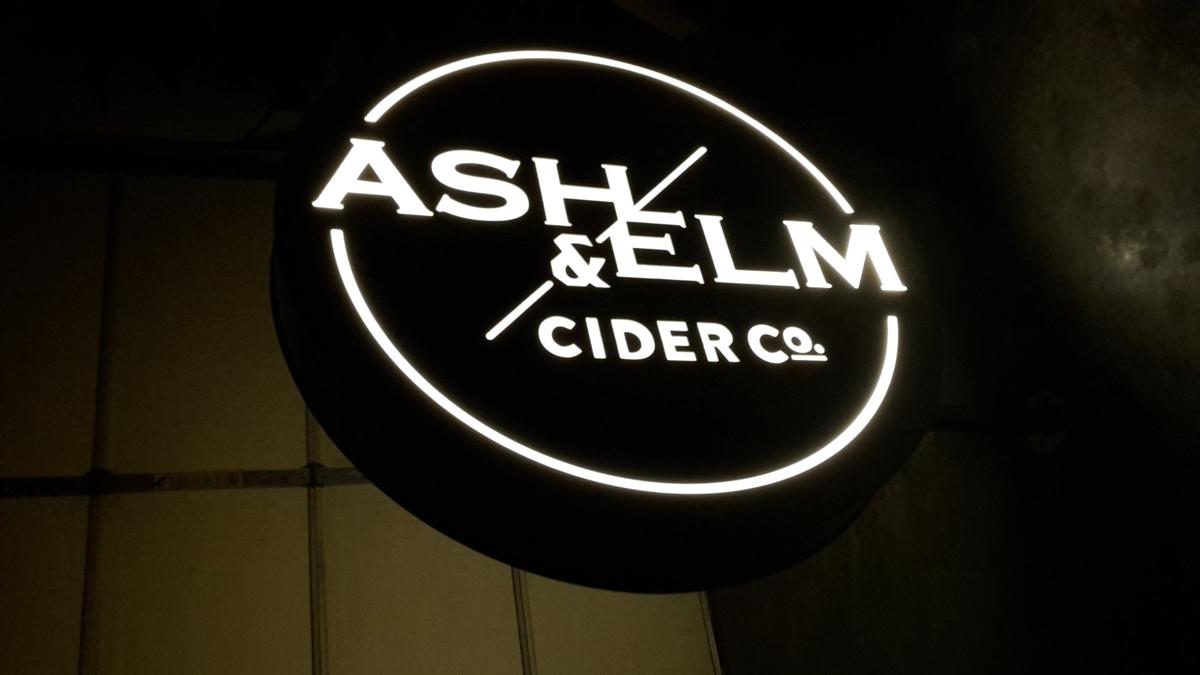 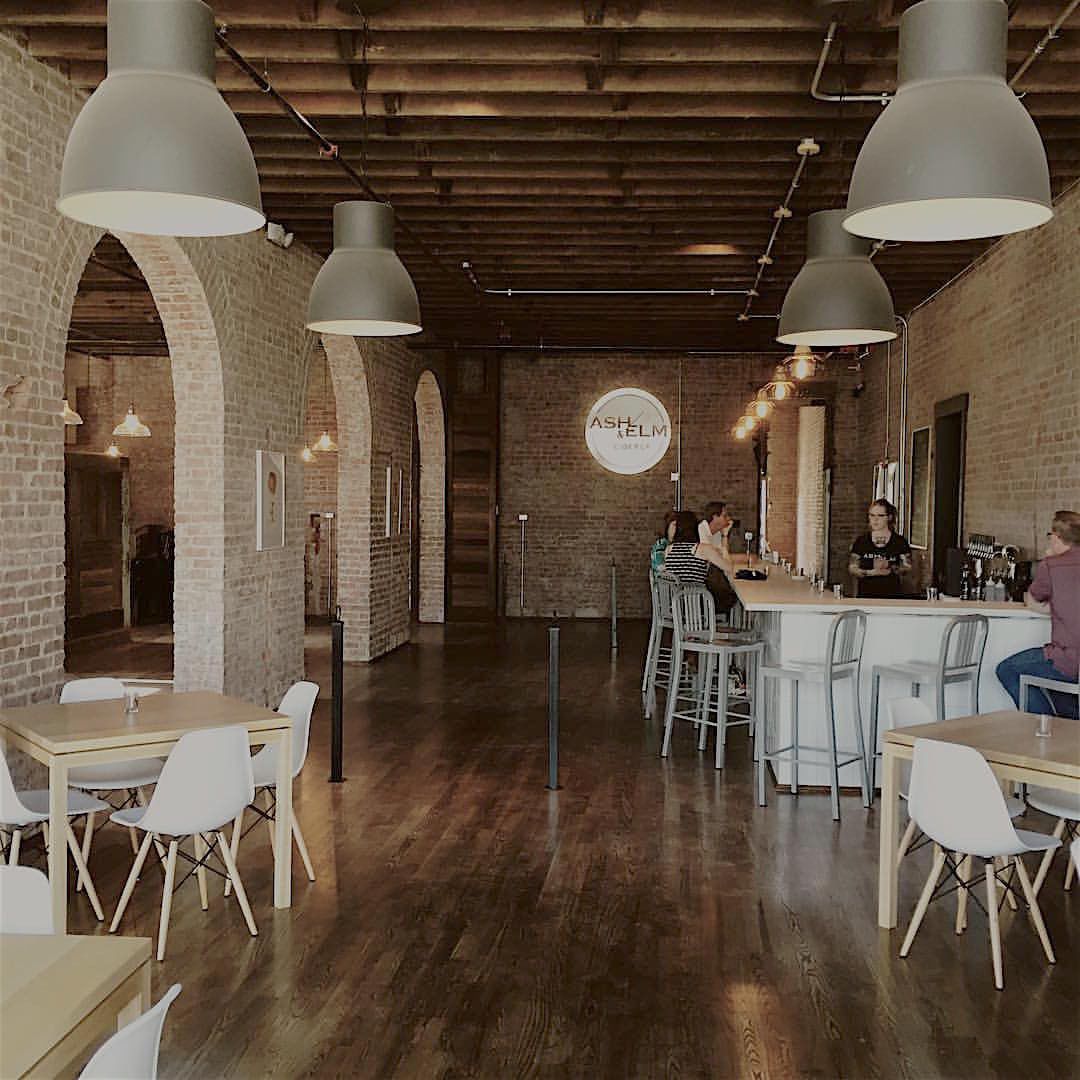 A glass from Ash & Elm's tasting room – everyone will receive a free glass at the grand opening.

Andrea and Aaron Homoya started a conversation with NUVO in January 2015, as plans for opening a cidery were taking shape. By then Aaron, an engineer by training, had been a home brewer for ten years, and both Aaron and Andrea [with a background in sales, consulting and management] had been making wine and “some spirits” for five years. Along with the usual research and hands-on for making craft cider, they traveled to the Pacific Northwest and Michigan, “where craft cider has really taken off, visiting, meeting and making friends with some of the pioneers of the craft cider movement in the States,” said Andrea. [In Indiana] “because of our long interest in craft brewing we’ve been well-connected with people in the industry. They have been super-supportive.”

Ash & Elm’s first public tasting event was hosted by Flat 12 in their Taproom in early 2015. Cideries do not have a legal classification of their own. Instead, they are considered a winery, placing cider sales under wine sales guidelines. However, cideries usually align with craft breweries because as part of an emerging craft culture.

Initially, the intent was to “source all of our apples from Indiana orchards,” explained Andrea. “After meeting with a few orchards we realized that wouldn’t be possible because we pretty much eat all the apples we grow. Because we need a consistent and large supply of quality apples year-round we’ll be getting fresh-processed juice from Michigan. We still plan to work with orchard partners in Indiana to make specialty and small batch offerings.”

With the grand opening of Ash & Elm Cidery set for June 25, NUVO again caught up with Andrea Homoya for an email interview:

NUVO: What is the allure to cider making that has sustained you [Andrea] and Aaron through an arduous 3-year odyssey to the grand opening of Ash & Elm Taproom and Production Cidery?

ANDREA HOMOYA: Part of the allure is that cider is re-emerging in an exciting way. The industry is growing, and people from the wine and beer industries have crossed over to the cider industry, each of them bringing their own takes on how cider should be made.

The dialogue about whether cider should stick to its original roots or adapt to the craft beverage explosion has kept our minds engaged and excited with the business. We feel like we get to be in the forefront of a new wave of cider-makers and inform the way the cider movement grows in the market.

ANDREA: Finding a name that wasn’t trademarked was difficult. We ended up with Ash & Elm because both of our families (and us) are really into nature; Aaron’s dad is the state botanist, and my dad is an avid birdwatcher. We both enjoy the outdoors and care a lot about conservation.

Through these themes, we thought about how ash and elm trees are native species to Indiana that are endangered. Cider was endangered for a long time after Prohibition and is just now making its resurgence. Maybe Indiana will have heirloom apple trees again in the future, and maybe ash and elm trees will thrive here too.

NUVO: Are you part of a new ‘boom’ or part of an old tradition with cider as a household staple —non-alcoholic and alcoholic?

ANDREA: We’re a mix of both. We were awakened to the idea of cider through a trip to Ireland where we ate at a small farm that served traditional cider with dinner. It was fantastic and unlike any cider we had tried before, and it really opened our eyes to what the beverage could be.

With that being said, we will be using some ‘new’ methods for making our ciders, such as adding additional fruits, herbs, spices, etc., carbonating, and kegging our ciders instead of only doing still, traditional methods. Eventually we hope to have a lineup of both ‘new’ and traditional ciders available.

NUVO: Why does the cider industry negate the term ‘hard cider’? What is the accurate descriptor?

ANDREA: It’s only in the US that people use the phrase ‘hard cider’ instead of ‘cider’ to mean the fermented, alcoholic beverage made from apple juice. In other countries they call it juice (whether it’s filtered or unfiltered), and cider (the alcoholic beverage created out of apple juice).

In the States, we differentiate between apple juice and apple cider [non-alcoholic], meaning that there needs to be another way to identify alcoholic cider. People in the industry don’t like the phrase ‘hard cider’ because it’s an unnecessary modifier added to a beverage that has existed for hundreds of years. We prefer that our product should be called ‘cider’.

NUVO: Cider has been described as more like wine than like beer. What audience are you planning to reach out to? Who do you envision as your core patrons? How is cider production different from wine and beer production? Describe cider making at your Cidery.

ANDREA: Because there isn’t a huge cider market in Indiana yet, we are hoping to educate consumers about what cider is and what it can be. Many people have only tried one style of cider before (and in the US, that is likely a mass-market brand that would tend to use more sugar and apple flavoring than actual fresh juice). If they didn’t like it, they assume they don’t like cider. We know that there are as many kinds of cider profiles as there are beer and wine, so encouraging people to try different styles of ciders to find the kind they prefer is important to us.

We hope to reach out to both the beer and wine communities, but since we’re kegging our cider, the easiest crossover will likely be craft beer-drinkers who are interested in trying something new.

The process of making cider is more similar to wine than beer. There is no heating or cooking, and there’s no water involved, like there is with beer. Instead, we get fresh juice, add yeast, and then let it ferment. The quality of the cider comes from the quality of the juice, like wine. We can control the temperature, the speed of the fermentation, and the blend of the juice in order to get the final product we want.

NUVO: Cider is described as place-centric—each cider reflects the place of origin—how so?

ANDREA: If you think of cider like wine (which it technically is), this makes a lot of sense. In the wine industry, people know that Napa grows great Cabernet grapes, and Argentina is the land of the Malbec. Similarly, the terroir of the region, the type of climate, and the where apples are grown will affect the flavor of the apples and thus their juice.

Part of what’s fun about cider in the US is that we are just starting to define what a ‘New England cider’ is compared to a ‘Washington cider’. Aaron and I hope to help define what a ‘Midwestern cider’ can be.

NUVO: Describe your core ciders, specials and seasonals. What makes Ash & Elm Cider Co. products unique from all other ciders?

Semi Sweet – this is the most like the ciders that are already out there. It’s a ‘gateway’ craft cider, where it’s similar in sweetness and effervescence, but uses all fresh juice with no added flavorings. We anticipate this will be our biggest seller.

Dry – the Dry is a version of the semi-sweet but has less residual sugar. This is more for people who prefer dry wines, and in fact, tastes a lot like an apple-y white wine.

Hopped – This is a very dry cider that is dry hopped with Citra hops. The hop aroma comes through, but there’s no bitterness since the hops are never heated. What you get is a very unique flavor that is tart and drinkable.

Cherry – The cherry is a bit sweeter than the semi-sweet and includes fresh cherries in the fermentation. It comes out pink and is really refreshing.

NUVO: Your location on the near Eastside at 2104 E. Washington Street & North Hamilton Street places you along the Historic National Road and in a building with a history dating from 1900. What is the history and how are those stories essential to the character of Ash & Elm Cidery & Taproom?

ANDREA: The tasting room is in a beautiful historic building. It was an Oddfellows lodge, a pharmacy and a night club, among [many] other things. The landlord has really worked to preserve that character of the building.

While the building is historic and beautiful, our design within leans toward the modern, with concrete, subway tile and natural woods. The space brings together the old and the new, and cider – with its long tradition and recent reemergence – does the same.

Editor’s Note: For a fuller story of the building and how it was saved from demolition in 2013 as part of the East Washington Street Vision Plan, see THIS and THIS.

NUVO: For the past two years you have been sharing at festivals and other public events, waiting to open your own Taproom. What did you learn ‘gypsying’ over the past two years? What do you envision for Ash & Elm Taproom as a special part of the East Washington Street Neighborhood?

ANDREA: Being at festivals and events has been awesome over the last two years! We’ve gotten a lot of feedback that has helped us tweak our recipes, and has also reminded us to just keep going as the business side of things took longer and longer. We want the tasting room to be a place for everyone, but as Near East-siders ourselves, being able to share our products with our friends and neighbors is especially gratifying. We took a lot of care to bring a nice environment into a neighborhood that has very few places like that.

NUVO: What else do you want NUVO readers to know?

Our tasting room will have food, which will ramp up slowly as we get things going. Long term, we’ll have a few sandwiches, snacks and salads for people to enjoy with their cider. The correct way of saying our name is “Ash & Elm Cider”

This event is co-hosted by Yelp; RSVPs are required for each person attending. RSVP to the event by clicking HERE.

The notice informs: “Parking is limited, however, there is a lot across the street from our tasting room at the Auto Value store. Street parking is available and Willard Park has bike racks and is just a couple minutes away from Ash & Elm, so bikers are encouraged. The cidery's tasting room is all-ages, so feel free to bring your kids. Food trucks will be on-site, and the A&E kitchen will be serving select bar snacks as well. Tours will be available by the Head Cidermaker throughout the event.”