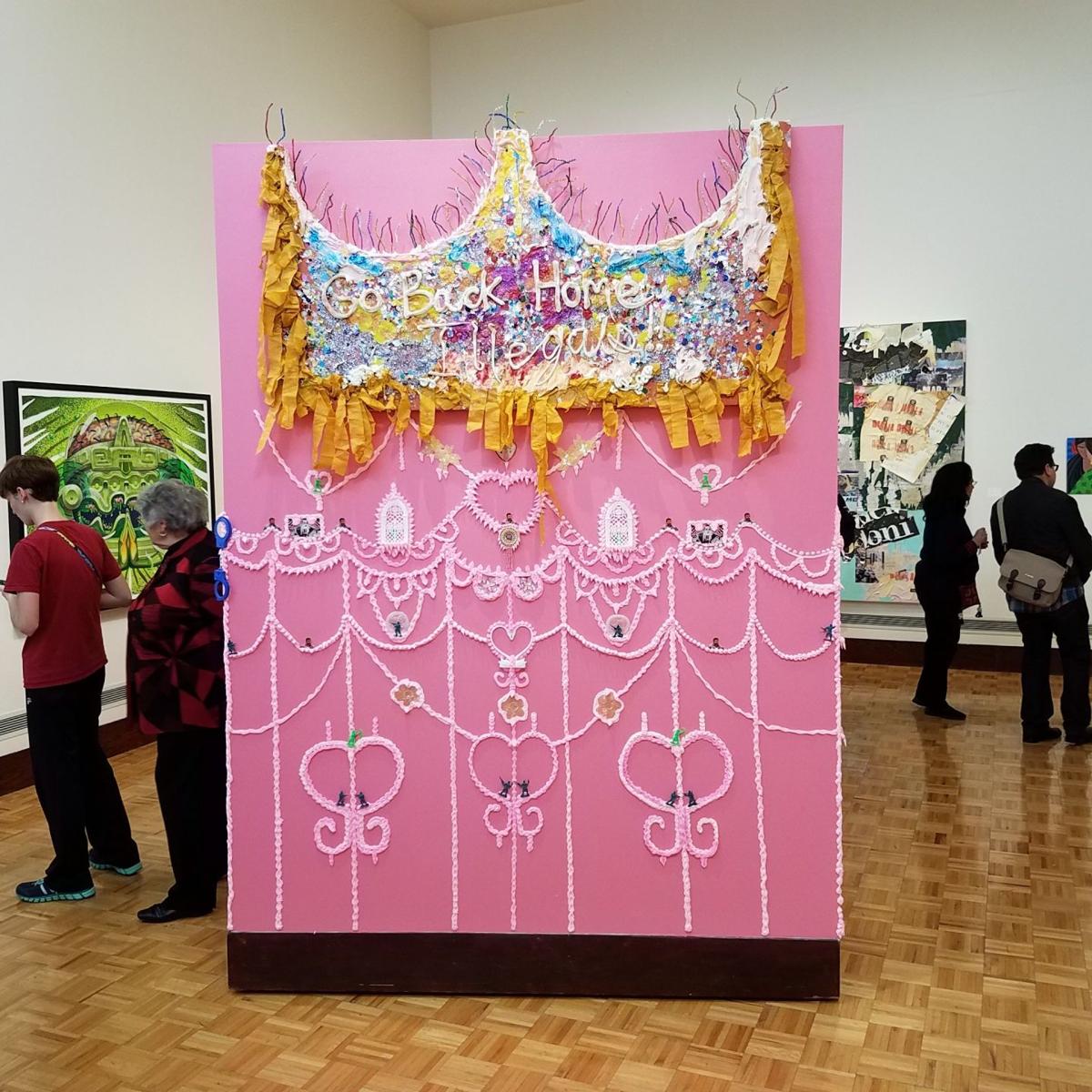 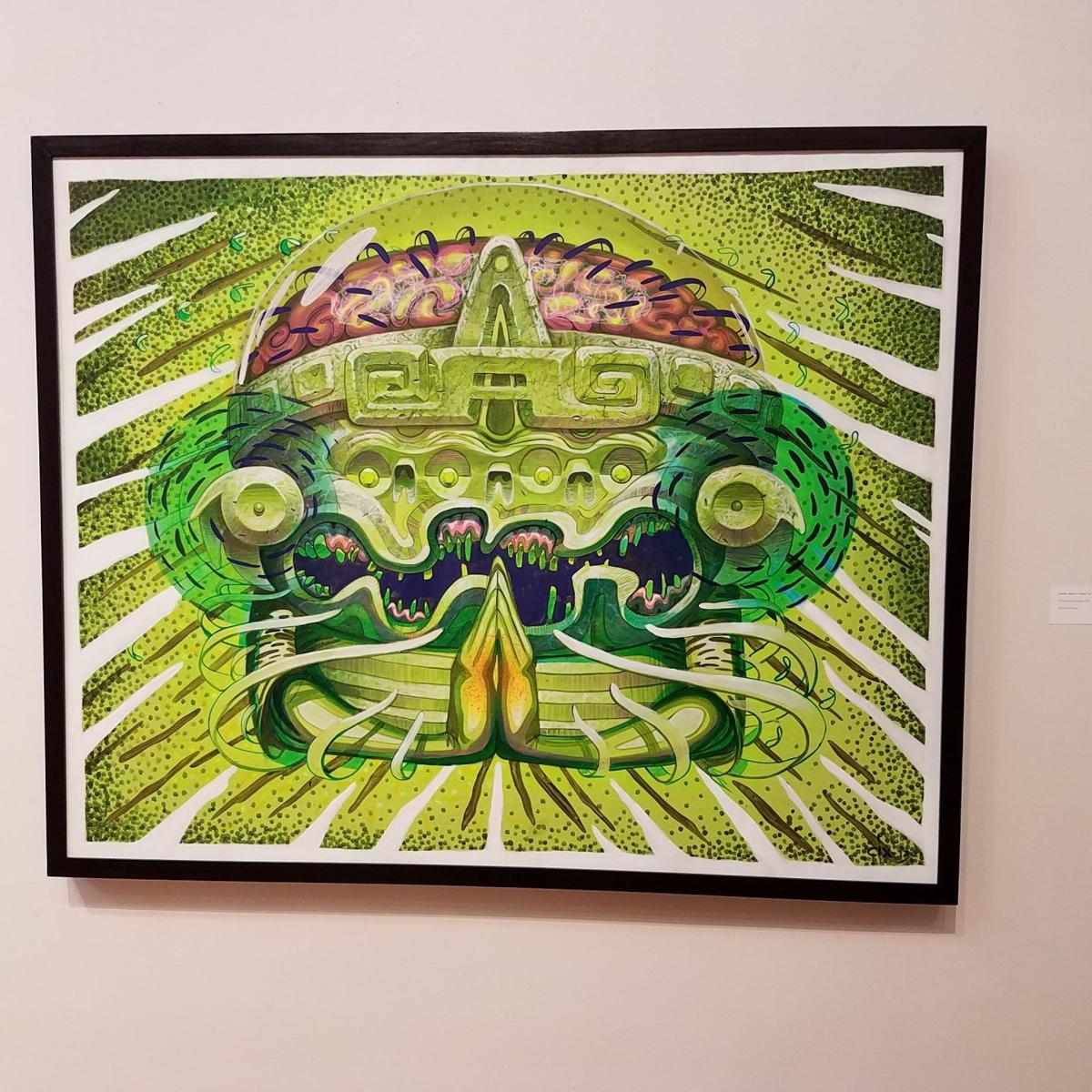 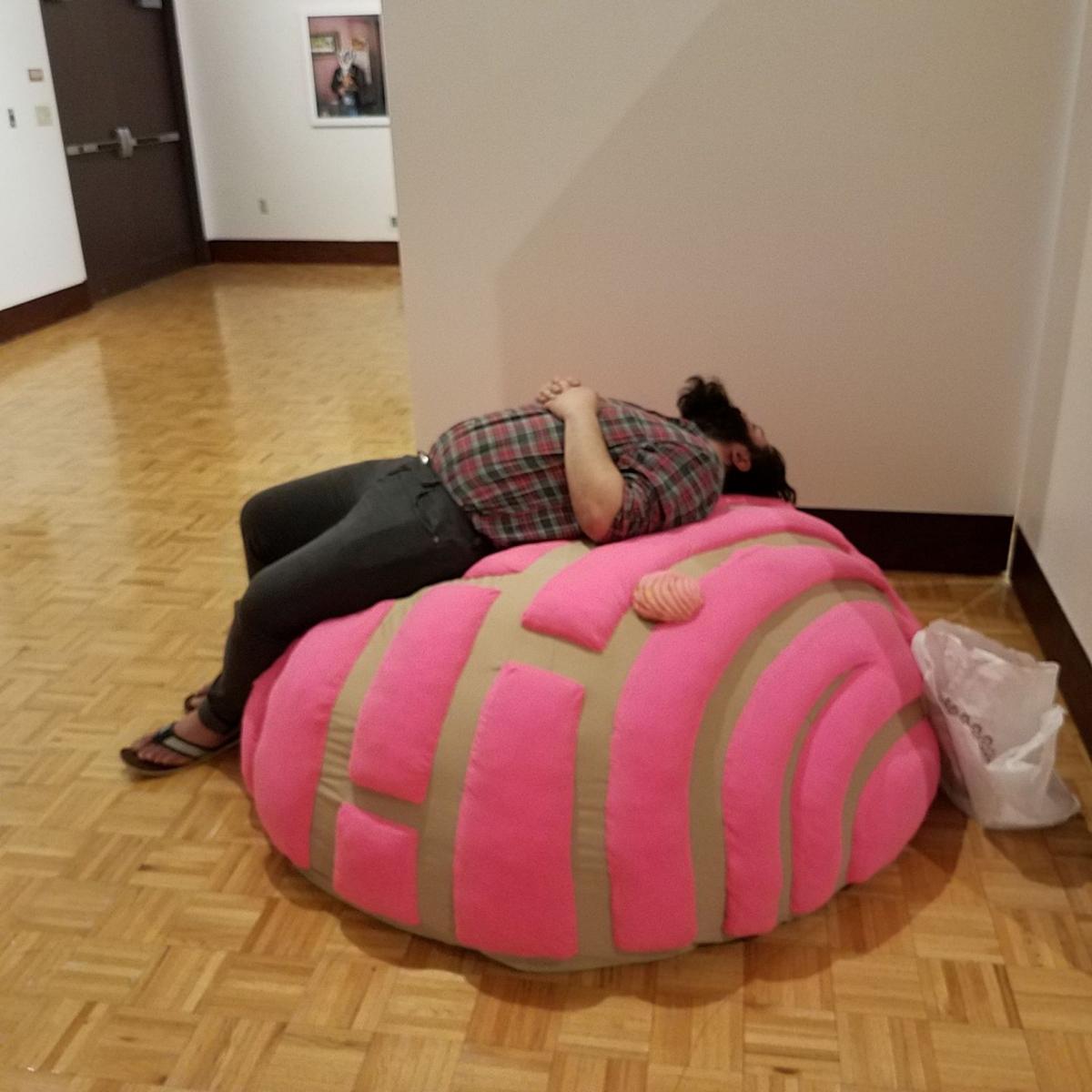 He curated An International Art Show, a day-long exhibition that opened on January 27, 2017, the day Trump unveiled the executive order prohibiting immigration from sevin predominantly Muslim countries from entering the U.S. (The order has since been raised to six countries)

Del Real also curated Herencia: Latin American Influence in Art at the Christel DeHaan Fine Arts Center at the University of Indianapolis. The group show features painting, photography, and installations from 13 Latinx artists from across Indianapolis — and from farther afield.

A giant installation resembling a cake confronts you as you enter Herencia. This is “Really Safe in America,” the work of Chicago-based artist Yvette Mayorga. In fact, it is decorated with cake frosting. But the frosting spells out a Trump sentiment. It reads “Go Back Home, Illegals!!”

“That’s the confrontational side of the United States,” said Del Real.

On the other side of the installation is her video “Really Safe in my room in America.”

“Her video confronts you with all of these different things that have to do with Mexican culture and all the things that immigrants run from,” added Del Real.

This video intercuts scenes of celebration and home life in a Latina household intercut with grisly images of corpses — casualties of the drug wars in Mexico.

Del Real, 33, who was born in Tijuana, Mexico, has several pieces in the exhibition. One is a mixed media sculpture depicting an oversized Mexican concha (seashell) pastry the size and shape of a bean bag. It also functions as a bean bag.

“The concha is the most popular pastry at a Mexican panadería [bakery shop],” he said. “The title of this is “No Seas Concha.” Which is an expression in Mexico that means don’t be lazy.”

On February 20, the day of the reception, performance artist Jonathan Angulo laid on top of “No Seas Concha” pretending to be asleep.

“This particular performance is about tackling that stupid stereotype that Mexicans are lazy moochers,” said Del Real.

A painting entitled "El Perdón" by Mexican artist Antonio Triana Cardoza is one of the standouts. The depicted creature looks like a hybrid between an Aztec God and an A.I. robot.

“He’s actually a tattoo artist and a muralist,” said Del Real. “He does well in micro scale and really large scale. He’s done murals all over the world. He just paints on buildings and it’s always this iconic, illustrative, indigenous inspired style.”

Del Real has something of an inspired touch when it comes to putting together shows. He was a member of NOPAL Cultural, a Latino arts organization that began hosting a Day of the Dead Celebration four years ago, collaborating with the Eiteljorg, used as a venue.

But for An International Art Show — which took place at the International Marketplace (IMC) headquarters at Lafayette Square Mall — as well as with Herencia, Del Real worked as an an independent curator. Herencia, however, came about because he is an alumnus of the University of Indianapolis.

“I have a really strong connection with the campus, particularly with the art department,” explained Del Real. In the art world I’m sort of their example of as one of their alumnus who’s doing stuff in the art world. That’s how they’ve known about me over the years. They decided to contact me about a year and a half ago to organize a Latin American exhibition for them.”