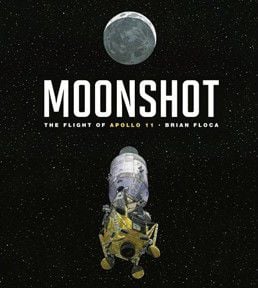 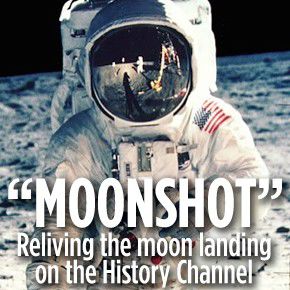 The Eagle lands again, but this time it's in a docudrama timed to coincide with the 40th anniversary of the day Apollo 11 touched down on the moon.

Moonshot gives us another opportunity to relive the joy, fear and challenge of what might have been America's proudest moment. And it does so enjoyably while sticking close to the facts. Yet you wonder why the producers felt the need to dramatize events that clearly require no embellishment.

The best moments in the film, in fact, are the ones that use actual footage. The look of pure joy on legendary CBS anchorman Walter Cronkite's face when the spacecraft landed safely is worth two hours of your time by itself. Then there's President Nixon's phone call to the astronauts on the moon.

"Because of what you have done," Nixon told them, "the heavens have become a part of man's world. And as you talk to us from the Sea of Tranquility, it inspires us to redouble our efforts to bring peace and tranquility to earth. For one priceless moment, in the whole history of man, all the people on this earth are truly one."

No one remembers Nixon as poetic, or even sentimental, but that was exquisite.

The first hour-plus of Moonshot covers the back story: President Kennedy's exhortation to land a man on the moon by the end of the decade, a quick history of the space program, bringing the team together, the maneuvering to decide which astronaut got to set foot on the moon first, the nervous moments before and during the flight.

But it's the last 30 minutes or so, which intersperse real footage with the dramatic, that make Moonshot worth watching.

The actors who play the three astronauts -- Daniel Lapaine as stoic Neil Armstrong, James Marsters as the mercurial Buzz Aldrin and Andrew Lincoln as the easy-going Michael Collins -- handle the roles easily. For Marsters and Lapaine, their finest scene comes when they're standing on the surface of the moon. Each expresses the awe, both in words ("Magnificent desolation," Aldrin says) and in their eyes, that the real astronauts must have felt.

There will be documentaries about the moon landing airing Monday on several channels, and that's the best way to present this story. But even those who don't need fiction mixed in with their facts will enjoy Moonshot.