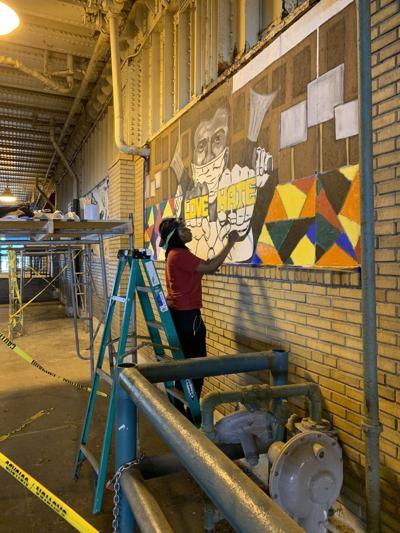 The image of a large figure with glistening gold rings that read “Love” and “Hate” greeted me as I arrived at the Union Station building on 350 South Meridian on the afternoon of June 11. The mural was the in-progress work of Boxx the Artist, one of many being produced by artists in collaboration with support from the Arts Council of Indianapolis, St’ArtUp 317 and PATTERN magazine.

For Boxx, an Indianapolis artist who paints full time, the opportunity seemed to fit perfectly with her previous work and artistic goals. “I like to express through my artistry Black bodies, Black faces, Black women, Black children, Black men, put it in an area as to where it's viewed as fine art,” she said.

Boxx often uses her work to change narratives, both artistically and culturally. The mural project has given her a new platform to do so, specifically during a time in which she finds herself reflecting on how she can best leverage her talents in support of the historic movements currently taking place across the world.

“It’s everywhere, all over social media. You can’t filter the content, it’s raw and real,” Boxx said, referring to the global presence and traction the Black Lives Matter movement has gained. Boxx is no stranger to political advocacy, marching and protesting many times as a past president of the Black Student Union at Purdue University.  “I can’t go into the streets and protest anymore,” she said. “But I wanted and needed to be part of the movement, because once it starts moving, it needs to keep moving.”

Through her work, Boxx has found her artistic voice and talents just as essential as those marching for equity and justice. “Everybody’s not in legislation, everybody’s not in law. So they feel like they can’t figure out how to change things and move forward on a political level,” she said. “People can still play their role. You have the protestors, the activists in the streets. And you have the artists who can literally show it, show a different perspective and shine light on an area that not all people may be seeing. This is news, news that people need to see.”

Boxx believes artists are activists in their own right, drawing attention to radical issues and helping course-correct the trajectory of society with their creative talents.  She points to filmmaker Spike Lee as an example of this, who’s 1989 film, Do the Right Thing, serves as a point of inspiration for her mural. “In that film, that was the first time where we see interactions with black men and law enforcement. In that movie he was killed by the cops, in public, broad daylight,” she said. While acknowledging the harsh realities of the Black community that the film focuses on, Boxx also points to the messages of hope presented by Lee, saying, “The character wears two rings, love and hate. He gives a synopsis of love conquers hate. Love always prevails. Love conquers all.”

Redirecting the energy from traumatic circumstances back into love is a core theme in Boxx’s work, and one her mural proves very successful in doing. “With this piece I’m able to address both the positivity and the traumas,” she says. “In the midst of the hurt, in the midst of the trauma we face in the Black community, be mindful to take care of yourselves, love on yourself, and speak positive things into your life.”

Taking a collective breath together: the art of Nasreen Khan

Khan has been working in art and poetry since moving to the United States for college, a practice she found as a way for her to connect with the immigrant experience, highlighting and referencing the places she comes from.

Kyle Herrington is an artist and curator who has worked in the Indianapolis arts community for over 14 years. He is especially passionate in sharing the perspectives of emerging artists other marginalized and underrepresented voices through his work.