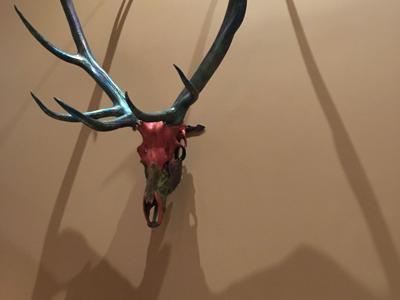 The Ancient Urushi tradition of lacquerware gains a lyrical visual makeover through art created by Nhat Tran. Transcending the utilitarian serving and storage dishes, for the past two decades Nhat Tran has been festooning walls with a process all her own, meticulously layering the specially culled milky sap from trees native to Asia, onto a wooden or clay board, and burnishing each dried application to tease out colors, textures and narratives from the added pigments. Each is unique, and each takes on its own life as a work of art.

The twelve new works on exhibit Nov. 15, at a private home, are dancerly, with a feeling of greater emotional depth than Tran's previous quiet subtleness. There is a prominent emerging from a place beyond, whereas earlier works always took me into them, following a path to an unknown mystery. Instead, these new pieces seem to be coming towards me, inviting an embrace. The colors are more daring, the activity more vibrant. Hopefulness, so very much needed at this moment, pushes the narrative. A young child who accompanied her mother to the show mirrored exactly how and why this new set of works touched me. This child was her own self in her choice of clothing, layering fabrics of contrasting design and color into a whirl of activity, and yet a shyness, a decorum, surrounded the boldness. I could feel her communion with what was on the walls. Observing this, I could say to Nhat Tran, you are into the emerging generation of art patrons. You need to reach out to a younger audience.

I think this emergent sensibility started with Tran's foray into multidimensional work, particularly her antler-based sculpture, prominent in her 2018 show at the JCC.

In conjunction with this leap into a new fabric, The Hubei Museum of Art invited Tran to participate in the 2019 Hubei International Triennial of Lacquer Art, titled World of Lacquer: Vessel & Form. The curators selected "Dancing in the Moonlight," about which Tran wrote:

"Dancing with a partner is learning how to enmesh ensouled bodies to become one configuration, one form whose moves transform a single space. Look at me: I am two, and yet one. Look at our shadow: it, too, is one. Move the moon: our shadow will move, and so do we, gracefully, in perfect harmony. Will you come to the dance tonight ?"

The mounting and the lighting of the latter work were particularly engrossing, so I asked fellow journalist Jill Ditmire to capture an image to use in this NUVO column. She had a camera, and I did not. This led to a retrospective, me recalling covering Nhat's first public show in her workspace in 1999, and Ditmire remembering Nhat's "first show in downtown Indy-- at the CCIC in Wug Laku's place. I remember she told me no one would show her work, but Wag saw it, loved it, and said YES, let's have a show! He showcased her in that small gallery that was part of his "garage/work" space. I remember that night vividly. And her work and her. Wug was always a yes man, so gracious and open to all artists; he also deeply appreciated and supported independent business owners as much as he supported artists. We were all in the same game-- and all supported each other.

"I remember talking with Nhat about her journey and work on that night, and how she found those who did believe in her and support her, and she also sincerely appreciated and was faithful to those artists that took her in and helped her."

On the evening of Nov. 15, 2019, WFYI-public television aired Great Performances showing of "Red," capturing an episode in the life of Mark Rothko. It all seemed connected because for Nhat Tran, as for Rothko, her work demands to be embraced as part of the life of its purchaser. Rothko asks, "How can I apologize to my paintings" if he sells them, and they are hung where they are not studied, not alive within the life of their surroundings.

There's no separation between life and art, art and life. When I turned off the television, I hunted up Dan Grossman's "Remembering Wug Laku, the Pied Piper of the Circle City Industrial Complex," posted July 8, 2017, on NUVO's site.

Grossman wrote: "From 2007 to 2013 he ran wUG LAKU's Studio & gARAGE, a gallery that gave many Indy artists their first solo show. Not only that, but his work and his presence were crucial to developing a critical mass of art makers (and patrons) that have turned CCIC into a major arts center in Indianapolis."

To see and purchase art by Nhat Tran, go to: http://www.urushi-artist.com and

Wug Laku, who passed away last Thursday, is greatly missed by the Indianapolis arts community

The art and craft of Nhat Tran

The uppermost surface of Nhat Tran

’s lacquer paintings is the end. What’s there is a kind of cartographical data that evidences a lengthy journey.

Indianapolis-area artist, Nhat Tran, opens a new exhibit at Wabash College that includes both new works and a retrospective.