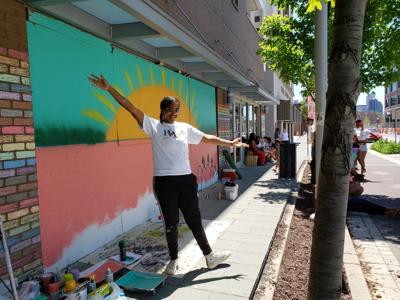 This is the first of an ongoing series on artists involved in this downtown project, organized by the Arts Council of Indianapolis and its partners. It was originally published on June 8 under the title "Downtown businesses and Black artists cooperate to beautify downtown storefronts".

The boarded-up windows of Homespun, at 869 Mass Ave, recently got a makeover in the form of a mural.

On June 7, as Shade Bell (pronounced Shad - aye) worked on her mural —  which depicts a sunrise and a congregation of people beneath — people in line for Gordon’s Milkshakes next door watched her work while children played on the sidewalk.

Bell is part of a group of artists turning plain plywood planks on downtown businesses into works of art.

She is part of a project sponsored by St’ArtUp 317, the Arts Council of Indianapolis, and PATTERN magazine, to bring local African American artists and business owners together. The Arts Council is providing $250 to $500 to each of the artists working on these murals.

These temporary murals will eventually be put on display along the Cultural Trail.

Regarding the subject of the mural, Bell said, “It’s just a congregation of Black people, their eyes are watching God.”  referencing a classic 1937 Harlem Renaissance novel by Zora Neale Hurston.

But the work is also a reaction to the police brutality and racial injustice protests that have taken place in the wake of the killing of George Floyd at the hands of Minneapolis police officers, she said.

“With everything going on in the world, and police brutality, it is making it very important for the Black Lives Matter movement to be seen and heard,” said Bell, who graduated Warren Central in 2014.  “I'm just a local artist and I want to do my part in regards to helping, assisting reassuring, comforting healing the whole situation."

There have been daily protests in Indianapolis since May 25, when Floyd was killed. These include protests on the night of May 30 and early morning May 31 which looters broke windows and/or looted dozens of downtown businesses. In response, many downtown business owners covered their storefronts with plywood.

Cafe Patachou management conceived of the plan to have Black muralists paint the plywood put up at 225 W. Washington St. after some windows were busted out during the riots, said Amanda Mauer-Taflinger, who is co-owner of Homespun along with her husband Neal.

Homespun was open during the mural painting: a sign hung on the door noting the requirement to wear a mask before entering due to the ongoing COVID-19 pandemic. The store specializes in handmade crafts.

The Taflingers, who had put up plywood as a precaution even though their business had not been damaged, wanted to do the same thing that Patachou was doing.

"I had originally offered to pay and then the Arts Council reached out to us and said 'We're putting this thing together with a bunch of artists' and so they took it from there and so they ended up taking over the payment," Mauer-Taflinger said.

And then the Arts Council set them up with Shade Bell.

Bell, who has had two solo shows locally is hopeful that this mural project might lead to more murals, more work. '

“I hope it does so you'll see a lot of my work over the city, which is going to be a super awesome thing," she said. "Hopefully, that encourages other people to be an advocate with their artwork to inspire children.”

Through her work, Boxx has found her artistic voice and talents just as essential as those marching for equity and justice.