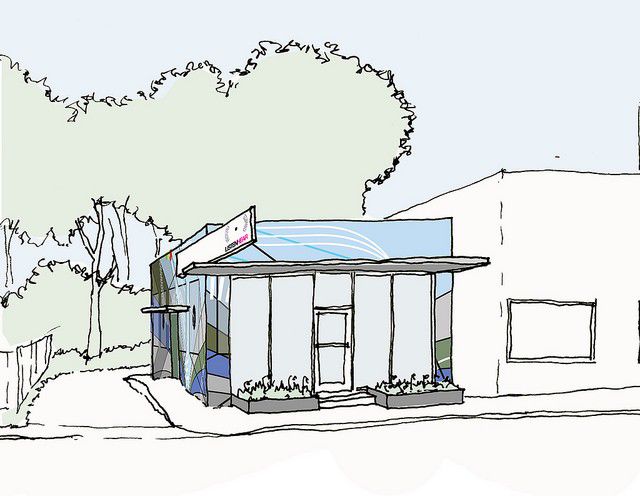 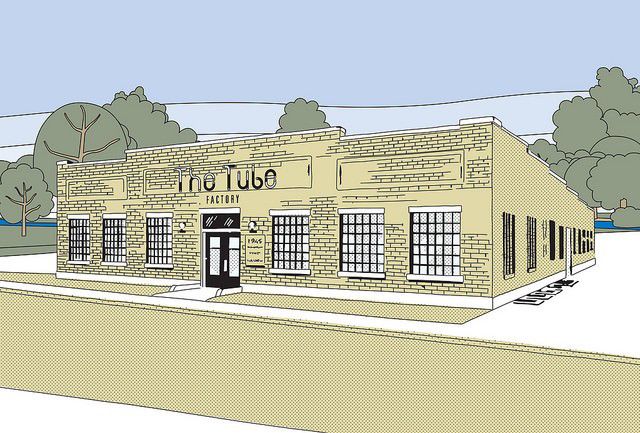 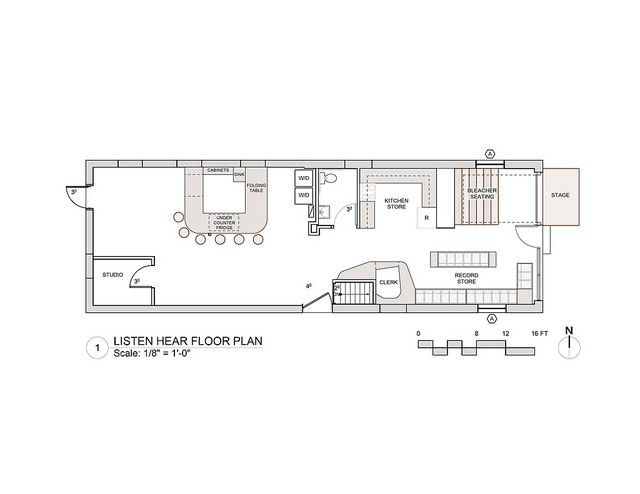 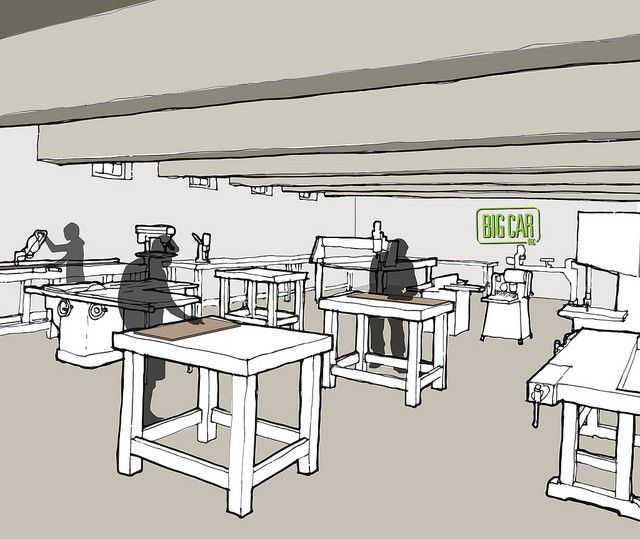 Workshop rendering of the lower level workshop, in the wood shop section 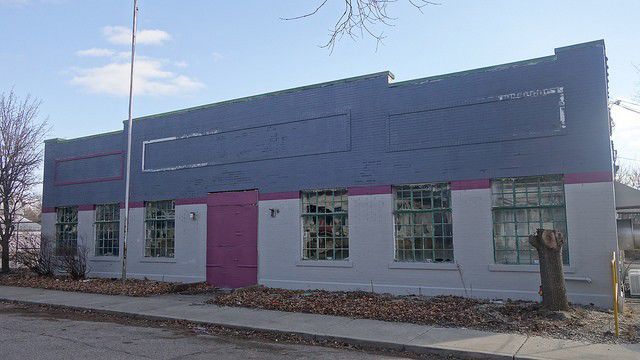 Tube front view as we found it 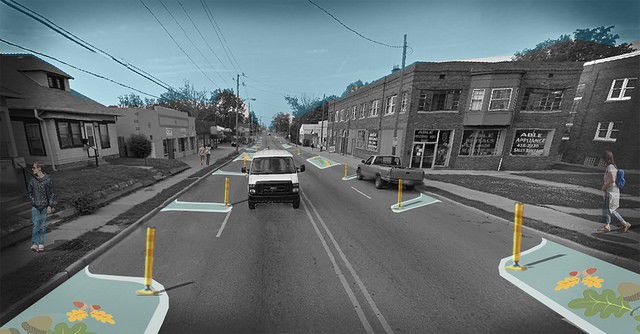 Workshop rendering of the lower level workshop, in the wood shop section

Tube front view as we found it

Neighbors just getting off of work step outside their homes, settle into the pendulum of a porch swing and catch up on the tide of daily events. The constant hum and zip of I-65 and four-lane Shelby Street overpowers any neighborhood noise on a small dead end street eddying off of Garfield Park. A large blue industrial building stretches down half a block next to small homes. The old factory sits abandoned — well, it did at one time.

Big Car has announced that they are taking on a $1.5 million project to change the face of the Cruft Street block, near Garfield Park. The city of Indianapolis awarded Big Car a $460,000 Community Development Block Grant to buy and renovate two key buildings on the street as community spaces, and a variety of local organizations (like the Lilly Endowment Inc., LISC and INHP) have donated significantly to help renovate. More than $600,000 has been raised so far. The whole point? "To make life better for people who live here," says Jim Walker, Big Car's executive director and founder.

It's a simple idea, but hardly small.

What it will become

Two buildings will become the focal point of the endeavor. Built in the 1930s "The Tube," is an old industrial space that will become the flagship of Big Car. On the west side of Shelby Street lies the second building, a permanent version of the sound art pop-up shop that currently lived in the Lafayette Square/International Marketplace area, only this round will add community programing and a curated record store. The location was chosen because it is the halfway point between University of Indianapolis and Fountain Square and lies on what will become a rapid transit stop in the coming years.

In typical Big Car style, nothing about these spaces will be bare-bones. If you don't know what Big Car is, pause and read a few background stories. But for a tweet-sized summary, they are a group of artists, and just generally innovative people, who use creative placemaking to build up communities.

Get to Know Big Car from Big Car on Vimeo.

Previously, Big Car was housed in Lafayette Square where the deal was this: In exchange for lower rent they would fill a building that had been sitting empty and work on it. Once the owner wanted to lease it to someone else, they would be gone in two months, having left it better than when they moved in. That notice came, and Big Car saw the need for a permanent space and an opportunity.

Jim Walker is calling the first building in their Garfield Park project "The Tube" as homage to its previous use by Tube Processing facility. The 12,000-square-foot space that was also once a dairy processing plant (evident from thick linings of cork that pack the basement ceiling) will house Big Car's new headquarters, community programing, wood and metal shops, a darkroom, screen-printing and a tinkering lab for hands-on learning. The space will also be used for art installations and just about anything they need. A home base shop that doubles as a point of contact with the community is a win-win.

The second building, called "Listen Hear," sits at the nearby intersection of Cruft and Shelby streets. Walker describes it as a space for sound art, and will include a record store, seating, room for single-person shows, a small kitchen for chefs to cook meals and a home for Big Car's soon-to-launch low-power FM community radio station. Neighbors in the area have told Big Car that they want somewhere to do laundry and walkable retail space. At one time there used to be over 30 active businesses on the street. Today, retail space is desperately needed.

The president of the Garfield Neighbors Neighborhood Association, Jim Simmons, recalls 45 years ago when almost anything you needed was in walking distance. "It's been replaced by concrete asphalt and chains," says Simmons. "The local business labor has pretty much disappeared. We are trying to bring that back."

Big Car hopes to help kickstart that change. The process that they are using is often refereed to as "creative placemaking," in short, it's transforming the physical elements of a neighborhood to unleash social innovation. It will bring the tools to make art and let the buildings become a canvas. Hopefully, it will not only serve itself but organically feed into every area of life around it.

There is a certain mentality to "The Tube" and nearly everyone connected with it — as you create, bring people up with you. For Brent Lehker, Big Car's staff artist and builder, it's the difference between what his art was (installations and pieces that were centered on his individual story) and what it's becoming.

Having new retail and artist spaces are undoubtedly a positive thing for any neighborhood, but Big Car is pushing the roots even deeper. In addition to the two buildings, they bought three houses along Cruft Street for artists in residence. One will house rotating artists, the other two will be for permanent ones.

"The key will be being open to the community," says Walker, discussing what kind of artist will end up living there. "If you're a musician, or you're a writer, or culinary artist, or you're a visual artist and you like the idea of interacting with people, collaborating and connecting — that's what we really want this to be. Kind of a communal situation." For Walker it's an attitude of not wanting to be hidden away.

For Lehker, who has been working to bring "The Tube" to life, having a large scale shop for artists and neighbors to use goes hand in hand with his own work as an artist.

"This is artwork to me," he says. "The whole [building] is a big art piece to me. I will have my own shop now; it will be the community shop." Lekher's background is in furniture making, with a degree from Herron School of Art and Design.

Seeing the community as art in itself was not always so innate for Lehker. He remembers the first time something he made took on a life outside of himself. During Art in Odd Places his city market installation required him to ask passersby questions, they would mark their answers by dipping sticks into paint: Certain levels signified a particular response. He used each one in the work.

"Here is an art piece I could have just made by myself, but I got to include 250 people," says Lehker. "That's kind of what this [The Tube] is to me. I'm pulling in people."

Bringing people into the space will only work if they want to. Big Car seems void of the let-me-come-tell-you-what-you-need-instead-of-asking-first approach.

"You can't do things for people, or be the one who is saving them or whatever, but you can do things with people," says Walker. He lives in the neighborhood himself.

According to Simmons, he hasn't encountered a single neighbor with a negative reaction to the project. He also noted that there are at least five artists and a handful of woodworkers that live in the area that he knows of. The neighborhood association that he heads just recently expanded their territory to include the blocks east of Shelby Street. The expansion is intended to bridge a very visible gap.

It's well known that one block in any direction can make all of the difference in Indianapolis. The divide of one street can mean thousands of dollars in home values, average incomes and the privilege of a population. Shelby Street, bordering Garfield park, is no exception. According to data released by Big Car, forty-two percent of houses in the area have incomes that don't even brush $25,000, and 13.5 percent live on less than $10,000 a year.

Just to break down some cycle-of-poverty basics, the low income results in 22 percent of adults over age 25 having no high school diploma and 81 percent with no college degree. Without eduction or opportunity, the cycle continues. Most of the homes near "The Tube" are walled by boarded up windows and crumbling cement, 20 percent of those homes are sitting empty right now.

"There's really no mystery as to why it is that houses are empty over there but they aren't over here," says Walker. "It's only one thing, this road [Shelby Street]."

He added in a press release that "we really want to show people on both sides of Shelby Street in Garfield Park that they count and they deserve a great neighborhood."

The road, like so many in Indy, draws a stark line between classes. It walls off who has convenient access to the park and who doesn't. Part of Big Car's plan is to work with the city to narrow Shelby Street to a two-lane road instead of four, making it more manageable for bikes and pedestrians. Things like few crosswalks make it hard for anyone on the east side of Shelby Street to access the park that is only feet away. Small elements of urban design can act as a relief cut for an area that is quietly buckling.

While the two spaces that Big Car has are entirely unique, it's hardly the first time that industrial blight has been redeveloped in the hopes of revitalizing a neighborhood. Big Car's Urban Design and Research fellow, Nicole Rebeck, noted a few that she came across back when she was writing her thesis — the Steele Yard in Providence, Rhode Island and Wychwood Barns in Toronto, Ontario. Both sites were once near industrial ruin and were reshaped into what became a catalysts of creativity. This kind of urban narrative is what fuels Rebeck.

"It's kind of beautiful," she says looking up at the rough gray wall outside "The Tube." "The way this space existed was a burden on the community [before Big Car]. It was abandoned, dilapidated, unkept. What Big Car is doing is infusing it with creative people and ideas, and productive spaces. It's kind of magical to think about that. ... It's like urban acupuncture. They picked this spot here to do work. That has ripple effects through the community."