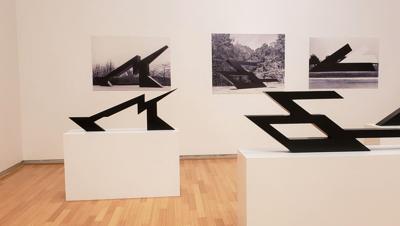 A few days ago, I went to see the sculpture of Ronald Bladen at the galleries at the Herron School of Art & Design, in an exhibition titled Angle / Edge / Plane just as the impeachment trial of Donald Trump was getting into gear. Many of the painted wood sculptures on display served as maquettes for much larger public sculptures depicted in the exhibition by black and white photographs.

WHAT // Angle / Edge / Plane : The Sculpture of Ronald Bladen

Bladen, who was born in Vancouver, Canada in 1918, learned many of the practical skills he would put to use as a sculptor in the navy shipyards in San Francisco during World War II.

Two exhibitions solidified his reputation; a survey of younger British and American sculptors at the Jewish Museum in New York in 1966, and a solo exhibit in Washington D.C at the Corcoran Gallery in Washington the following year.

While Bladen’s work seems to fit neatly enough into the genre of minimal sculpture, there are whimsical touches to his sculptures. Consider “Black Lightning” — which resembles a lightning strike in its shape — and “Kama Sutra.” The latter sculpture has dual elements that you might imagine are making love to one another.

Bladen, in fact, makes me think of Roy Lichtenstein more than of Richard Serra, the minimalist sculptor influenced by his (Bladen’s) work. Take a walk through the monumental “Five Brushstrokes” sculpture garden outside the Indianapolis Museum of Art at Newfields and you’ll see what I mean.

No sooner did his “Tilted Arc” go up in New York City’s Federal Plaza than the naysayers called for it to be removed. Unlike much of Bladen’s sculptural output, there was nothing whimsical about the 120-feet-long, curving, blank-facing edifice of Cor-ten steel that greeted federal workers every morning on the way to work. Eventually it was removed, but it had its impact.

If you believe the art critic Robert Hughes, this work served as something of a template for Maya Lin’s minimalist design for the Vietnam Veterans Memorial in Washington D.C. Her proposal — for two 246-foot walls of black granite inscribed with names of the war dead — beat out 1,400 competitors in the design competition for the memorial, which took place in 1981. The design had earned the 21-year-old a B in a funerary architecture class at Yale, where she was a senior.

The controversy surrounding the Memorial dwarfed that over “Tilted Arc”. The design’s complete break with the classical tradition and Lin’s Chinese background became fodder for the proposed memorial’s opponents, who included Vietnam veterans as well as journalists.

The most prominent voice in this camp was Tom Wolfe, the father of the so-called New Journalism. Wolfe described Lin’s design as “a tribute to Jane Fonda” selected by cultural elites — “mullahs” he called them — who didn’t care about the Vietnam veterans for whom the memorial would be built.

And what did these “mullahs” care about? Modernism, according to Wolfe: “The look of modernism is familiar to anyone with the slightest interest in contemporary art: the abstract sculpture, the two-dimensional and usually abstract paintings, the so called glass-box buildings,” he wrote. “At the major universities such as Harvard, modernism was regarded not as a style but as the millennium. The result was a Savonarola — or Red Guard-style cultural revolution.”

Perhaps Wolfe was hoping to inspire a counterrevolution with his book The Painted Word. Published in 1974, the book offered a jaundiced history of modern art, from Cubism through Abstract Expressionism and beyond. His book contained takedowns of Jackson Pollock, Frank Stella and Andy Warhol, among others — basically anyone who deviated from realism of, say, Jean François Millet. Wolfe, the father of the so-called New Journalism, was an unabashed proponent of realism both in literature and visual art.

But over and above the artists, his deepest contempt was reserved for what he called “Cultureburg”, that is, the mid-20th century Jewish critics (three whose last names ended in berg) who enthusiastically wrote about modern art. To Wolfe, the New York art scene at mid-century was a con. According to Wolfe, these artists weren’t that interested in producing actual critiques of art. The art served, rather, to illustrate the theories of the critics. As the 20th century went on, artists became more and more dependent on the words of critics for exposure until, at last, conceptual art was born:  “And there at last it was! No more realism, no more representational objects, no more lines, colors, forms. … Art made its final flight, climbed higher and higher in an ever-decreasing tighter-turning spiral until, with one last erg of freedom, one last dendritic synapse, it disappeared up its own fundamental aperture … and came out the other side as Art Theory!”

There’s a whiff of anti-Semitism to some of Wolfe’s writing. You can see even more ugliness seep to the surface when he described the modernist “cultural revolution” while simultaneously poking his nose at what he described as the effete cafe intellectual culture that made the selection of Lin’s design possible. He saw (or imagined) this left-wing snobbery everywhere, but particularly in New York City, while positioning himself as a man of the people.

I recall seeing this man of the people walking across the Johns Hopkins University campus in the Spring of 1990, on the way to deliver some speech or other. (I was an undergraduate then, in my senior year.) Wolfe was dressed in a bright white suit designed to set him apart from everyone around him. Shortly before his death, in 2018, Wolfe had some flattering words for Donald Trump.

The people, however, were not with Tom Wolfe when it came to the Vietnam Veterans Memorial. Since it opened on Nov. 11, 1982, it has attracted some three million people a year. In the mirror-like surface of the polished black granite, where the names of 58,320 fallen are inscribed, the living can see their faces enveloping the dead. Wall text and art became one. It’s hard to find a disparaging word written about the monument since Wolfe published “Art Disputes War: The Battle of the Vietnam Memorial” in The Washington Post in October, 1982.

There is, of course, a place for negative reviews in art criticism. If you go to a lot of galleries that show contemporary art, you are bound to perceive discrepancies between the art and the word from time to time. I, for one, could do without seeing another exhibition featuring a pair of semen-stained briefs or the didactics purporting to explain it.

But such discrepancies don’t give me cause to dismiss entire art movements and their practitioners.

I’ve seen engaging contemporary art in all degrees of abstraction right here in Indianapolis. I don’t think it’s true, per Wolfe, that only cafe intellectuals understand (or pretend to understand) non-representational painting and sculpture. In trying to position himself as a partisan of the common man, Wolfe ventured into absurdity, leaving reality behind. It would be easy enough to refute Wolfe's notions. It wouldn’t be hard to find Trump supporters, for example, who appreciate Anish Kapoor’s Cloud Gate in Chicago’s Millennium Park.

All of this art history came to mind — my mind has a tendency to wander — as I toured the Ronald Bladen exhibit. Not that the didactics in the wall text in the Herron Gallery didn’t do their work well. I had no complaints. But my mind kept wandering. I thought again of the ongoing impeachment hearings.

I imagined myself putting on an exhibition where the didactic wall text and the art were reversed. I imagined an enormous exhibition space where the frames contained the text of Trump’s 16,000 lies since his inauguration and where Fox News broadcasts take the place of the didactic wall text, where the lies are explained away by the Fox talking heads. Why not? Let’s face it: Trump is a Michelangelo — not in the art of the deal — but in the art of the lie.

I would call this exhibit Trump: The Painted Tweet.'

A Walk through Conner Green's 'Imperia'

An Interview with the 60 Wrd/Min Art Critic

Adult Swim at the Children's Museum

A trip to Kathryn Armstrong’s Worth Remembering at iMOCA

Grossman: Of Snobbery and Public Sculpture in Carmel

By reworking traditional art forms, these artists have created bodies of work that are edgy and thought-provoking.