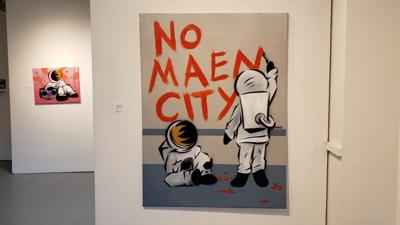 This is the fifth part in a seven part series about the artists of Indianapolis and the gallery spaces that serve them and the community. At the conclusion of this series I will revisit the arts scene as it is now, in the wake of the pandemic’s first wave —  and in the middle of nationwide racial injustice protests that have also taken place in Indy —  to explore the way forward.

Indianapolis is not a city of high-end contemporary art collectors. For that reason the Harrison Center, which is not uniformly high end — at least in terms of price points —  is a good place to get a sense of what kind of art is being made, and sold, in the city. With its 32 artists’ studios and with its five art exhibits opening simultaneously, a Harrison Center First Friday opening always feels like the artistic equivalent of a Barnum & Bailey style multi-ring circus.

A band called Naptown Stomp was playing in the gymnasium and couples were swing dancing when I walked in. A local restaurant was serving soup in the main gallery and there was a long queue of people waiting patiently for it. Per usual, I found a mix of work by emerging and professional artists hanging on the walls. (Like other arts nonprofits in Indy, the Harrison Center has also engaged in outside-the-walls community-building activities.)

The nonprofit arts center occupies the grounds of a former church. In 1903, the First Presbyterian Congregation built its fourth home on the near northside property. (The 23rd president, Benjamin Harrison, was an elder and Sunday School teacher at the church.)

In 2000, philanthropist Jeremy Efroymson purchased the 70,000 square foot church campus which would become the Harrison Center for the Arts. He purchased the building at a time when there was a lack of art studio space in Indianapolis and he wanted to repair that situation. But first he had to repair an 8-foot hole in the church sanctuary ceiling.

Efroymson continues to support various arts initiatives in Indianapolis. The Samos Alpha exhibition in the Harrison’s Speck Gallery is the result of one such initiative. The six Harrison Center artists who created work for this show attended an inaugural artist residency in Samos, Greece in the fall of 2019, with their travel expenses paid by Efroymson and the Harrison Center. It was led by Christos Koutsouras, an Indianapolis-based artist who was born on Samos.

The artists drew inspiration from the island to create the exhibit. But it wasn’t just the ancient historical sites that attracted their attention. They learned about the plight of refugees housed in camps on the island and viewed hillsides ravaged by recent fires.

As if to lighten the mood, a solo show titled Happy Go Lucky was on display in the Harrison’s basement. One of the canvases, in spray-paint and acrylic, depicted an astronaut spray-painting the logo “NO MAEM CITY” on a wall. The logo is an historical reference. That is, Benjamin Harrison used the phrase “No mean city” in a speech, three years after he left the White House, to describe the Hoosier capital. Harrison’s ghost might have been haunting the halls of the Harrison Center, for all I knew, but Happy Go Lucky artist Joy Hernandez was elsewhere that evening. I would meet up with her later.'