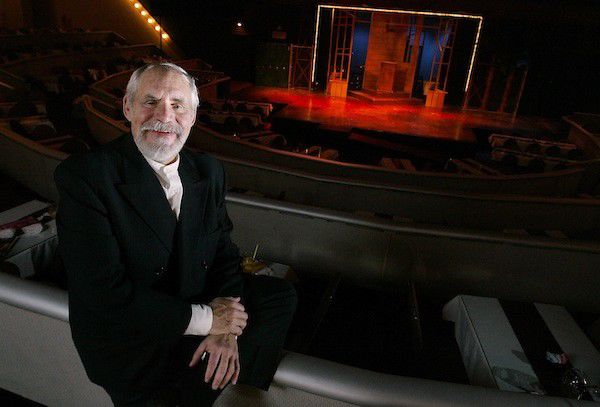 Douglas Stark has owned and operated Beef & Boards since 1980. 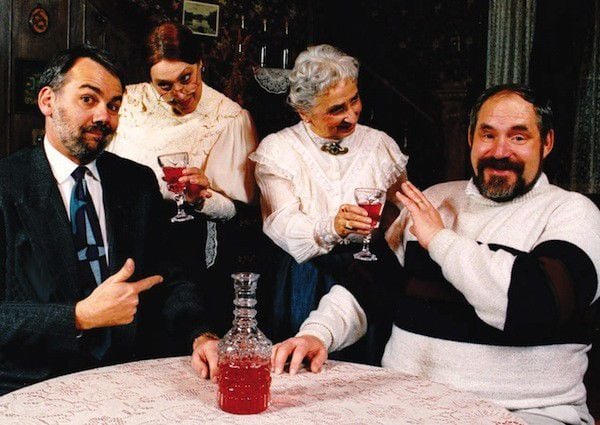 Bob Zehr (left) and Doug Stark, who bought Beef & Boards in 1980, turn down the offer of fortified wine from the murderous aunts in Arsenic and Old Lace in a staged photo taken during the show's 1993 run.

Douglas Stark has owned and operated Beef & Boards since 1980.

Bob Zehr (left) and Doug Stark, who bought Beef & Boards in 1980, turn down the offer of fortified wine from the murderous aunts in Arsenic and Old Lace in a staged photo taken during the show's 1993 run.

When Louisville entrepreneur J. Scott Talbott opened an Indianapolis outpost of his Beef & Boards chain in 1973, it became one of the country's 120-some Equity houses offering dinner and a live show year-round.

Today, only seven Equity dinner theaters remain in these 50 states, and Beef & Boards, celebrating its 40th anniversary this year, is the the sole survivor from Talbott's chain.

Douglas Stark and Bob Zehr have had a hand in the theatre for many of those years. Having met as a students at Ball State, they together operated a theater in Syracuse, Ind., the Enchanted Hills Playhouse, from 1973 to 1980, then purchased Beef & Boards in 1980.

That first season opened with Oklahoma! in November, then followed a template that remains to this day: a season's worth of musicals interrupted by a single, annual play on the calendar after the Christmas show, "so that the orchestra can have time with their families," according to Stark.

Zehr left Beef & Boards in 1998, and Stark has been at the helm since, continuing to perform, direct and oversee daily operations. Stark's children are equally involved: Nick serves as house manager and maintains the building, Elizabeth is company manager and Josh appears on stage and assists in building maintenance.

NUVO: What prompted you to purchase Beef & Boards?

Douglas Stark: At the time it offered the most stability that I could have as an actor and director to fulfill my artistic need - and at the same time provide the stability that's necessary for raising a family.

NUVO: Why the gutsy move to this location?

Stark: That was decided by J. Scott Talbott, who originally was involved with the I-465 expansion when it went into effect in 1973. When it first went in, the Pyramids had just been completed, there was a small Smuggler's Inn on the site where the Texas Roadhouse is now and Beef & Boards was sitting up on the hill. So the first thing you saw when you came off of I-465 was a cornfield and this little building rising above it.

NUVO: What models did you use?

Stark: We started with the musical format because it's what we found worked the best at Enchanted Hills Playhouse, where I was the artistic director for seven years before entering the dinner theatre business. It's what the audience wants. It's like the old song from Ain't Misbehavin': "Find out what they like and how they like it and give it to them just that way'."

NUVO: How have you balanced building a local professional acting community and bringing in regional and national actors?

Stark: It's basically the same. My ratios remain the same. If we have an excellent local actor who fits the role, we'll go there first. But that doesn't preclude us from bringing in somebody from New York or Chicago or St. Louis.

NUVO: How do your directors, designers and actors shape a show to greater significance because of the space's intimacy?

NUVO: What significant changes have happened over the years? What's stayed the same?

NUVO: How has Doug Stark changed and grown over 40 years?

Stark: Instead of putting clown white in my beard, I now have to use Just For Men.

NUVO: What is your personal spectacular moment?

Stark: It would have to be Tevye in Fiddler on the Roof - it's a show that is so meaningful on so many different levels. Again, we take a big production and make it about a family.

NUVO: Was there ever a time when you wondered, "Why did I do this?"

Stark: Almost on a daily basis; I'm always wondering why I am doing it!