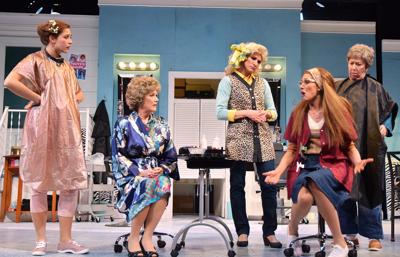 Beef & Boards transforms its stage into an at-home beauty salon set in fictional Chinquapin, Louisiana, during 1986-1988. While the hairstyles and styling techniques, along with a swatch of dialogue references, are caught in that 30-years-ago timeframe, the dynamics of the relationships between the women who gather for their weekly ‘do’ are universal across time and place. Playwright Robert Harling gifts us with a small-town ethic within which we might find ourselves; a mother-daughter relationship, a young woman, trying to reinvent herself, friendships fraught with contention; a hideaway where, yes—you can let your hair down—akin to what happens at men’s only barbershops. The most daring topic, however, is bringing into the open diabetes, kidney disease, dialysis, kidney transplant, and their health contingencies. While we still don’t know too much more about what causes diabetes since the play, and various film and television versions surfaced, Steel Magnolias has earned its place in the pantheon of stage and film drama that makes it o.k. to speak openly about disease. Shame need not be attached to a physical condition. And, it’s a boon to pharmacists, whose mantra is, “take your meds as prescribed, please.”

Tom Williams’ review of the Chicago-based Hubris Productions run of “Steel Magnolias” encapsulates all of the positive aspects of why the play invites everyone to attend. “Steel Magnolias is a remarkable play in many ways,” cites Williams; “particularly because it has such a tender women’s point of view despite being written by a man. Steel Magnolias is part comedy of manners, part heartfelt tearjerker, featuring non-stop witty banter. Basically, a friendship comic drama, Steel Magnolias, tugs at the heart while making us laugh. It is much more than merely a “girl’s play.” [See: https://chicagocritic.com/steel-magnolias/  ]

Within the story of four women regularly meeting up at Truvy’s Salon, the play particularly revolves around the incidents when Shelby breezes into town—initially for her wedding, which sets up the reasons for the underlying tension between Shelby and her mother, and subsequently when the impact of her diabetes confronts her and us.

A corollary story surrounds the newcomer Annelle Dupuy—who might or might be married. At the reviewers’ invitation performance on January 4, the cast had not quite gelled into the kind of ensemble that makes this dialogue-driven play sparkle. It felt physically busy and lacked the punch of dynamic repartee the script requires. I expect the cast will find its groove and bring forward fully dimensional characters we’re supposed to love—foibles and all. Directed by James Hesselman, and making their Beef & Boards debuts are Diane Kondrat as M’Lynn Eatenton, Kay Francis as Oiser Boudreaux, Morgan Jackson as Annelle Dupuy, and Lari White as Shelby Eatenton. B&B veteran Suzanne Stark takes on the role of Claire Belcher. Deb Wims reprises Truvy Jones from a previous production of Steel Magnolias at Beef&Boards. Technical aspects are sterling.

New Stage Theatre in Chicago created a fine Student Guide for classroom use prior to and following attendance at a performance. You can find it at: http://newstagetheatre.com/manage/wp-content/uploads/Steel-Magnolias-sg.pdf