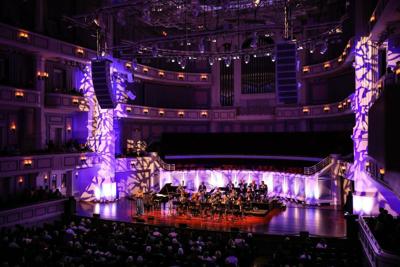 The strain of melody, the symbolism of "Stille Nacht... Silent Night" took me back, years ago with my family, into the ascent upward and into the simple structure, a lone guitar and the small choir swelling into "Heilige Nacht" as we all sang from the pit of our stomach to the uplift of soul, surrounded by a canopy of silky star-draped sky. Section-by-section, phrase-by-phrase the players on December 4, in the expanse of Carmel's confection of space, inhabited the awe from St. Nicholas Parish, in the small town of Oberndorf near Salzburg, Austria. In 1818, the church organ was unplayable. Never mind. Franz Xaver Gruber brought to life Joseph Mohr's newly minted lyrics of wonderment with the simplicity of his guitar accompaniment. Perhaps it was eschewing the pomposity from even a small organ; perhaps it was the circumstances of the preceding events in Europe, particularly the Napoleanic era; perhaps it was a miracle meant to happen then and again, even here on this night with fifteen players and two vocalists, sharing their awe to send us into the night and into the season ...' all is calm, all is bright...Glories stream from heaven afar, Heavenly hosts sing Alleluia!"

"Silent Night" was declared an intangible cultural heritage by UNESCO in 2011. Its story of transmittal from one humble Christmas Eve and Day is a tale of happenstance, traveling with troubadours who liked its tune and sentiment in any season. And so it came to us, in an arrangement of such swelling sentiment that the capacity audience momentarily sat in reverence before leaping to its feet. This is but the closing section of an evening of superb reiterations of beloved carols.

The Lincoln Center Jazz ensemble understands the power of music finding its dwelling place within us; they don't find it necessary to come at us, smack in the face - loud, discordant. The gift of trumpeter Wynton Marsalis as a leader rises from a depth of soul, shared through example. It's an ensemble. They share music rising us up.

And so we shared in communion a program of soulful, witty, big band versions of classics, including: "Jingle Bells," "Joy to the World," "Brazilian Sleigh Ride," "We Three Kings," "Who's That Knockin' at My Door," "All I Want for Christmas..."

Along with a magnificent setting of "Go, tell it on the mountain" by the players, Marsalis added commentary about The Fisk Jubilee Singers (gaining their name from Leviticus 25—the year of jubilee) as a ten-member touring ensemble to raise funds for the 5-year-old, debt-ridden Fisk University, in 1871, but equally bringing to national cognizance the significance of Negro Spirituals.

There was no printed program with names of players and listing of songs and the comments Marsalis provided with each song. The promotional catalog did mention the two vocalists, baritone Denzal Sinclaire and Alexis Morrast.

In 2007 Maya Angelou said of Wynton Marsalis' music, "It fits nicely on the ear." You can find this as the closing comment here: https://wyntonmarsalis.org/news/entry/wynton-and-maya-angelou-speak-about-music-deep-rivers-in-my-soul

Learn more about upcoming programs at: TheCenterPresents.org or call 317-441-2231

Wynton Marsalis is the managing and artistic director of Jazz at Lincoln Center and a world-renowned trumpeter and composer. He made his recording debut as a leader in 1982 and has since recorded more than 60 jazz and classical recordings, which have won him nine Grammy Awards. In 1983 he became the first and only artist to win both classical and jazz Grammys in the same year and repeated this feat in 1984.