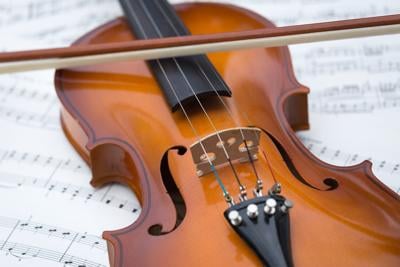 A year ago, I was reporting on the May 17, 9, 19, Indianapolis Chamber Orchestra program, “See the Music, Hear the Dance.” Its centerpiece, a laudatory rendition of Gershwin’s Rhapsody in Blue, pivoted on a collaboration between three organizations in residence on the campus of Butler University: Indianapolis Chamber Orchestra, American Pianists Association and Dance Kaleidoscope. In true reviewer form, the performers, directors, designers, received mention in my report. Left out, was the name of the person whose job it is to secure the financial backing to make such a program possible.

Elaine Eckhart, now retiring from her position as executive director of the Indianapolis Chamber Orchestra, has played a significant part throughout the ICO’s 36-year history. Founded in 1984, by David Urness, as The Musicians of the Cloister, with performances at Trinity Episcopal Church, its 1985 subscription season was played on the Indiana Repertory Theatre Main Stage. The name change came in 1987, when performances moved to the Indianapolis Museum of Art. Clowes Hall on the Butler campus became the ICO’s performance space with the 1988-89 season under Kirk Trevor, as music director and conductor. March 2015, Matthew Kraemer was named principal conductor and music director.  Concerts now are performed on the Butler University campus Schrott Center for the Arts.

nuvo.net: What brought you to the position you now hold?

Elaine Eckhart: Prior to becoming a part of the staff, I served on the ICO Board of Directors.  I remember my husband commenting that I treated that volunteer position as if it were a job! That is because I loved the work and what we were accomplishing in the community. Briefly in 1999 I served as Interim Executive Director for about six months because the person in that position was facing a major health issue. Much later, in 2006, the ICO asked me if I would be interested in coming to work for them again, as the position had come open.  I said yes, stepping in on an interim basis at first, and then on a permanent basis.

nuvo.net: What insights/intentions did you particularly bring to your leadership roles at Indianapolis Chamber Orchestra [ sometimes working in unison with other arts organizations in residence with Butler University]?

Elaine Eckhart: I witnessed the dedication and hard work of both of my predecessors in this job.  I had observed, even before I took the job that the organization was understaffed, so I went into the position with a vision to add a staff person to help spread the workload and free up my time to work on financial development/fundraising.  I also came to the position with a clear understanding of my job as an administrator not as an artist.  I have a great working relationship with Music Director Matthew Kraemer (and former Music Director Kirk Trevor) and we each respect the expertise and perspective the other brings to the organization. Finally, my management style is a “team” approach.  I have a small staff. Everyone is their own department, so to speak, and I try to respect the importance of each role.  This approach works with our collaborative partners, too.  Being a part of the Butler Arts Collaborative has certainly been a benefit to the ICO.

nuvo.net: What are the best moments--[whether known only to you and/or revealed to the public at large]

Elaine Eckhart: In 14 seasons, there have been so many wonderful musical moments that I know touched the hearts of the audience.  But two come to mind immediately:

I remember the absolute awe that came over the face of a young boy watching one of our children’s programs.  Afterward, our Principal Harpist, Wendy Muston, let him strum the strings of her harp and his face lit up.  We snapped a photo, and I re-visit that photo regularly.  The second is when we held our first Messiah Sing-Along.  The sound of the entire room, audience, and those on stage, singing the Hallelujah Chorus was overwhelmingly joyful.  I will never forget it. It stopped me in my tracks! (I stopped singing, so I could listen!)

I have been a mentor to over 20 interns as they work to prepare for a career in arts administration. It is exciting to work with that young vitality. I have tried to stay in touch with many of them as their careers develop.

nuvo.net: What makes the role of an arts administrator rewarding/challenging?

The rewarding part is carrying forward the mission.  Every time I hear the orchestra play, witness a rehearsal, see a patron talking with a guest artist, and hear the “buzz” in the lobby, I know that our product is great, our experience is great, and this is WHY we do what we do.  The challenges are in the day to day, including the fundraising.  I would be lying if I did not say there have been sleepless nights worrying over ticket sales and fundraising.  There are enormous amounts of planning, logistics and fundraising needed to deliver one short two-hour concert.  We serve a lot of constituencies: patrons, Board members, musicians, staff members, funders.  Communicating with everyone in a timely fashion and meeting all those needs can sometimes be challenging.

nuvo.net: What makes your organization essential to the vibrancy of greater Indianapolis, and beyond?

Elaine Eckhart: We deliver “ICO-Intimate Classic Original” concert experiences.  I know I am touting the brand, but let’s look at what that means.  There is an amazing body of musical literature spanning four centuries, including today, that is rarely heard. The genre is alive. The ICO takes pride perpetuating the genre by commissioning new works and performing works by living composers.  In fact, the ICO has received national recognition in the industry for the new works we play and promote. We bring that music to the community in the finest, most excellent way possible. The sound of a small orchestra is distinct, intimate, like a musical conversation.  For the musicians, it is challenging, because there is “no place to hide” in a small orchestra.  Each instrument voice is heard. Watching and listening is a special, intimate musical experience for the audience.

nuvo.net: What, when you take leave of this position, will you take with you for the continuation of a life of joyful service?

Elaine Eckhart: I regularly practice yoga and I plan to increase my work in that area.  I am taking coursework to become a certified yoga instructor so I can work with others, especially older adults, whose lives can be enhanced with diet and exercise.

Elaine Eckhart: Every time I attend a concert, I have a deep appreciation for what goes into it—whether music or dance or theater or opera. I will always appreciate the work it takes to launch any kind of professional production.  I have a deepened understanding of the phrase, “it takes a village.”  Quite simply, I could not have achieved anything on my own. All the success has happened with and through the support of others, --my staff, the musicians, artistic partners, funders, the Board, the patrons, and especially my family and friends.  I thank everyone.