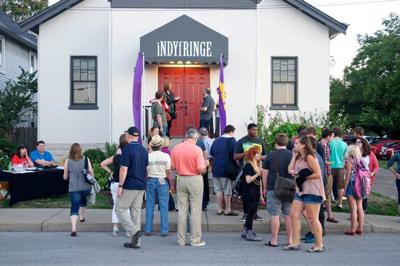 After being shut down since March because of COVID-19, IndyFringe Theatres will open October 1 - 11 with OnyxFest, a showcase of productions by African American playwrights. There is a contingency plan, according to OnyxFest director Vernon Williams, in case theaters are prevented from opening in the fall.

The plan is for WFYI public television to film these performances so they can be shared online.

“People will be able to see it online so either way it goes,” said Williams, who is also communications and community engagement strategist at IUPUI.

OnyxFest, the only theater festival in Indianapolis exclusively exhibiting the works of Black playwrights, is jointly presented by IndyFringe and the Africana Repertory Theatre of IUPUI (ARTI).

“ARTI is an organization that was actually launched last year to stretch the campus into the Black community for the purpose of articulating the experience of Black Americans through art and specifically through theater,” Williams said. “The bottom line is to help build a voice of the Black community and to articulate issues relevant to African Americans, through the arts as well, to encourage young people of all ages.”

The fact that ARTI is housed at IUPUI, the building of which razed the historical heart of the Indianapolis Black community, is not insignificant to Williams.

“The university has really taken a very aggressive and enthusiastic step towards trying to deal with those things then to build,” said Williams. “That's the collaboration that forged  the agreement between the campus and the Walker board that saw $15 million dollars in renovation go into that historic Madam CJ Walker theater. It's part and parcel of  the university's commitment to being community partners.”

The $15 million for renovation was provided by Lilly Endowment.

Being Black in America

The lineup of performances for OnyxFest 2020 includes one-act plays by six playwrights.  I Feed You Defiance explores the challenges of Black and Brown women raising sons, while Michael Florence’s On The Corner relays the story of three death row inmates. Vernon Williams’ Being Black offers two vignettes about the Black experience in America.

One of Williams’ Vignettes is titled “Working Out the N-Word”, which takes the form of a debate between two African American men about the appropriate use of the word among Blacks talking among one another.

“Hair Cares” from the theatrical production 'Being Black'

“That's why in a play called "Being Black" it couldn't exist without that,” said Williams. “In the news over the last year there have been children denied graduation, suspended from school, because they wore cornrows. There have been people that have to hire lawyers to retain that job, their livelihood, not  because they were incompetent, but because their hair wasn't acceptable to a corporation.”

Williams likes to call Being Black the first in a trilogy.  “I say that because you can't put all of what it is to be Black in one play. You really can't learn about it in three but if say a trilogy at least if somebody says ‘I loved that play but you shouldn't have left out fill in the blank.”

Williams found himself having to adjust certain of his vignettes in the wake of the killing of George Floyd by Minneapolis police officers.

“It certainly needed to include this historic moment that we're living through right now,” he said. “There was no way to omit that from a piece called being black. “I think that one of the things that's been wonderful about the aftermath of this horrible event is that it's brought people together. In your lifetime, did you ever think you'd see any protests in 380 cities?

It’s important to have African-Americans telling their own stories, Williams said.

“Imagine what it would feel like Germans in World War Two, wrote the story on what it felt to be Jewish, how absolutely repugnant that would be,” said Williams. “Likewise for African Americans to see their experience and their journey framed by people on the outside looking in, who were writing from their own interpretation of what they thought they saw and heard.”

The Indianapolis Public Library will offer e-books, audiobooks and videos that will help patrons explore issues about race and racial equity.