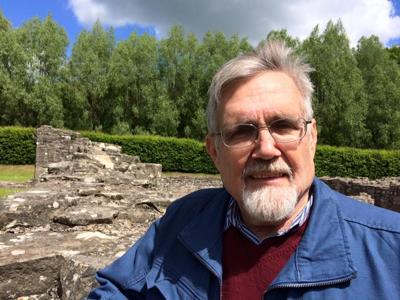 Jim Powell, founder and director of the Indiana Writers Center for its first 20 years, died in Fort Myers Beach, Florida, on January 27. He was 69 years old.

Under his watch, the organization grew from a small community of writers to establish itself as a respected nonprofit organization. Now based in the Circle City Industrial Complex, adjacent to the Mass Ave Arts District, IWC has expanded its mission by engaging schools, community organizations, correctional facilities, and nursing homes in literacy and creative writing programs.

After leaving his role as IWC director, Powell taught in the English Department at IUPUI. A former student of Powell, Rachel Morrow Ferguson, wrote the following on Facebook:

“Deeply saddened to hear of the passing of Jim Powell. I first met Jim in 2004 as my teacher in a poetry class, where I developed an appreciation for his mince-no-words style (which I heard frequently since I was a terrible poet). I will miss his candor and humor and kindness. My heart goes out to his wife, Karen, and their family.”

“I was lucky to have him as my adviser and professor when I returned to IUPUI to finish up my degree in Liberal Arts. He was the first one to congratulate me when I graduated from college.  Writing has always been a distant dream of mine, but Jim taught me that it could very well be a reality. I am an English teacher and work for a small private school that serves children on the autism spectrum, but I continue to write, but mostly for my own pleasure … Whenever I have time to sit down and write, I can still hear him say, ‘Show, don't tell; let the story happen.’ I have read his collection of short stories, and I will continue to learn from him through his writing. He was truly a wonderful man.”

In 2019, Powell published a book of short stories, published by INWords Publications, which commemorated the organization’s 40th anniversary.

If local, independent journalism matters to you, please consider supporting NUVO with a paid membership. In 2019, 100 percent of membership dollars go towards our editorial budget/paying writers.
Arts

Noted Indiana author Dan Wakefield, author of Going All The Way, wrote the following on his blog about the story collection: “Powell gives us swift, telling portraits of a range of men, women and children, as they balance lives in the Midwest, make brief escapes to try to lose their familiar selves in Mexico or Europe; a son contends delicately with a mother losing ground to dementia, a woman returns from California to pit old boyfriends against one another in an Indiana bar, a married couple tries to negotiate ‘the middle of the journey’ of their married life.”

John Clark, founder of Geekspeak Unique Press and editor of the literary "antholozine" pLopLop, met Jim Powell when he started attending open mic readings at the Slippery Noodle circa 1988.

"As director of the Writer's Center of Indianapolis, as the IWC was then called, Jim hosted the bi-weekly readings there and was also involved in a variety of local literary events and publications," he wrote. "On a whim I'd submitted work to a 'Poetry on the Buses' contest and the goofy satirical poem was printed on posters displayed on city buses and I caught the spoken word bug and became a regular at the Noodle. I found out later from other editors that Powell had advocated for that bus poem's publication and I appreciate that encouragement ... I know for certain that he made many things happen for the Indy literary realm."

The following appeared on the IWC Facebook page on Wednesday:

“The Indiana Writers Center exists because of Jim’s vision, and his drive and desire to support writers in Indiana. In 1979 Powell breathed life into the organization, and because of his efforts writers have continued to find each other, and the resources they need for success in our community, for over forty years.”

Contributions in Jim Powell’s memory may be made to the Indiana Writers Center, Compassionate Choices, and/or Exodus Refugee Immigration. His obituary and funeral details can be found here.