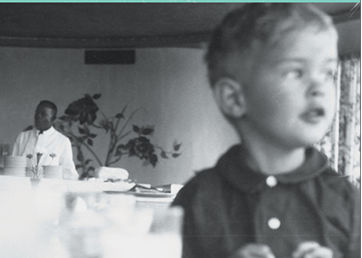 A generosity of spirit enlivens David Hoppe's tale of growing up, post World War II in the North Chicago suburbs. His deft timeline narrative simultaneously runs along multiple tracks. Prompted by a recalled memory, its importance zooms into a commentary concerning its effect on Hoppe's present thinking, checked by a jerk back in time– to consider a moment of naivete or to plumb points of view no longer mainstream.

Hoppe thus travels memory within community/family contexts over two decades, holding us in suspense along 170 pages to learn what does become of this child, part Tom Sawyer, part Huck Finn; navigating between order and adventure. We come to know Hoppe in the midst of a cast of contemporaries, also making their way through toddlerhood, elementary and junior high school culminating in a search for a career beyond high school. The similarities to ourselves, if we stop to think and speak of them, nevertheless, are defined by the parade of events particular to his place, his time, and his situation. For a deeper view, we need to ruminate on our particular-ness, as we take joy in tagging along as he figures things out, faces fears, gains aptitudes and finds abiding friendships.

Reading Midcentury Boy: My Suburban Childhood: From Ike to the Beatles on a steamy, Indianapolis  I forget about being enveloped within the bubble of COVID-19. I drop the angst of social distancing and flow into Hoppe's bustling milieu of activity in Mt. Prospect, Sauganash, and Chicago, Illinois; along the shores of Lake Michigan; to family visits in Miami, New York City, Washington, D.C., where I feel welcomed by immediate and extended family alike. I forget I'm not hearing the annual zoom-rumbling from the Indy 500 or applauding an also canceled neighborhood street parade with kids on decked-out trikes, bikes, wagons; I'm not even concerned about hurrying into the kitchen to prepare a covered dish. I'm not venturing much past the front porch, and no one is coming to picnic.

With Hoppe's book in hand, I'm not a bit lonely, not even alone. Here is the power of a wordsmith to transport a reader into a coming of age reflection that carries the authority of universality. Hoppe takes us through the rhetoric underlying a truism — an important part of being where you're at is through knowing how you got there. Those of us who have worked alongside David Hoppe will be at an advantage to smile knowingly as we acknowledge his passion and his talent.

The book's opening sentence is the lure down the rabbit hole:

"This is the story of what's called a happy childhood."

Really? And that's going to be sufficiently dramatic for a dedicated day of reading? Let me tell you about the so-called 'happy childhoods'. Thus begins the dialogue, and the cover to cover engagement with what happens because Eddi met John and John met Eddi "[o]ne summer day in 1946…"

Reading, I marked pages with slips of paper, intending to share a particular observation, only to reach the end with so many intentions, you'd be reading snippets for a half-hour, so I'm blatantly stating, just buy the book and enjoy it as much as I have. Yet, please, linger over page 45. Hoppe shares an observation from Dr. Mary Fisher Langmuir: "Democracy not only begins in the home but is kept alive and nourished there. Democracy is a faith, a way of life, and not a system…Only children who have been valued and respected…can themselves treat other people with respect and understanding…"

This, in extension, is the spine of "Midcentury Boy."

Here is my email interview with David Hoppe, born 1950 in Mt. Prospect, Illinois, into an adoring, quixotic extended clan. Full disclosure: Hoppe and I have worked together over some 35 years. I don't mind putting him on the spot to extend my delightful reading experience into further comment, even prime him for public programming — once we are out and about and can attend in person.

nuvo.net: When I read your lead sentence, I put your book down, headed to my bookshelf, pulled out Russell Baker's memoir, "Growing Up," in which he details a not at all idyllic Depression Era childhood. On a slip of paper, I had summarized: 'Distilling a childhood into its societal relevance: who should read? why must we care?

Published three-dozen years apart, there's social/economic significance in a joke about 4-year-old Baker, showing he could read: "Maybe we should send him to college," quipped his father. Hearty laughter followed.  Going to college was the serious intent of your upbringing.

Baker in 1982 was internationally known. His memoir ultimately sold over two million copies.

While you might not get that kind of outreach, what is the urgency now to read and consider the gestalt that encompasses your 'happy childhood' in the same kind of retrospect as was Baker's not so good times coming of age story? What is the status of attending college in the context of NOW?

I think the story of what I call "a happy childhood" is relevant now because a large part of our current politics appears to be an effort to somehow recapture that time when America was "great."

It's easy to think that the postwar period was that way because it was, in fact, a time of unprecedented prosperity. The middle class grew as never before. The modern suburbs were created. Wealth was redistributed on a massive scale. Higher education became a growth industry. Those of us who experienced this growth took a certain idea of progress for granted. Many of us (and our parents) believed that we were responsible for what happened. But this period was intentionally created by the implementation of policies like the GI Bill and a formula for taxation that favored middle-income earners. These policies were bipartisan — began under Roosevelt and were perpetuated by Eisenhower. The story I'm trying to tell is about how and why we took these policies for granted. And about how our conception of progress, as well racial and gender inequities, made this society unsustainable.

You are correct that higher education played a big role in my generation's upbringing. It was then and remains part of our society's formula for social advancement. But it looks more and more like an artifact of another time. The corporatization of higher ed administration, the hyperbolic competition between campuses that creates lifestyle-oriented building projects with little or no academic relevance; the transformation of teacher-student relations into a retail transaction and finally, the way in which the entire edifice has been based on family and student debt suggests a degree of corruption that should call the entire enterprise into question. I think we need a radical rethink about what people do after secondary school. I think we're beginning to see this happening in the marketplace.

nuvo.net: How can you envision Midcentury Boy at the fulcrum of a seminar examining memoir writing as a way to understand the past and project a future within the now of COVID-19, as a defining change agent for a new generation; as a learning to cope with a huge change for the rest of us?

Midcentury Boy is an exercise in memory that recognizes that the personal is inevitably also linked to larger social, political, and cultural tides. We are all part of the time in which we're born and come of age — and that time includes our parents and even our grandparents. COVID-19 presents a new challenge, comparable, perhaps, to the challenge my parents faced during the Second World War, an event that dramatically disrupted everyday lives for years, in which virtually everyone knew at least someone, a neighbor or friend, who was lost forever.

Now, as then, an ability to cope will be based on the strength of personal value systems. But then there was also a federal government willing and able to aid and abet individual aspirations, to make opportunities available in real and tangible ways. We don't have that. And that absence puts our collective future in jeopardy.

nuvo.net: Baker's follow up memoir The Good Times is set within the years of your own growing up. Baker extends his mother's admonition: "Make something of yourself," into his introspective question: "How can I do something really worth doing?"

What now in this suspension between a ”this is how things are” past and a worrisome future can you offer as guidance to the graduating class of 2020 based on your own understanding of facing your own future in the midst of 1970s societal turmoil? What now needs to be considered as 'really worth doing' in the context of what you decided was really worth doing?

When I graduated from college in 1973, the country was in the midst of its worst recession since the Great Depression. It was not a great time to be looking for work. I did odd jobs for landlords, helped unload trucks, worked retail, etc., etc. until I finally got the memo that my bachelor's degree was the equivalent of a high school diploma and I better get into a grad school if I wanted a supposedly white-collar job. I was also writing but understood quickly that this wasn't likely to be a livelihood. All I can tell you is that the scene, in my adult life, has never been congenial as far as what we call the humanities or the arts are concerned. But the fact that I attended a liberal arts college and graduated with a degree in English has, I believe, helped me make a life for myself that would not have been possible had I been trained in a more specific discipline. Being a generalist enabled me to work across a number of fields. Maybe that can still work today, but I'm afraid those opportunities are becoming more scarce. I was educated. Most people today, from kindergarten up, seem to me to be trained. There's a difference, and it's a humanly limiting difference.

nuvo.net: Indianapolis native Gene Glick, opened his 1997 memoir, "Born to Build," with this statement: "I suppose I've always been interested in the way families shape people."

Your memoir, as is Glick's, is rich with growing up within an extended family, not merely tracing documents. Baker laments disconnect with his heritage; it was not talked about, he states. At this moment, tracing one's ancestry is big.

What within your story now becomes a bulwark for your grandchild, your story already having served as an underpinning for your son? Why should someone in every family gather and, in some form, pass along the stories published or not? Why will each of us knowing our heritage strengthens community and build good relations between citizens?

We are our stories. I think it's important for us to tell them so that we can own our experiences and be fully present in this time, today. Memories and history are also part of this experiential reservoir. I never really knew one of my grandfathers, but his being has informed my life in ways that are no less real for our lack of actual contact. We don't exist in a vacuum and none of us is alone. Coming to terms with the past — collective and personal — is about being in the moment and being yourself.