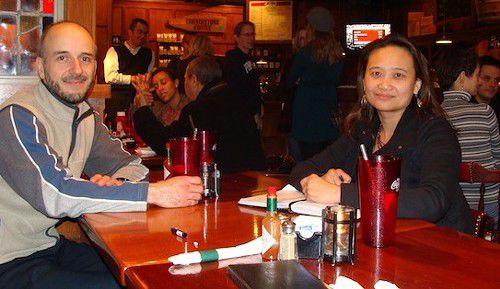 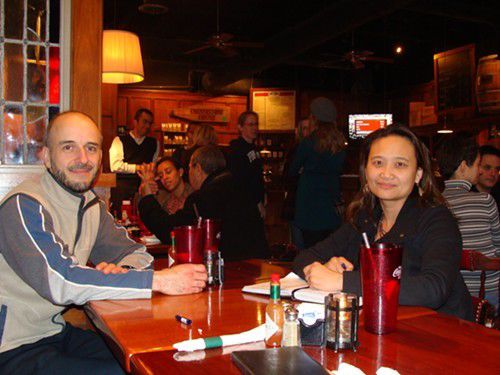 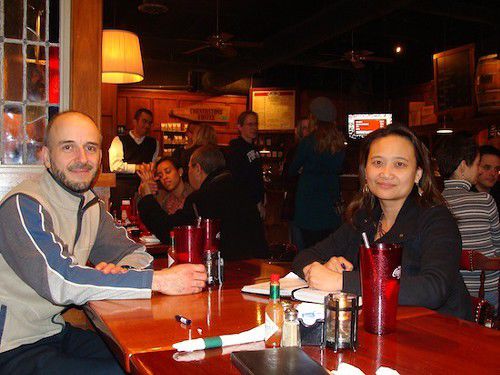 “The French are free electrons," Benoit Menez told me a few weeks back during a French Social Night at Cornerstone Coffee House (located within the sprawling

complex). “We’re not as gregarious as the Germans.”

Despite Menez’s contention, you can often find a dozen or so of these “free electrons” at Cornerstone engaged in friendly conversation during these bi-monthly meet-ups. The freewheeling conversations, mostly in French, cover just about every topic imaginable.

Menez, an engineer who works at Roche Diagnostics, came to the United States from France in 1998. But one of the things that you quickly realize, at these meet-ups, is that only a fraction of the participants are native-born Frenchmen and Frenchwomen.

Often the participants (and organizers) of these events come from Francophone countries, such as Senegal or Lebanon, where French is spoken as a second language.

Claire Ty, who was also at the Cornerstone on Feb. 9, immigrated to France when she was five years old. In her native Cambodia, French is still spoken as a second language due to the history of French colonization there. Ty came to the United States in 1998, and she is currently an attorney practicing in Fishers.

The Alliance Française, which sponsors the French Social Night, has had an Indy chapter since 1989 to serve people like Ty as well as native-born Frenchmen. It also serves to educate Americans about French language and French culture. Some of the other activities the Alliance sponsors are wine tastings and Bastille Day celebrations.

That so many French-speakers have found themselves in the Circle City is no accident. The presence of high tech firms in the Greater Indy area, like Roche and Thomson, acts as a magnet for highly-skilled workers from all over the world.

While many participants have international backgrounds, you don’t have to be a Francophone to participate in these free-spirited conversations. You don’t even have to know any French. It’s rare, in fact, that someone in the conversation group doesn’t speak good English. But an interest in French language and culture (that is, being a Francophile) doesn’t hurt. And one of the things you learn, when you participate in these groups, is that there are many varieties of French.

A topic of discussion that Benoit Menez engaged in that evening, in fact, was how one particular French word, gosses , means different things on different sides of the Atlantic. In France gosses means children, while in Quebec the word is slang for testicles.

Menez also shared his impressions of the United States when he first arrived in this country. “I was surprised by the religiosity, the number of churches per square mile,” he said.

The next Indianapolis French Social Night is tonight (Feb. 23) from 7:30 to 10:30 p.m. at Cornerstone, 651 E. 54th Street. Meet-ups, held on the second and fourth Thursday of the month, are free with no reservations required.