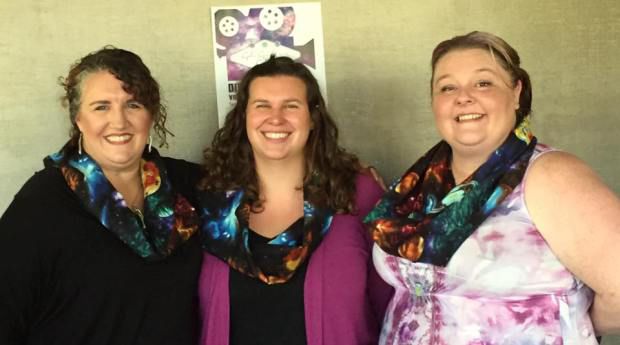 But you have a chance to catch up each Friday this summer when the women behind Gal’s Guide to the Galaxy will release a new episode of their podcast Your Gal Friday on galsguide.org, about the life and times of these four women in June.

Ultimately, the site will feature podcasts about more than 75 other women of art, science, culture and history.

Recently, the group read Hidden Figures before attending a screening of the film, followed by a discussion of the real-life women who worked for NASA. Chaplin has also recently shared her knowledge of all things Wonder Woman for the May 2017 Gal’s Guide meeting and around town. She has frequently lectured about women filmmakers at film festivals based on her personal experiences and extensive research.

Meetings, which take place on the last Thursday of every month from 7 to 9 p.m., are open to all ages and genders, not just* those who identify as women. On June 29, the group’s topic is a Summer Reading List from Gal’s Guide at Barley Island Brewing Company in Noblesville.

Chaplin, Amsler and Harris also want to reach out beyond those who attend the meetings.

“It can be scary to travel across town, join a room full of strangers and put yourself out there,” says Amsler. “Some women only connect with us online, and that’s okay. Other women have commented, joined the discussion, and then made the leap into a meeting or event. That’s great too! We are honing our mix and I expect it to change continuously over the years.”

Chaplin, a Noblesville-based filmmaker, and Phoebe Frear, an up-and-coming local filmmaker, research and host the podcasts that Gal’s Guide release.

The research process for each subject, says Chaplin, takes a couple weeks, including subject determination. She and Frear discuss what they would like to learn and then split up the questions, do the research and interview each other for the podcast recording.

On the first podcast, Chaplin and Frear discuss Guy-Blaché’s work as a filmmaker of more than 1,000 films from 1896 to 1920, including why they thought her male contemporaries are more famous, whether she realized her own success in her lifetime, and why other filmmakers should know more about her. Most notably, Guy-Blaché’s innovations in the early years of filmmaking included color, sound, interracial casts, and the concept of acting “natural” on camera.

Chaplin and Frear say future podcasts will have a similar back and forth, conversational tone, and may feature guest speakers.

“I feel like sometimes we talk about people in history or celebrities,” says Frear, “as if they are at a higher level than us that we cannot reach or relate to, where in fact, we can all make our mark in history just as much as these gals have and we are all human. Life is messy. We make mistakes but we can also still do a lot of good in this world.”

Gal’s Guide presented a program called “Women You Haven’t Learned about in School” in March for Women’s History Month, including classes in Pike Township and at Ball State University. Chaplin says she anticipates more classroom appearances in the 2017-18 school year. By the time fall semester starts, more podcasts will be available for students who want to learn more about specific women.

“Having support and creating a connection to the amazing women that have come before them is essential to inspiring women to follow their dreams even when they aren’t supported by the rest of society,” says Harris. “I’m especially proud of Kate’s school-age outreach, that young girls are getting a chance to learn about important women in history and find new heroes.”

“What I hope the audiences will be inspired to look beyond a history book or a movie screen,” says Chaplin, “and find connections and lessons that make their life fuller, richer and more connected to this galaxy we all share.”