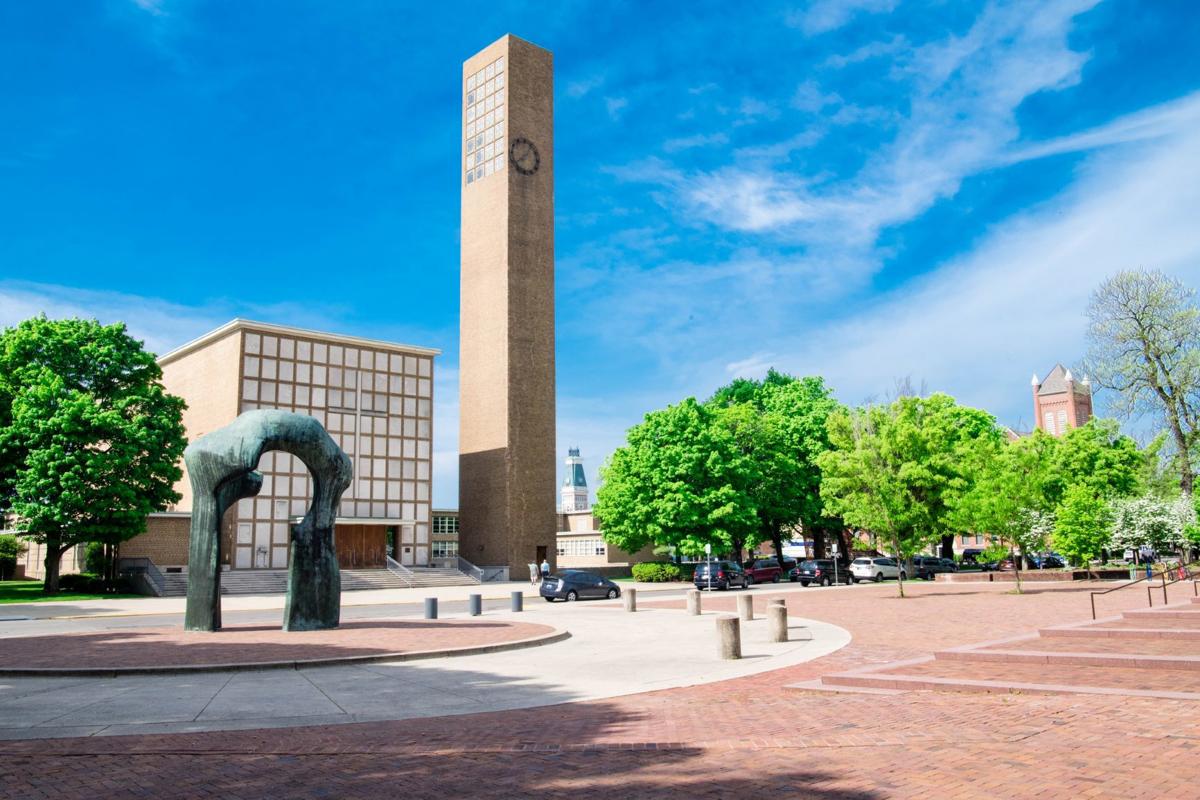 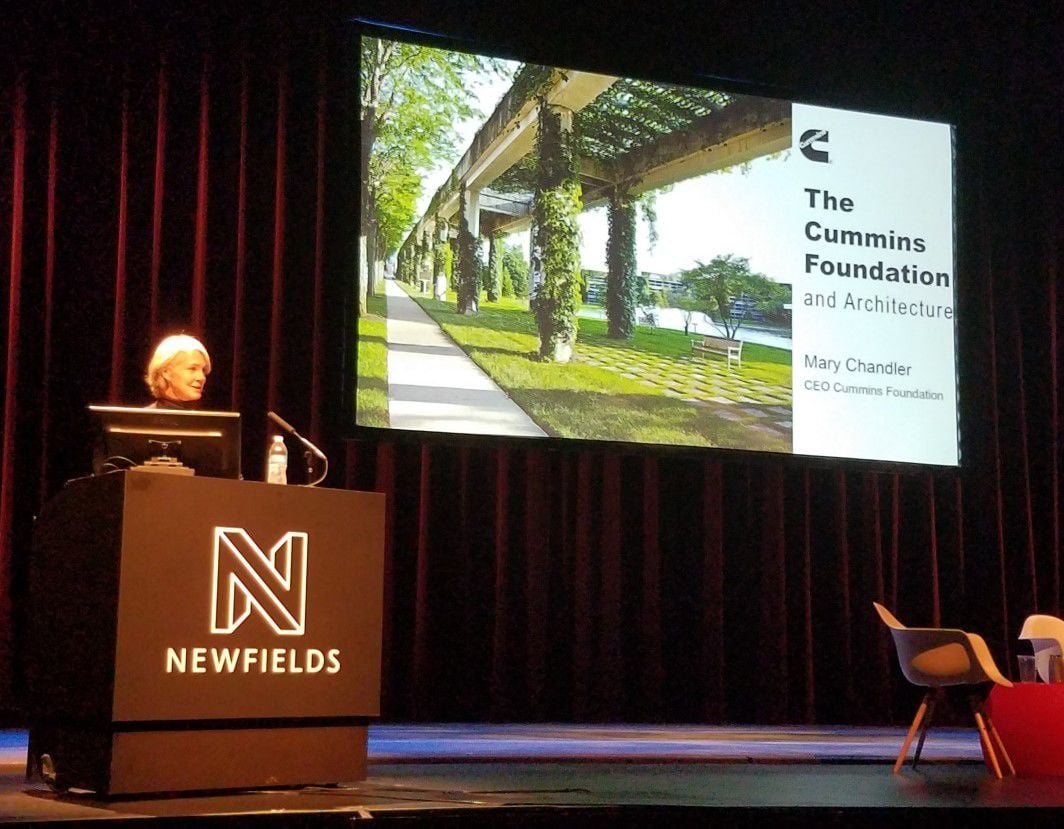 Sept. 26,  I went to the Toby Theater at the Indianapolis Museum of Art for an evening of conversation titled “Foundations for Design.” The short series of lectures, followed by a panel discussion, featured representatives from the Cummins Foundation, IKEA, and Herman Miller Cares talking about their philanthropic strategies and philosophies.

The conversation was moderated by the IMA’s associate director of design and decorative arts Shelley Selim, and wasn't restricted to the topic of design.

This event was part of the second Exhibit Columbus Symposium. The first was held in 2016.

In odd years, Exhibit Columbus holds a biennial design competition based in Columbus, Indiana. In 2017, some of the world's best designers and architects had the opportunity to build installations in Downtown Columbus and have their works judged by a jury of their peers.

The night of Sept. 26 marked the first time Exhibit Columbus has held an event at the IMA at Newfields. In Indianapolis. But why not? After all the Museum is now the caretaker and owner of the iconic Miller House in Columbus so it’s a natural partner.

The remainder of the Exhibit Columbus activities, lectures, and discussions, which lasted through September 29, took place in Columbus.

The Exhibit Columbus participants at the IMA were treated to a tour of the newly revamped Design Arts Gallery in the afternoon. But by the time I arrived, and caught up with my group, they had just entered the IMA Library.

Blueprints and various design memoranda for the Miller House, completed in 1957, were laid out on tables for our inspection.

It was no surprise seeing the fascination and reverence with which the design and architecture professionals in the room viewed these relics from the Mid-Century Modern era.

The Miller House is, after all, one of the crown jewels of architecture in Columbus. The home, designed by Eero Saarinen—the architect who designed the Gateway Arch in St. Louis—was built for J. Irwin Miller and his wife Xenia and completed in 1957.

The Miller name is inseparably interwoven with the history of Cummins. Miller served as both president and chairman of the company. He also triggered the development of Columbus into an architectural mecca when he founded the Cummins Foundation Architecture program in 1957.

As Richard McCoy, Director of Landmark Columbus—which spearheads Exhibit Columbus—told me while we walked around the monuments of Columbus back in 2016 on a wet March day, the program was meant to be a sort of quality control mechanism for public buildings in Columbus.

Building Columbus, and some of the country's best architecture

"They have a standing offer for the entire county which says, if you're a nonprofit, school corporation, city entity, library, nonprofit organization, you can apply to their program and if you need to build a building, they will pay the architect's fees if you choose one of their architects,” he told me.

But the Columbus-based Cummins has made its mark on Indy as well.

In January 2017, Cummins opened up its striking, anvil-shaped Distribution Headquarters in Indy, where Market Square Arena once stood.

According to the online Cummins newsletter The Block, the building “abstractly references Cummins global network and its commitment to sustainability, the environment, and its partners in manufacturing and distribution.”

Sustainability was also a topic in the evening conversation on the Toby stage.

Fishers IKEA store manager Holly Davidson mentioned the solar panels the humongous retail store has installed on its roof. Davidson also talked of the work that the IKEA Foundation has done. She highlighted the distribution of solar powered Better Shelters—which last six times longer than a typical emergency tent—to 20,000 refugee families in twenty countries around the world.

I was pleased to hear that every time I buy, say, IKEA Swedish meatballs, a small part of the profit will go to their foundation to help refugees.

But I don't believe that corporate philanthropy on its own, without coordinated multilateral action by the governments of the world, can really put a dent in the major issues of our time. I'm talking, of course, about global warming and the flow of refugees across borders.

Still, corporate foundations have an important roles to play, including as government partners, whether on a federal, state, or municipal level.

This seemed to be the message of Cummins Foundation CEO Mary Chandler who highlighted the municipal decision-making processes in Columbus—where Cummins is often a partner—that she said keep long-term goals in mind.

The symbiosis between Cummins and Columbus is a striking contrast to the relationship between Indianapolis and Carrier, the company vilified by Trump for moving much of its production to Mexico.

Trump, in addition to vilifying companies with production overseas, has also come out strongly against the legal immigration that high-tech companies in the US depend on. Consider the opening paragraph from the New York Times article dated Sept. 2 2018, titled "Companies say Trump is Hurting Business by Limiting Legal Immigration":

The Trump administration is using the country’s vast and nearly opaque immigration bureaucracy to constrict the flow of foreign workers into the United States by throwing up new roadblocks to limit legal arrivals.

Not surprisingly, considering Trump's hostility to a significant part of Cummins' workforce, one of the of the values that Chandler brought up in her lecture was diversity.

She mentioned during her lecture the fact that Cummins CEO and president Tom Linebarger, in August, 2018 won the Man of Achievement Award from the Anti-Defamation League, and she quoted from a speech he gave there.

With all of these thoughts in mind, after the conversation I asked Mary Chandler to elaborate on her thoughts on the diversity that can be found in Columbus, Mike Pence’s hometown.

But before I did I told her of a recent experience I had walking into Gramz Bakery and Cafe on Washington Street in Columbus, where the predominant language being spoken among the customers there wasn't English.

“It  goes back to the idea that to be a successful company you have to attract the top talent from all over the world,” she told me. “If your talent pool is just in Columbus or Indiana or in the United States, and you’re trying to design highly complex engines, you simply won’t get the best talent. We bring in talent from India, China, Brazil, and Europe to design these very complex mechanical and now electrical engines. And so attracting them to our city and making them feel welcome is essential to the city and to the company.”

I then asked her if she was concerned at all about the current political environment.

Some Thoughts on Exhibit Columbus

An exhibit on public art in Indianapolis

A plinth, a cloud/bank, a foyer, and a wall of thread

After a visiting the new Indiana State Museum exhibit, The Art of the Brick, we talk with the artist about how and why LEGOs came to be his preferred media.