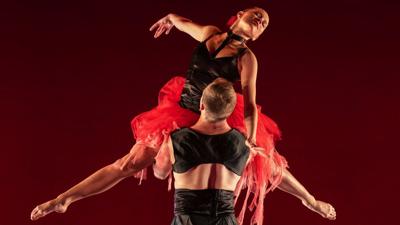 "American Valentine" is Dance Kaleidoscope's dimensional depiction of the multiple facets of love, starting with the lobby installation of Icarus, created by students from Herron High School. Within the Greek myth of Icarus rests an essential aspect of love— harnessing desire for instant satisfaction, striving instead for level-headedness and self-control based on knowing the consequences. Icarus was told by his father, Daedalus, to balance his flight pattern so as not to be scorched by the sun or weighed down by the spay of the sea. The term "Flying too close to the sun "is equated with becoming overly ambitious or greedy.  In all desires, one must seek balance or experience the consequences of rash behavior.

Be hereby forewarned to come early or plan to linger after the performance to study not only this sculpture but other student-driven installations on the upper level, where brief statements of "Valentines to America" from 3rd graders at Westlake Elementary School and longer essays by high school students at Christel House Academy South, bring us into another dimension about what really is important about love of country. "Hope Lives in the  Eyes of Children," reads the banner on the panel from Indiana Writers Center. This exhibit needs more exposure. Can it move to the entryway of the Glick Indiana History Center? 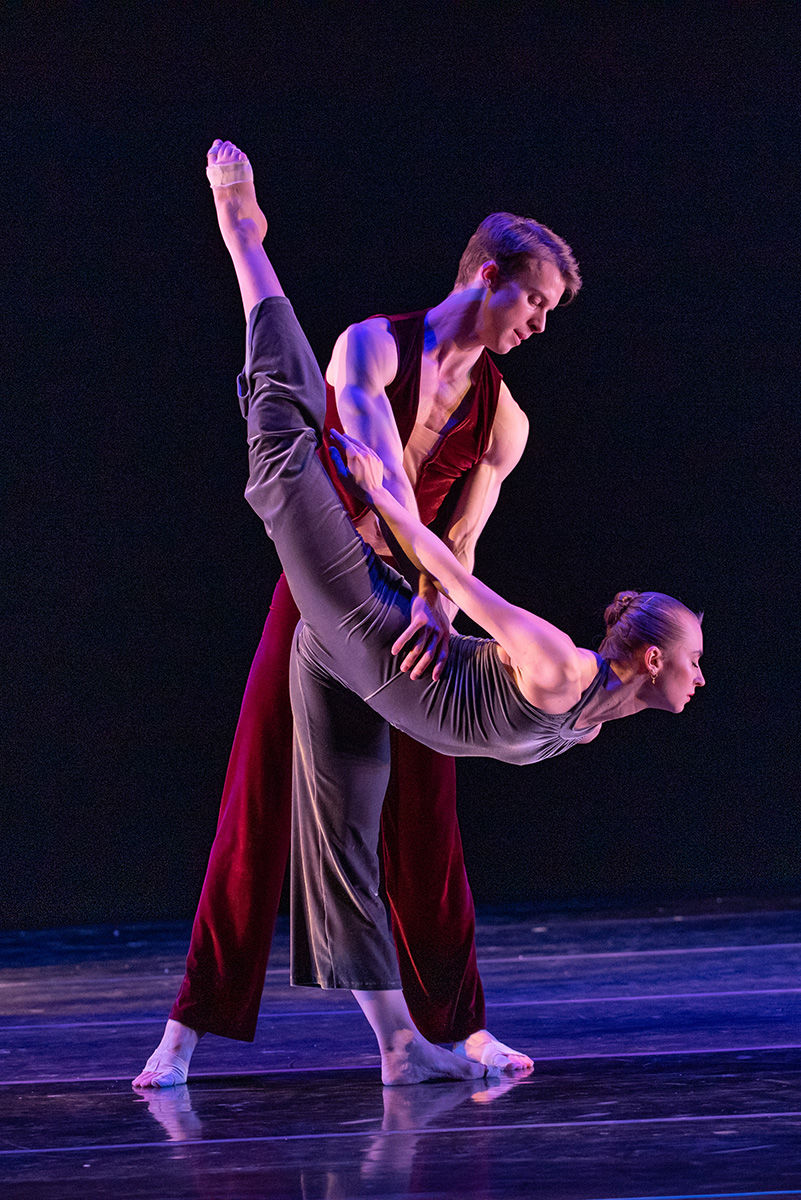 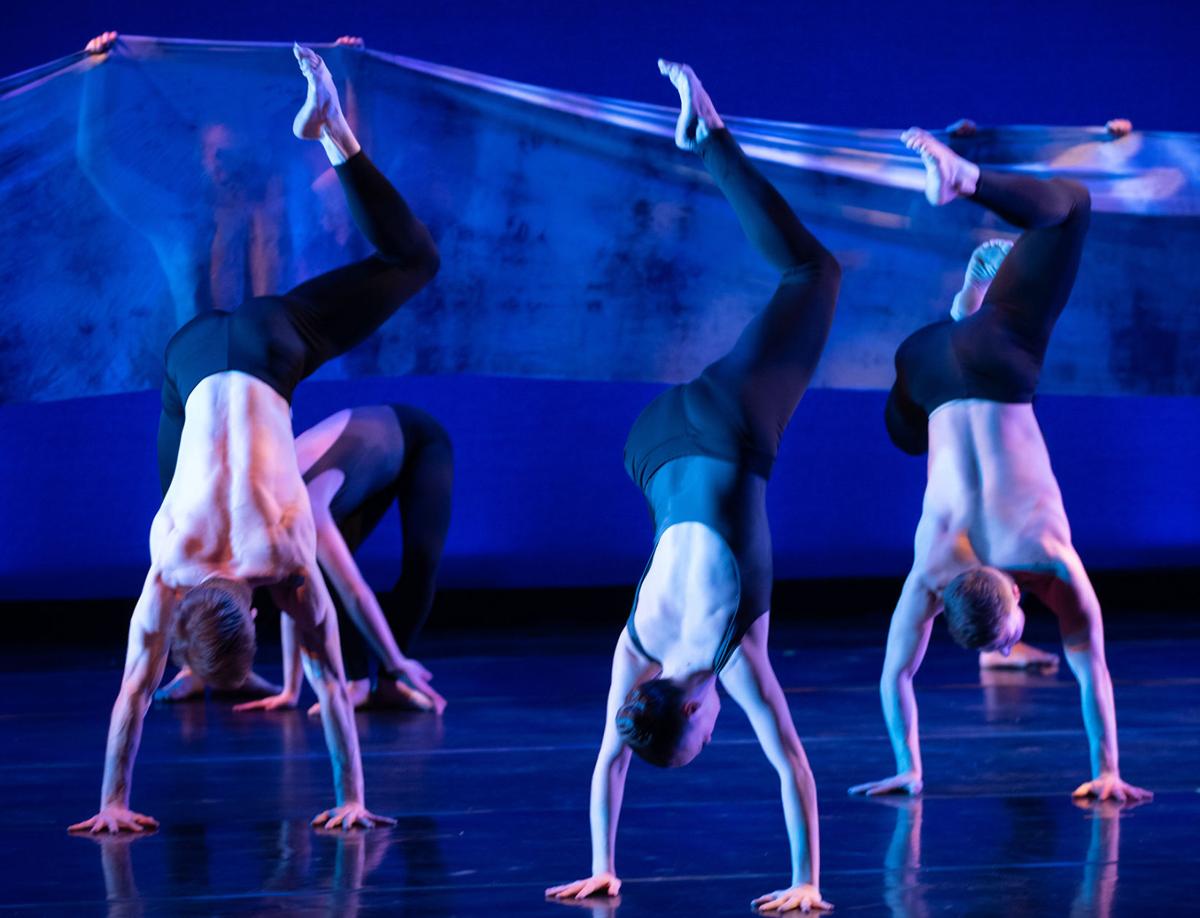 A Home for All, choreographed by Jillian Godwin for American Valentine 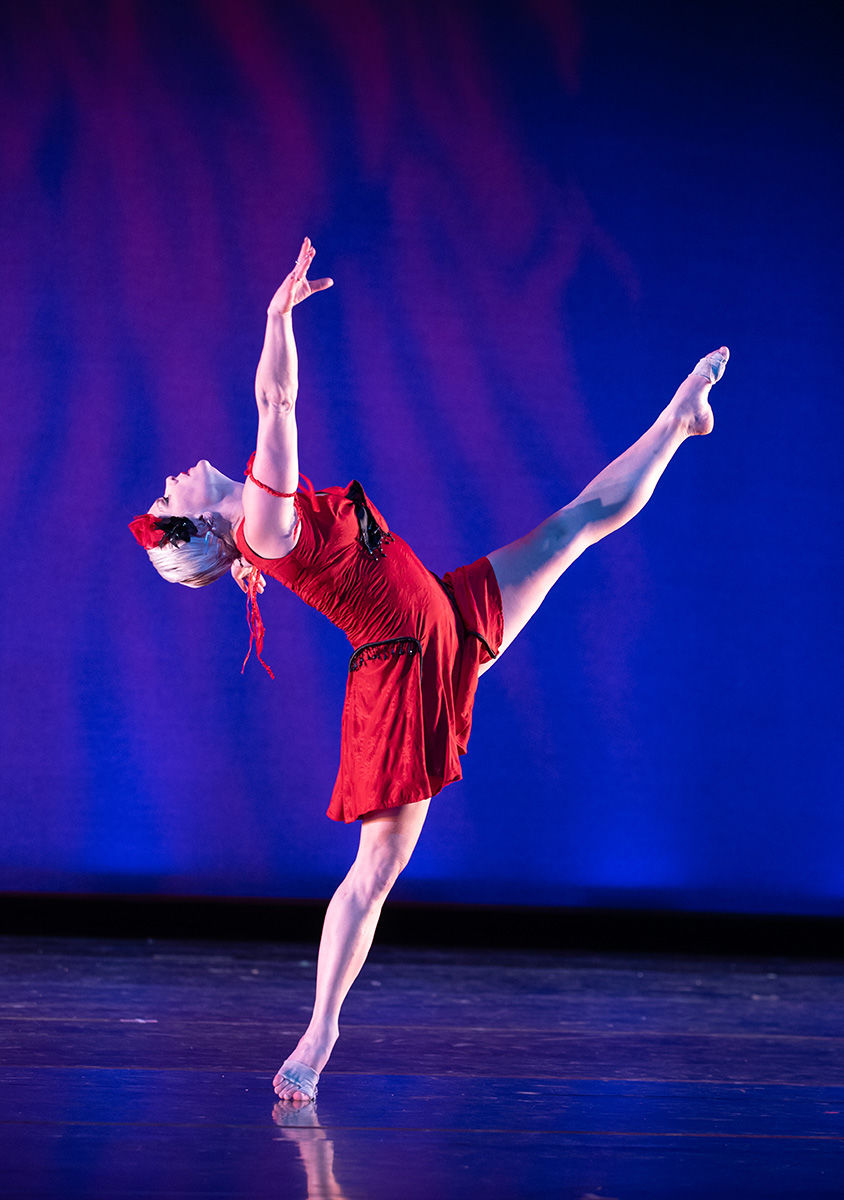 Jillian Godwin in Fire, the spicy finale to American Valentine 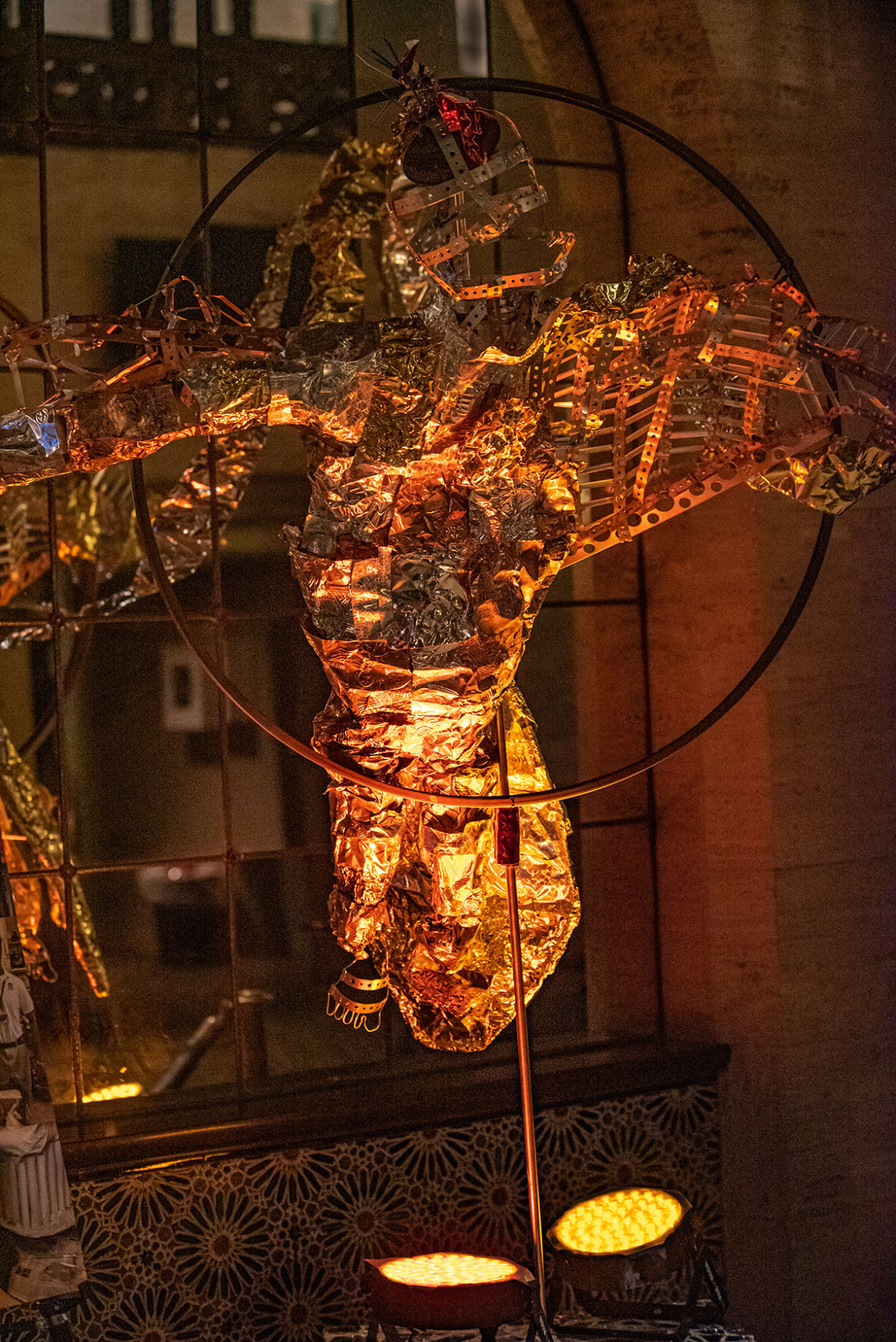 Statue of Icarus, created by students from Herron High School 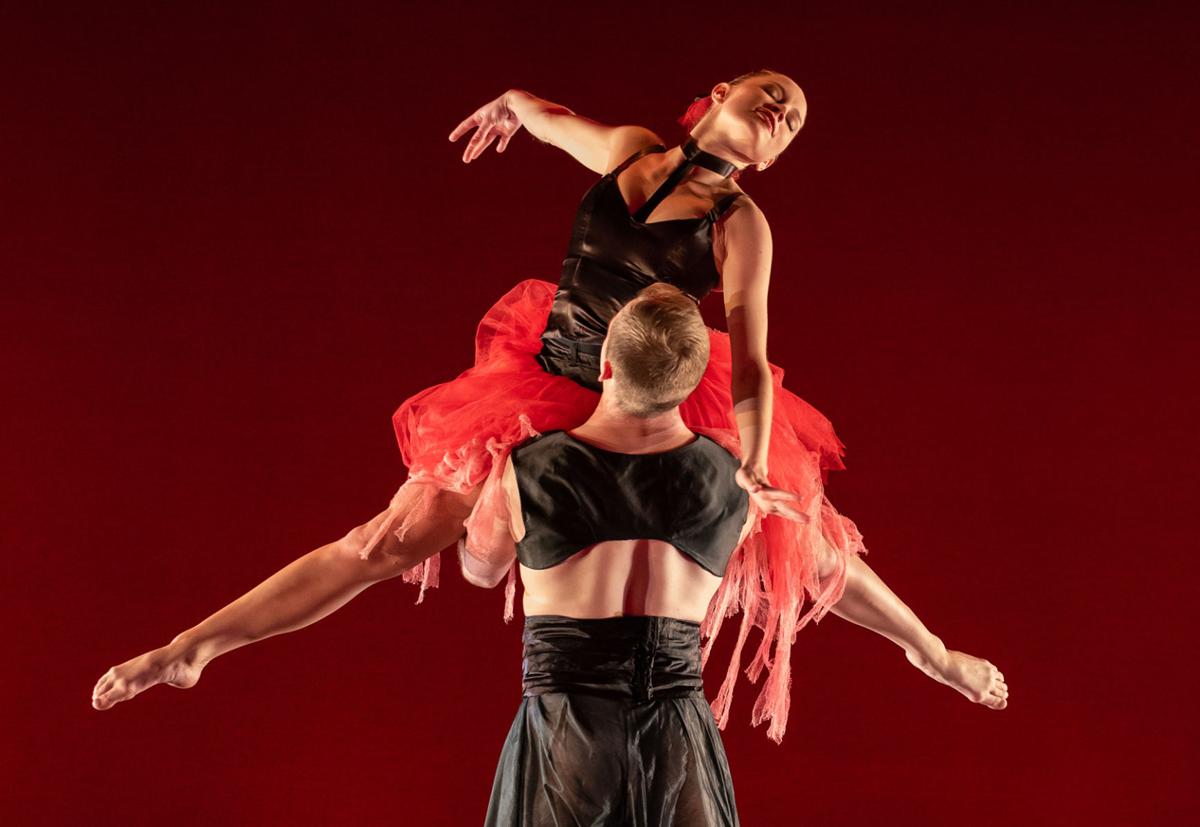 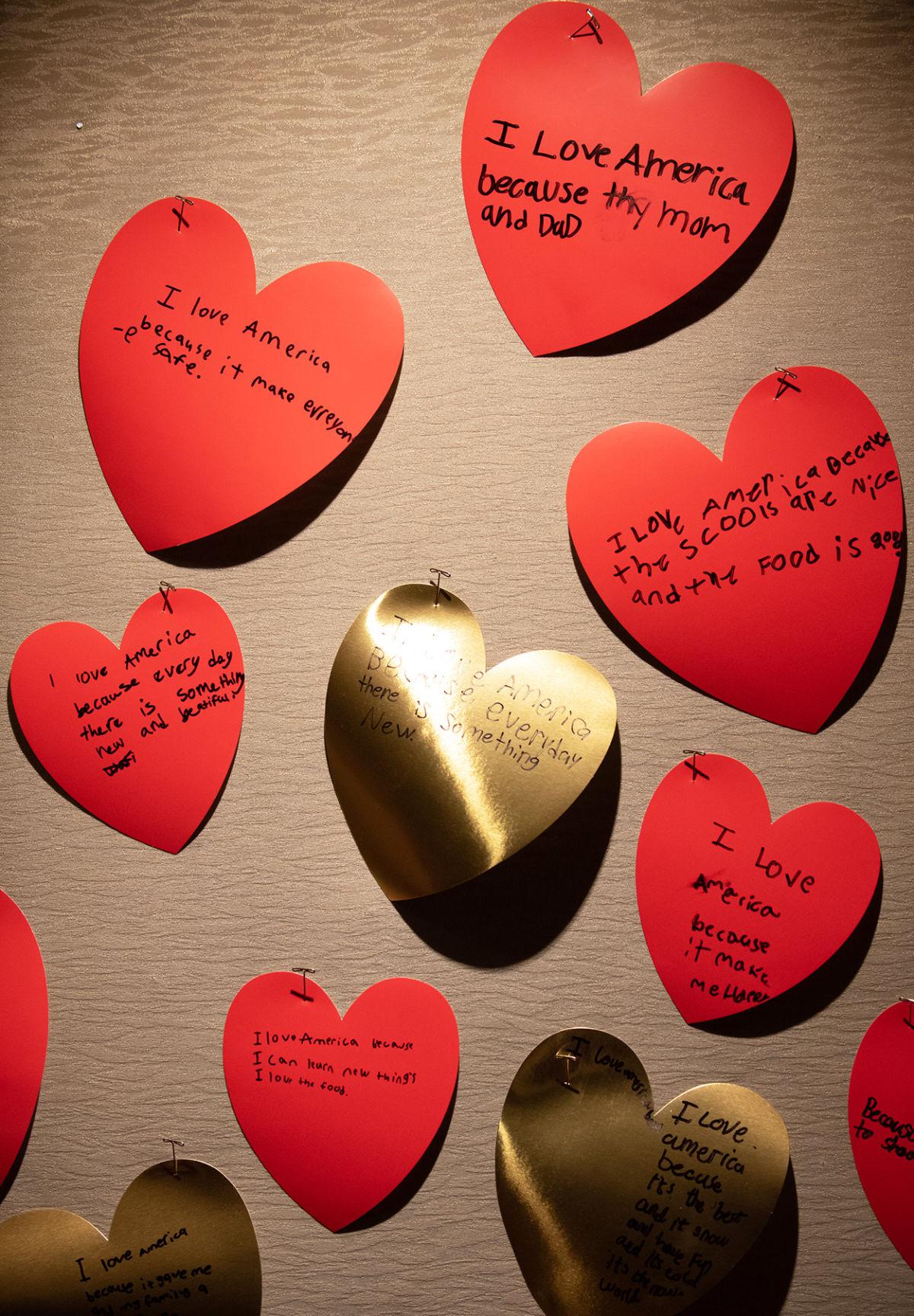 Valentines to America from 3rd graders at Westlake Elementary School

A Home for All, choreographed by Jillian Godwin for American Valentine

Jillian Godwin in Fire, the spicy finale to American Valentine

Statue of Icarus, created by students from Herron High School

Valentines to America from 3rd graders at Westlake Elementary School

Viewed before or after Act One, with its expanding images of "Our America," the impact of both the exhibits and the choreography leaves one with hopefulness.  The seven segments of Act One,  choreographed by DK dancers, premiered at the 2019 IndyFringe Festival on The District Theatre stage, where the up close and personal impact was in turns explosive and tranquil. Opening up choreography on the larger space of IRT's MainStage and its more extensive lighting capacity now provides another dimension. Experiencing this again on a snow-filled dress rehearsal night enabled me to hone into different sets of emotions and gain other a-ha moments from the experience of watching these pieces in the heat of August. And, in truth, a lot has happened in US and world events to awaken different sensibilities for what makes a country great.

This notice just came from the University of Illinois: "The Siberian State Symphony Orchestra has announced with regret the cancellation of its winter 2020 American tour, including its Krannert Center visit planned for Saturday, February 29. The orchestra is unable to secure work authorization at this time. On November 4, 2019, the orchestra filed its I-129 P-1 Petition to the US Department of Homeland Security and US Citizenship and Immigration Services (USCIS). Despite strong support from legislative offices and professional musical organizations, USCIS had not approved the orchestra's petition as of February 4, 2020. As a result, the orchestra is unable to travel to the United States for this performance tour."

In more than one way, this thwarting of a cultural experience resonates with the seven visual essays of "Our America." Mariel Greenlee takes us into "We hold these dreams to be self evident…," animating her essay, "How lucky we are to live in a country that encourages us to dream, to follow our dreams, and to pursue them.  It is a privilege to be one of these dreamers." Exuberance flows from the company of ten dancers.

With The Boatman's Dance, Aaron Steinberg translates "What the landscape made me feel, how I was struck by nature's ability to be both strong and delicate, so expansive and yet so detailed, on  a trip I took to Montana earlier this year.", Paige Robinson with Stuart Coleman, and Jillian Godwin with Steinberg translate emotions of discovery and delight.

Godwin encapsulates "A Home for All" through visual metaphors with the company of dancers reconfiguring an expanse of cloth as a Walt Whitmanesque anthem:'My America opens its armsNot closes its doors.My America believes families belong together,It doesn't strip them apart.My America listens when people say they need helpNot tell them to get over it or man upMy America listens to people who are experts in their fieldIt doesn't bring a snowball into the senate and claim there's nothing wrong with the climate.My America lets women choose what to do with their bodiesIt doesn't govern or punish themIn my America black lives matter, and trans lives, and women's lives, and indigenous lives, and nonbinary lives and it sees the brokenness and the painIt doesn't pretend it doesn't existin my America, love conquers allIt doesn't build walls...This is what America could be and deserves to be. The people that fought and paved the ways deserve to see their vision be lived every day"

For Open Horizon, danced by Jillian Godwin, Marie Kuhns and Natalie Clevenger, Paige Robinson said, "I found this gorgeous music from the Grand Canyon Suite and decided I would focus on a core American value: freedom. Our country was founded on it and I think it is still a guiding force today. I don't believe freedom exists in a vacuum, we had to fight for our freedom initially and we have had to continue to fight to maintain it. Our freedoms are priceless and fiercely protected but also should be acknowledged and enjoyed."

With The Jones Effect, Missy Thompson draws attention to "our freedom and pursuit of happiness. We like to say what makes us most happy are the irreplaceable things, our family, our friends, and our community. But time after time, we find ourselves "keeping up with the Joneses," impulse buying things online, constantly updating our homes, cars, clothes, and our entire lives in pursuit of an ideal image or status. Consumerism surrounds us with disposable promises of this happiness and I believe that as Americans we are at risk of falling into a devastating cycle of accumulation addiction and envy of what others have. Can we break free from the chains that we willingly place upon ourselves, or are we all just part of an endless cycle, a machine paid for and fueled by our dreams and desires?"

Manuel Valdes shared this essay for In the Midst of a Sstorm: "What I love about America is that we have the freedom of choice and the freedom to voice and speak out on issues that matter to us,  but what happens when those voices become stifled or silenced from free expression?   How would it make you feel?   In my piece, I decided to paint this narrative from a woman's perspective and how the pressures of society can affect her mentally and physically.   Does she feel trapped, suffocated, unappreciated; a prisoner in a country she calls home?   At the same time, I wanted to showcase the strength and courage that women portray as they confront difficult societal issues in the wake of ridicule and negative consequences.  Maya Angelou was a big influence on the intent behind my piece this year and I would like to read excerpts from two of her famous poems...First from "I Know Why the Caged Bird Sings"The caged bird sings   with a fearful trill   of things unknown   but longed for still   and his tune is heard   on the distant hill   for the caged bird   sings of freedom. And from "Still I Rise"You may shoot me with your words,You may cut me with your eyes,You may kill me with your hatefulness,But still, like air, I'll rise.

Stuart Coleman's vividly costumed Kaleidoscope closed Act One. "There are ten dancers and five colors (two dancers per color), "explained Coleman, "and my goal was that no one dancer should do the same thing as their counterpart [color]— the reds will dance with the yellows and blues but never the other reds. I think there's some symbolism there because I feel as Americans, we can get so wrapped up in aspects of ourselves that make us different (race, gender, sexual orientation, religion, etc) and we get so wrapped up in these labels, or colors, that we isolate ourselves from different people. I argue that one of the incredible opportunities we have as Americans is to discover commonalities with people that we didn't expect to find— when a red can start to dance with a blue. This is all summarized in a quote by one of my favorite Americans: President John F. Kennedy.... "So, let us not be blind to our differences--but let us also direct attention to our common interests and to the means by which those differences can be resolved. And if we cannot end now our differences, at least we can help make the world safe for diversity. For, in the final analysis, our most basic common link is that we all inhabit this small planet. We all breathe the same air. We all cherish our children's future. And we are all mortal. "

DK showcases the grace and power of intellect of every dancer alongside their technical skills of movement and choreography. There's a lot here to love.

Act Two reprises seven romantic visualizations from David Hochoy's oeuvre and two from guest choreographers Cynthia Pratt and Nicolas A. Owens.  Through the visual articulation of Roberta Flack's rendition of "The First Time Ever I Saw  Your Face, Pratt brings into simultaneous view the building of a relationship through three couples - Jillian Godwin and Cody Miley, Sarah Taylor and Aaron Steinberg, Natalie Clevenger and Start Coleman. Life enfolds us.

Hochoy gifts with:Excerpt from Romeo and Juliet Fantasy," opening as a company scene, and segueing into the growing intimacy between Aleska Lukasiewicz and Kieran King. Have your handkerchiefs close by.

The jaunty pas de trois by Missy Thompson, Manuel Valdes and Aaron Steinberg is a smile-inducing take on Tina Turner's Stand By Your Man.

Emily Dyson and Cody Miley bring a sublime visioning to So In Love. Shakespeare translates as poignantly here as he does in Act Two opening view of Romeo and Juliet.

Doug Dilling singing live on stage to Matt Alber's End of the World, imbues the lithe dancing by Stuart Coleman and Kieran King with heartbreak and hopefulness. The pacing allows one to savor the unfolding poignancy of promise made, promise kept.

Sarah Taylor and Aaron Steinberg take Some Enchanted Evening into the realm of everlasting ecstasy.

Act Two closes with nonstop exuberance emulating  Tito Puente's Fire from The Four Elements, featuring Jillian Godwin and Emily Dyson amidst the company.  Here, as throughout, costumes and lighting are companions with the dancers. Altogether, this program sends us home joyful yet cognizant of the consoles of taking love for granted, be it of country, landscape, ideas or of the romantic bent.

Up next: Edge of Innovation, May 28-31, IRT OneAmerica Stage