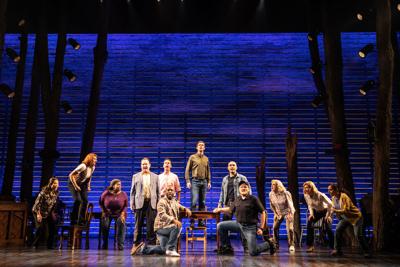 "Come From Away" comes just at the right time to remind us of the power of kindness, efficiently working in unity, reflecting on positive memories to move forward. 9/11 is a code for vulnerability. A full generation ago, the impossible happened. More destruction was averted when Operation Yellow Ribbon diverted already airborne flights to airfields throughout Canada, averting further destruction to U.S. targets. It meant grounding all Canadian airlines to allow clear passage for diverted flights coming from afar.

It was an immense, neighborly undertaking. It continues as a beacon of humanity and efficiency. The Canadian government, under Jean Chrétien, the Prime Minister of Canada, stepped forward and, with a united citenzery, undertook the second most amazing rescue attempt in my own memory —Dunkirk being the signature event of my childhood. History is personal. This is what makes "Come From Away" so compelling. Its impact is applause for every resident of Canada, where the story of Operation Yellow Ribbon continues to gain traction.

The play encapsulates in one hour forty minutes the spirit that propelled the small community of Gander, Newfoundland, Canada, to act positively in the face of mayhem. Twelve actors, in a setting as efficient as the real events, take on multiple roles as townspeople and as stranded passengers. It's all true, from the incredulous to the discomfort, to the clashes between individuals and groups, to the eventual camaraderie.

In the wake of the tenth anniversary of 9/11, Canadian playwrights and composers Irene Sankoff and David Hein zeroed in on the town of Gander, to collect the stories of residents, and then went further afield to collect stories from a cross-section of the 7,000 passengers and flight crews aboard the 38 planes that were rerouted to Gander on 9/11. Canada's goal was to ensure that potentially destructive air traffic be removed from United States airspace as quickly as possible, and away from potential U.S. targets, and instead place these aircraft on the ground in Canada, at military and civilian airports in the Canadian provinces of Nova Scotia, Newfoundland and Labrador, and British Columbia, with a fewer number each in New Brunswick, Alberta, Manitoba, Ontario and Quebec.

On September 11, 2002, marking the first anniversary, about 2,500 people gathered at Gander International Airport for Canada's memorial service. Jean Chrétien, the Prime Minister of Canada, encapsulated what the world was recognizing. "9/11 will live long in memory as a day of terror and grief. But thanks to the countless acts of kindness and compassion done for those stranded visitors here in Gander and right across Canada it will live forever in memory as a day of comfort and of healing"

Commending Operation Yellow Ribbon, Chrétien added," You did yourselves proud, ladies and gentlemen, and you did Canada proud."

The musical follows suit, doing this moment in history proud. The minimalist set imbues fulsome production values stemming from the very same no-nonsense-get-it-done attitude that underlies the real events. A dozen actors, the same number of chairs, a few tables, a wall, and amazing lighting take us through events like a time capsule. It's an arc from landing to take-off, from shock to friendships, from terror to trust. There is no huge production number; nothing stops the show, except maybe those one-liners from real people who are funnier, wiser, more endearing than conjured up characters. The choreography showcases real movement to the real rhythms of life.

It's an astonishing production from concept to delivery. You can read the trajectory of how it grew since 2011, with producers who believed in the concept, theatre companies willing to develop, directors, designers, actors committed to perform.

January 17, at Clowes, audience members did come from afar to witness the performance. Everyone connected, the ovation was real.

The opening night notice read: I have a very pleasant surprise for the entire Tuesday night audience! Former Gander mayor, Claude Elliott, who was mayor during 9/11 and is portrayed in the show, will be in attendance with the Canadian Consulate General and two local "plane people," all of whom will be doing a post-show panel discussion. Please stay and listen to these fascinating and moving stories.

On Jan. 17, opening night at Clowes, the audience was invited to stay after the performance to hear the reactions to the play from four people intimately connected with the 9/11:  Joseph Comartin (Consul General of Indiana), Claude Elliott (Former Mayor of Gander), Marcia Anderson (Fishers, IN Delta flight attendant diverted to Gander), Deborah True (Fishers, IN passenger diverted to Gander). Speaking from their perspectives eighteen years later, all four touched on how the play resonates with truth of what did happen, and how the play accurately imparts to an audience member the depth of humanity in a crisis situation being able to come together to  and not only get along, but make enduring friendships.

“Come From Away” company member Kevin Carolan, who plays Mayor Claude and others, served as the panel moderator.

“Come From Away” will be in Louisville, May 5-10, 2020.  Get tickets at: www.kentuckyperformingarts.org