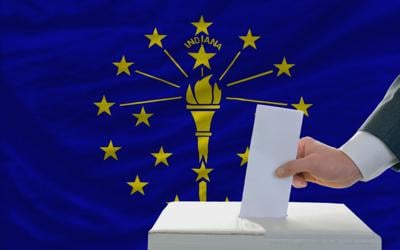 'Use it or lose it' isn't just a gym workout adage; it's equally essential for active civic engagement.

The Preamble to our Constitution explicitly calls on all of us, per: "We the People of the United States," and itemizes what we're called upon to do and why: "in order to form a more perfect Union, establish Justice, insure domestic Tranquility, provide for the common defense, promote the general Welfare, and secure the Blessings of Liberty to ourselves and our Posterity, do ordain and establish this Constitution for the United States of …"

"We the People…" All of us, not just a select, or elect, few, have been granted rights and have been charged with responsibilities as citizens in our American democracy. In 1776 The Preamble to the Constitution succinctly defined the powers of the new government as originating from the people of the United States. That power from the people is still supposed to be operative. In Indiana, there's a problem with whose vote counts in elections; there's a problem with malaise about voting; there's a larger problem with access to information and the ability to assess data to make educated choices.

"How Do I Count," is a double entendre title for a 4-part series at the Eugene & Marilyn Glick Indiana History Center, to explore who exactly is a participant in' we the people.' The original verbiage granted voting rights to a select few. Succeeding Amendments enlarged the scope: the Fifteenth Amendment, passed in 1870, states, "The right of citizens of the United States to vote shall not be denied or abridged by the United States or by any State on account of race, color, or previous condition of servitude." 2020 marks the centennial of the 19th Amendment granting women of all color the right to vote. However, it wasn't until the Snyder Act of 1924 that Native Americans, male and female, were granted the rights of U.S. citizenship, including the right to vote.

'Power from the people' thus has been meted out as a right to determine on our own, through voting for who we want to be entrusted to govern on our behalf. Nevertheless, a select few have found ways to curb these granted rights through free and fair elections; thus, not everyone counts in the choice making.

Gerrymandering, a.k.a. keeping some of our votes from counting in elections, was the first topic on February 6.

Dictionary.com defines Gerrymandering in U.S. Politics "as the dividing of a state, county, etc., into election districts so as to give one political party a majority in many districts while concentrating the voting strength of the other party into as few districts as possible. Words related to gerrymandering are: fix, manipulate, falsify, engineer, juggle, doctor, fake

The Britannica on-line essay by Brian Duignan provides a historical perspective. "Gerrymandering, in U.S. politics, the practice of drawing the boundaries of electoral districts in a way that gives one political party an unfair advantage over its rivals (political or partisan gerrymandering) or that dilutes the voting power of members of ethnic or linguistic minority groups (racial gerrymandering). The term is derived from the name of Gov. Elbridge Gerry of Massachusetts, whose administration enacted a law in 1812 defining new state senatorial districts. The outline of one of these districts was thought to resemble a salamander. A satirical cartoon by Elkanah Tisdale that appeared in the Boston Gazette graphically transformed the districts into a fabulous animal, "The Gerry-mander," fixing the term in the popular imagination." [see: https://www.britannica.com/topic/gerrymandering

Basically, gerrymandering violates the 14th Amendment to the U.S. Constitution, which was written to assure that "as nearly as is practicable, one man's vote in a congressional election is to be worth as much as another's" as affirmed by the U.S. Supreme Court in 1963.

Duignan's essay provides visuals for what fair district voting lines should look like in accordance with the population and their stated party preferences. Manipulation of boundaries, however, can entirely wipe out the votes of an entire group of people. Even if they show up to vote, their votes have no weight towards an outcome. The effect becomes a one-party system of governance, with a dis-enfranchised electorate on one side and a privileged electorate on the other side. Research, as well as on-the-street observation, shows elected officials from gerrymandered voting districts are prone to overlook the needs of the 'minority voters', while passing legislation that benefits the 'majority' voters. Statewide, Indiana is patently unfair in its lines for voting districts, shutting out minority voters in how they want to be governed.

One outcome of this is to manipulate our educational system from providing intellectual tools and hands-on training to be active citizens. Living democracy requires political engagement by each of us, every day, to ensure the benefits of democracy that enable everyone to acquire education and skills for economic opportunity and security, which includes access to an affordable and uplifting place in which to live, good food, health care, and mobility. Democracy, in its living sense, is engaging in the life of the mind and making positive impacts for the greater good of all. Each new generation gains leadership skills by example and through mentoring from their elders.

At the present time, civics is not universally taught in schools across Indiana. However, in Indianapolis, the Benjamin Harrison Presidential Site, in conjunction with the New York Historical Society, provides a free educational program to help prospective U.S. citizens learn more about the American system of self-government. The operative thrust here is' self-government,' and the irony is that its purpose is to inculcate 'prospective U.S. citizens.' The Benjamin Harrison Presidential Site also offers Citizenship in the Nation Merit Badge Workshops for Boy Scouts and Girl Scouts, with these enticements: "What does it mean to be a Citizen? Find out at the home of Indiana's only U.S. President"

For the record, "On June 21, 1892 President Harrison signed the proclamation that said, "Let the National Flag float over every schoolhouse in the country and the exercises are such as shall impress upon our youth the patriotic duties of American citizenship!"

Along with flying the flag came reciting the Pledge of Allegiance.

Francis Bellamy, who wrote the Pledge, first printed in Youth's Companion, September 8, 1892, visited President Benjamin Harrison in Washington to ask him to endorse the idea of a flag over every schoolhouse and the teaching of patriotism in all the schools.

Democracy requires each of us to work everyday towards its highest tenets. The Pledge of Allegiance provides the impetus- "with liberty and justice for all."

On February 6, the session at the Indiana History Center covered the conundrum of fair districting [cutting up the state of Indiana for voting locations]. Depending on your point of view, what we now have in Indiana is or is not fair.

Marion County Superior Court Judge David J. Dreyer led us through Indiana's current map of voting districts. Dreyer's honest appraisal of why Indiana's map has been appraised in an Associated Press study as 'not fair' hinges on, "It's the nature to figure out how to get power and maintain that power."

The Republican party, which controlled both chambers of the Indiana legislature in 2010, redrew district maps to its advantage, using two different tactics," Cracking," which spreads voters of a particular type among many districts in order to deny them a sufficiently large voting bloc in any particular district, and "Packing" which concentrates as many voters of one type into a single electoral district to reduce their influence in other districts..

In 2016, Rep. Jerry Torr, R-Carmel, chairman of a legislative study committee recommended a bipartisan independent commission be used to determine political lines ahead of the upcoming redistricting in 2021. The bill to enable this was referred to, but thwarted by, the Committee on Elections and Apportionment.

Judge Dryer rhetorically asked us, Do you want the members of the legislature drawing the maps so the party in power can stay in power, or do you want the voters to pick their representatives?

Julia Vaughn, Policy Director for Common Cause Indiana was one of the attendees. She described Common Cause Indiana as a co-founder of the bipartisan, 13-member Indiana Coalition for Independent Redistricting and urged us to help build support for redistricting reform by working within our local government entities, the city council, county commission, town board, to pass a resolution in support of redistricting reform legislation to create a website that will allow Hoosiers to draw their own districts and submit them to the General Assembly for consideration.

Within days, that became a moot endeavor. The Common Cause Indiana website posted: "Despite the thousands of Hoosiers who raised their voices to advocate for redistricting reform, the chairmen of both the House and Senate Elections committees refused to hold hearings on redistricting reform legislation.

"While their inaction is both frustrating and maddening, it's not surprising. The super-majorities in both the Indiana House and Senate have been built and maintained through gerrymandering. We knew that without a U.S. Supreme Court ruling outlawing partisan gerrymandering the General Assembly would have little motivation to reform redistricting. And sadly, we were right.

"But the fight for fair maps in 2021 is long from over. We have always understood the difficulty we face in trying to reform redistricting through the legislative process so we formulated a Plan B a long time ago. Now, it's time to put that plan into action.

"Since the General Assembly won't create a public mapping website or a citizens redistricting commission we'll do it ourselves. Over the next few months, we'll be working with the coalition we co-founded back in 2014 – the Indiana Coalition for Independent Redistricting – to create a public mapping website and competition to encourage citizens to get directly involved in redistricting by drawing their own maps. We will hold workshops and other events to give Hoosiers the tools they need to be full participants in the redistricting process in 2021. It's going to be an exciting project – so stay tuned.

To be involved, see: https://www.commoncause.org/indiana/our-work/gerrymandering-representation/

Those of us in attendance on February 6 had a chance to use History Center computers to learn how to draw fair voter district maps.

Coming up at the Eugene & Marilyn Glick Indiana History Center,, April 16, Census; September 3, Voting; October 8, Electoral College. 7–8:30 p.m. each date. Admission is free for members and students, $5 for the public.

Coming up at the Indiana State Museum:

April 16: Courageous Conversations: Trailblazing Women, the Indiana Suffragists. Learn about the bold and daring women in underrepresented communities that were advocating for the right to vote, in celebration of the Indiana Women's Suffrage Centennial. Then, experience the art of women activists in the new exhibit, Cause and Æffect. 6- 7 p.m. Presentation and discussion; 7 - 8 p.m. Explore the exhibit.

April 21: Quirky Queries: Pantsuits & Politics. Learn about items from our collection worn by female politicians. Hear from our curators as they discuss the importance of preserving Indiana history how shifts in fashion throughout history reflect societal changes. Guests will enjoy a happy hour and access to our core galleries before and after our curators speak.