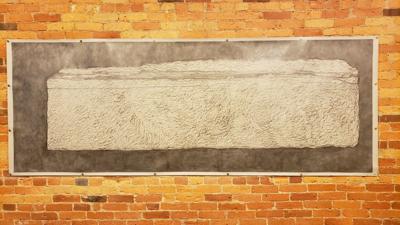 It just struck me that another decade is about to end. Tonight we’ll have the last round of First Friday art openings of the decade in downtown Indianapolis.

After a decade of reviewing gallery shows for NUVO, I still get excited about going out and finding something new and unexpected. Tonight I’m excited about seeing Blasko Artist/Satch Artist at Circle City Industrial Complex, Localized: Creative Impressions of Life in Garfield Park Arts Center, and David Lanch: Visions from Another World at Tube Factory artspace.

My favorite exhibition of the year was Circles: The Renaissance, The Rebirth, The Remix at Gallery 924 in October.

Review: 'Circles: The Renaissance, The Rebirth, The Remix'

Walter Lobyn Hamilton, Mason Archie, and Jay Parnell show their work in one of the best exhibits of the year at Gallery 924.

But there were certainly other contenders, like Alicia Zanoni’s Nice Weather We’re Having, at Harrison Center, a solo landscape show that worked on many levels. Her landscapes not only seemed to communicate interior moods but also current environmental turmoil. Apocalyptic foreboding can also be found in the work of artist Nina Elder, an Albuquerque-based artist whose exhibit The Score is on view through Dec. 8. This was, it just so happens, the latest article that I’ve published in NUVO.

Nina Elder's multi-pronged, mixed-media exhibition investigates the urban environment of Indianapolis, and the people who inhabit it, through the lens of geologic time.

Elder received funding to create her artwork, which focuses on the monuments of Indianapolis, from the IUPUI Arts & Humanities Institute (IAHI), where I’m currently working as a research assistant. The exhibition is partly an outgrowth of IAHI’s desire to build bridges between IUPUI and the surrounding communities. Certainly another expression of that desire is their collaboration with Kheprw Institute, where Maurice Broaddus, author of Pimp My Airship and many other works, is a volunteer. I had the privilege of writing an article on him this fall for NUVO. Like my fellow NUVO writer Seth Johnson, I find myself wearing many hats these days. (I’m also a graduate student in the IUPUI English Department).

The fantasy and horror writer is making waves not just by making exciting fiction but also by being deeply involved in his community.

I have to say that I’m impressed about the mixture of writers that NUVO has brought in over the past six months or so. If you value the increasing diversity of voices that NUVO is bringing to your newsfeed, why not make a contribution?

I also want your input on what stories you think I should cover in 2020.

Have a healthy and happy holiday season, everyone!

A Night of Cutting-Edge Music at Fata Morgana